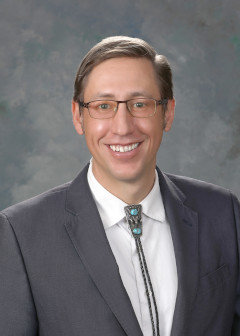 State Rep. Nathan Small, a Las Cruces Democrat, is the new chair of the powerful Appropriations and Finance Committee in the New Mexico House of Representatives.

Small was named chair Jan. 17, as the legislature convened in Santa Fe for a 60-day session. He replaces Patricia Lundstrom, D-McKinley, San Juan.

As chair, Small will guide passage of the largest budget in state history, estimated to be about $12 billion, an increase of more than 40 percent from last year’s budget.

Small was elected to represent House District 36, which is located entirely in Doña Ana County, in 2016, and re-elected in 2018, 2020 and 2022. He previously served eight years on the Las Cruces City Council.

Small, Cadena, Ferrary, Gallegos, Lara, Madrid, Rubio, Jaramillo, Cervantes, Soules, Steinborn and Hamblen are Democrats. Jones, Griggs and Diamond are Republicans. They are all from Las Cruces except Lara who lives in Chamberino; Madrid, Chaparral; Jaramillo, Socorro; Jones, Deming; Griggs, Alamogordo; and Diamond, who lives on a ranch near Elephant Butte in Sierra County.