One retired editor hands off to the next

Two driven by a passion for community news 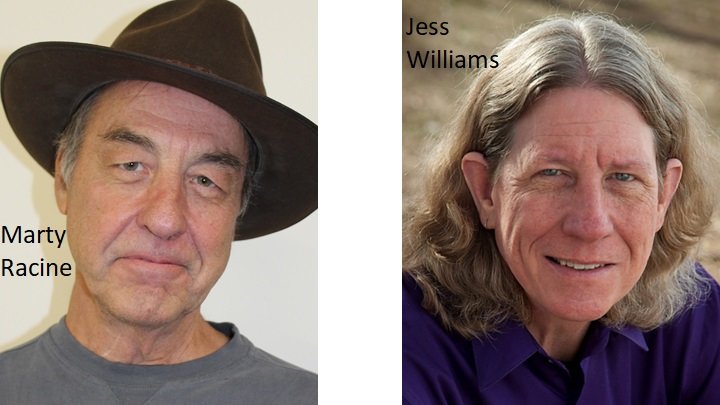 Racine retired as the seven-year editor of the Ruidoso News in 2011 and moved to Las Cruces in 2016 after a five-year break from writing.

In September of that year, Racine found the energy and inspiration in his new hometown to get back to writing. He freelanced for the Bulletin, writing mostly about sports and music.

“The move stirred up another desire to start writing again,” he said.

Then, in December he got a call from publisher Richard Coltharp because editor Brook Stockberger was leaving the newspaper. Coltharp asked him if he was interested in the position and Racine said he had to sleep on it but “I knew immediately that I would take the job,” he said.

“I decided to take it a year at a time,” he said. “I enjoyed it and it went to three years.”

Racine found the Bulletin a good fit for his style of news management. As a weekly instead of a daily newspaper, the Bulletin focuses on features and community rather than breaking news and the scramble of competition.

“That’s kind of my background,” he said. “I left the Houston Chronicle as a music critic and feature writer after 22 years. And that’s the Bulletin’s calling card – features.”

He connected with the Bulletin because he feels it has a demographic that still appreciates paper newspapers; he wasn’t much interested in web journalism.

“The working environment seemed to fit where I was at,” he said. “Homey.”

“We will be doing some open mics around town,” he said. “I want to get serious about it. I really love doing that.”

And this time he will not stop writing. He might write a book, or some feature articles for magazines.

“I want to do more in-depth articles,” Racine said.

On a personal note, he said, “I want to be there for my family and not be running off to work all the time. I will spend time with those who love me, my wife and dogs, and travel might be part of it.”

After Racine gave notice, Coltharp made another call to a close colleague, and another retiree answered the call.

“Richard and I have been friends for a long time, and when a friend asks you to join his team, you have to take such a request seriously,” Williams said. “Being on a newspaper team was the first 16 years of my career and once it gets in your blood, it never goes out.”

Williams retired about a year ago from almost 21 years as director of public information for Doña Ana County. Before that he was in newspapers from 1982 to 1995. His last editorship was in Taos (1991 to 1995).

“Then my father got ill, and I came home,” he said. “I worked on my master’s and earned it in 1997 in communications studies, then worked a year at University Communications and the gig at the county opened up and I took it.”

Williams said he has ideas for the future of the Bulletin.

“I will certainly run those ideas past Richard, and we can see whether they are workable ideas,” he said. “This will be a team effort. I’m not going to ty and go rogue on the Bulletin. I just want to build on what Marty has done here and all the other editors before him.”

The hometown nature of the Bulletin is what draws Williams to it.

“It features the people and events of the Mesilla Valley in a positive way, and I’m really proud to join the team,” he said.