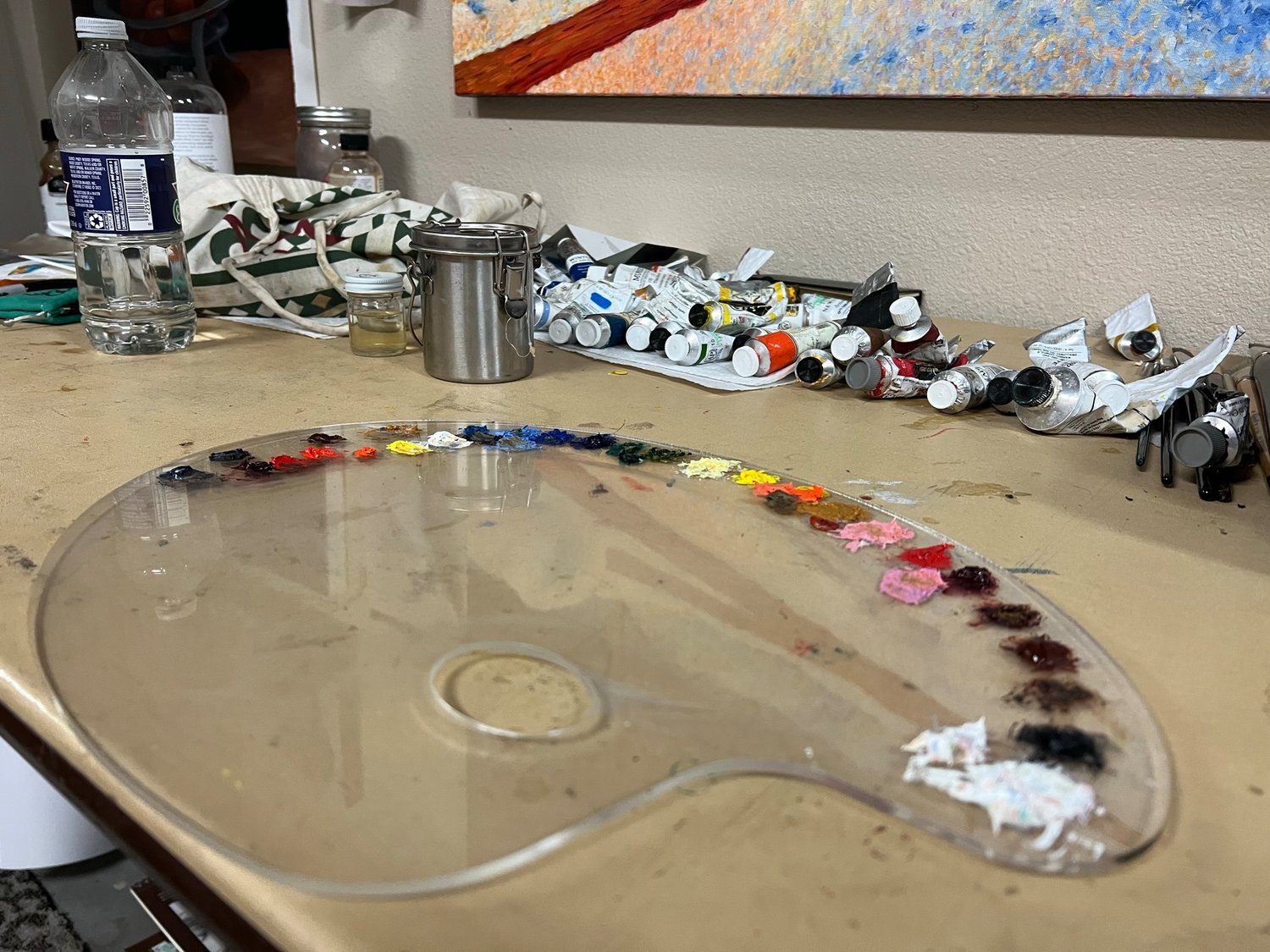 In Allen’s studio his LIFF poster pallet of paint colors await his mixing and blending talent to form detail in his painting.
Photo by Elva K. Österrich 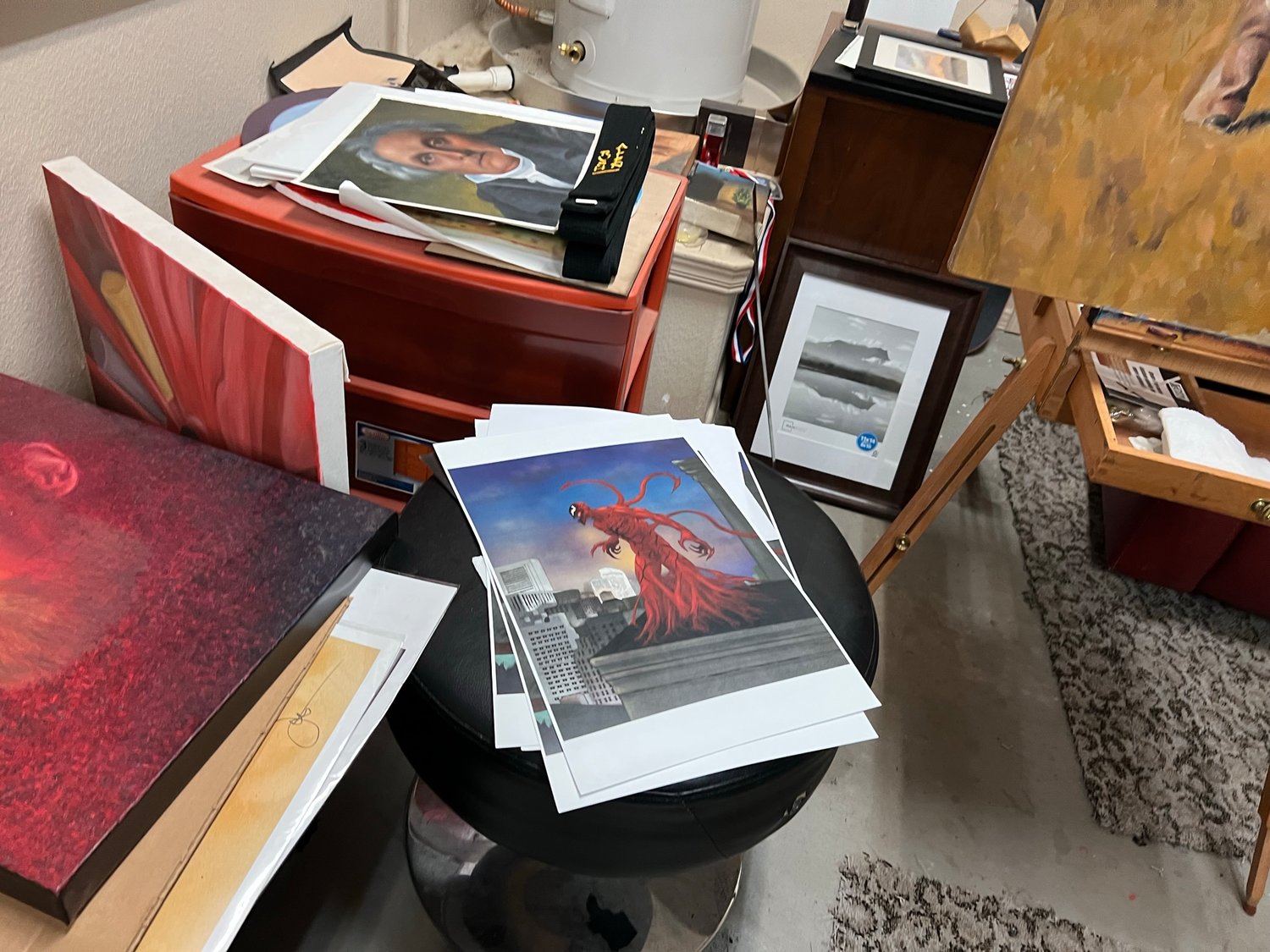 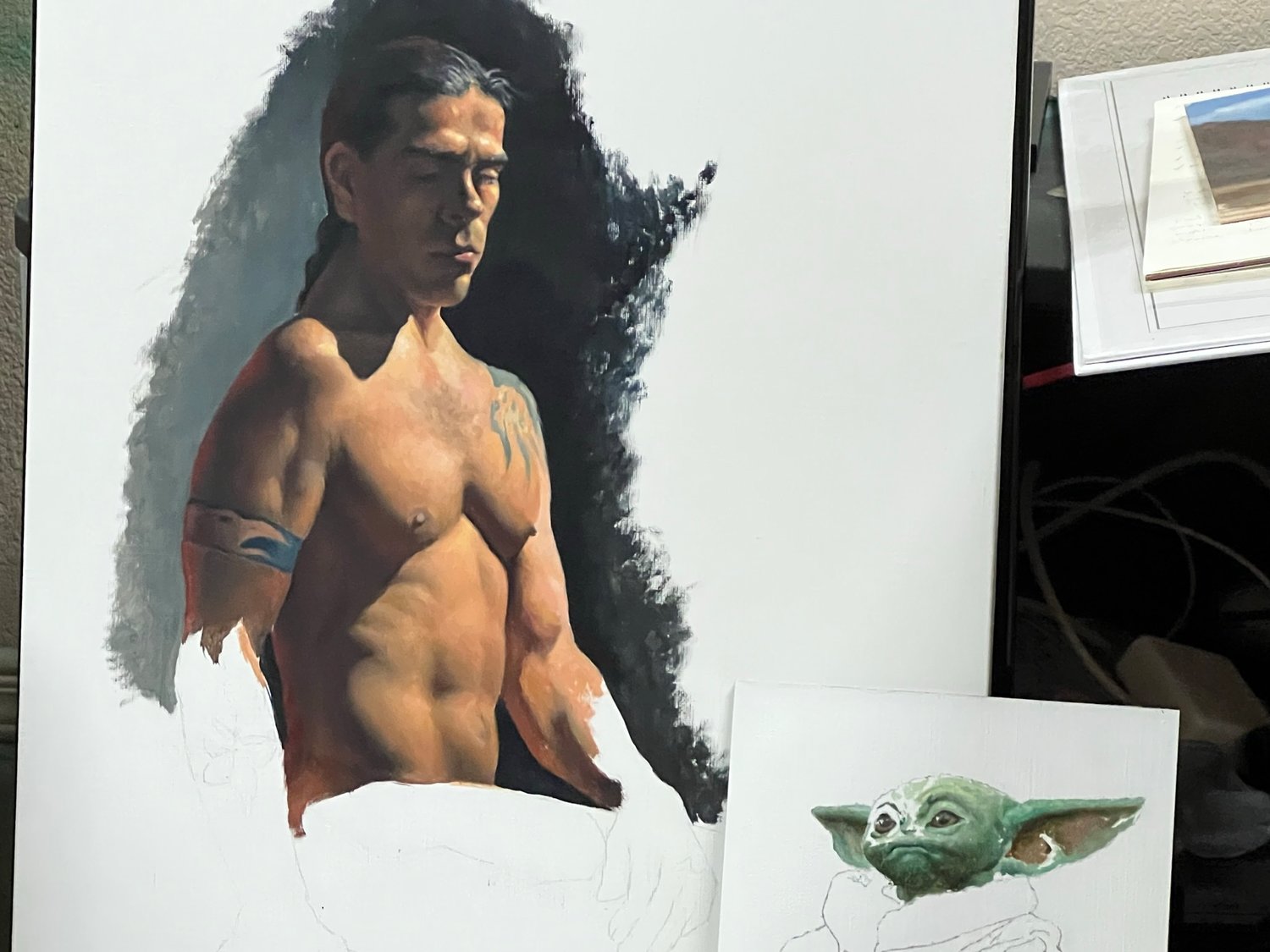 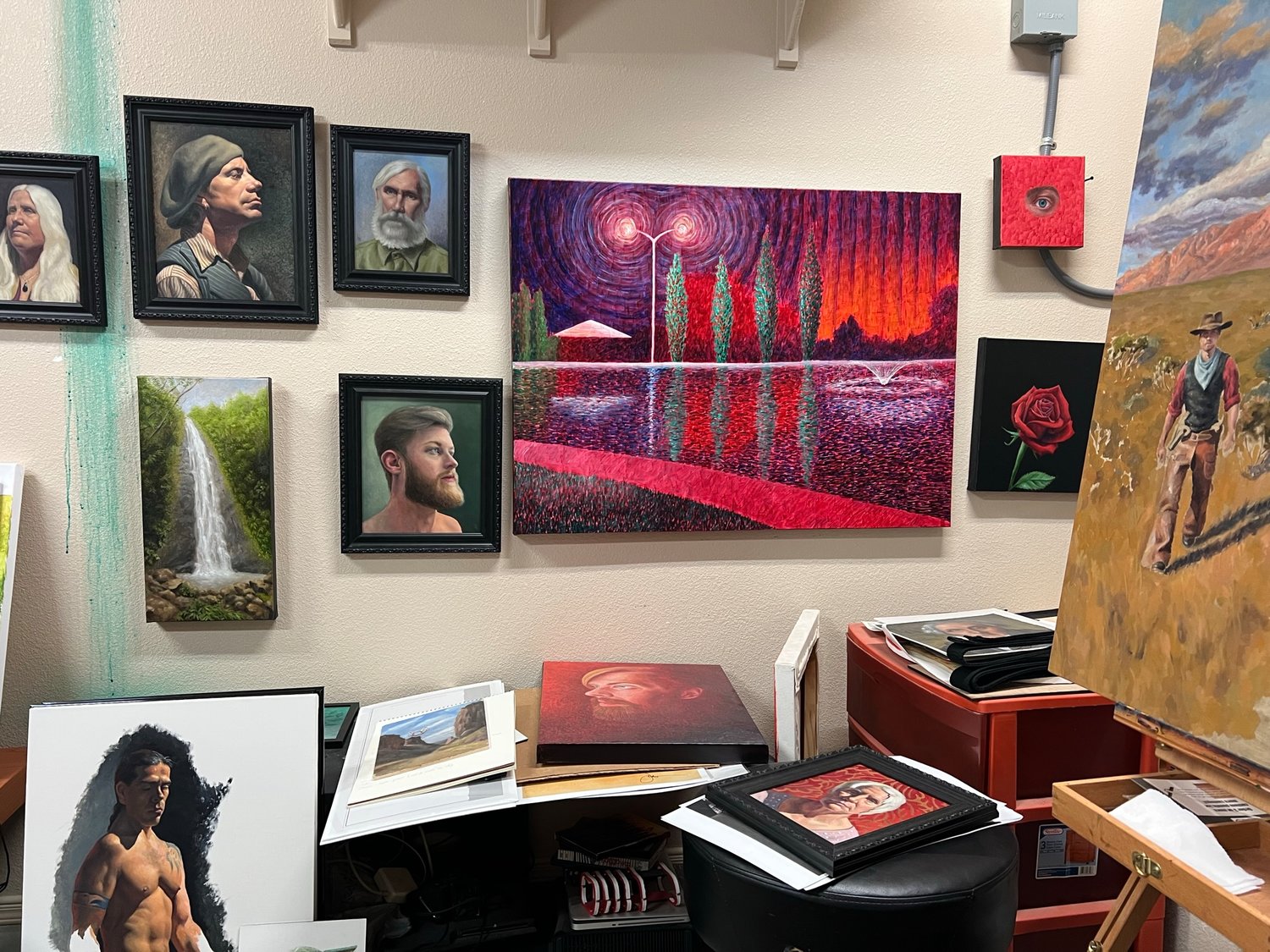 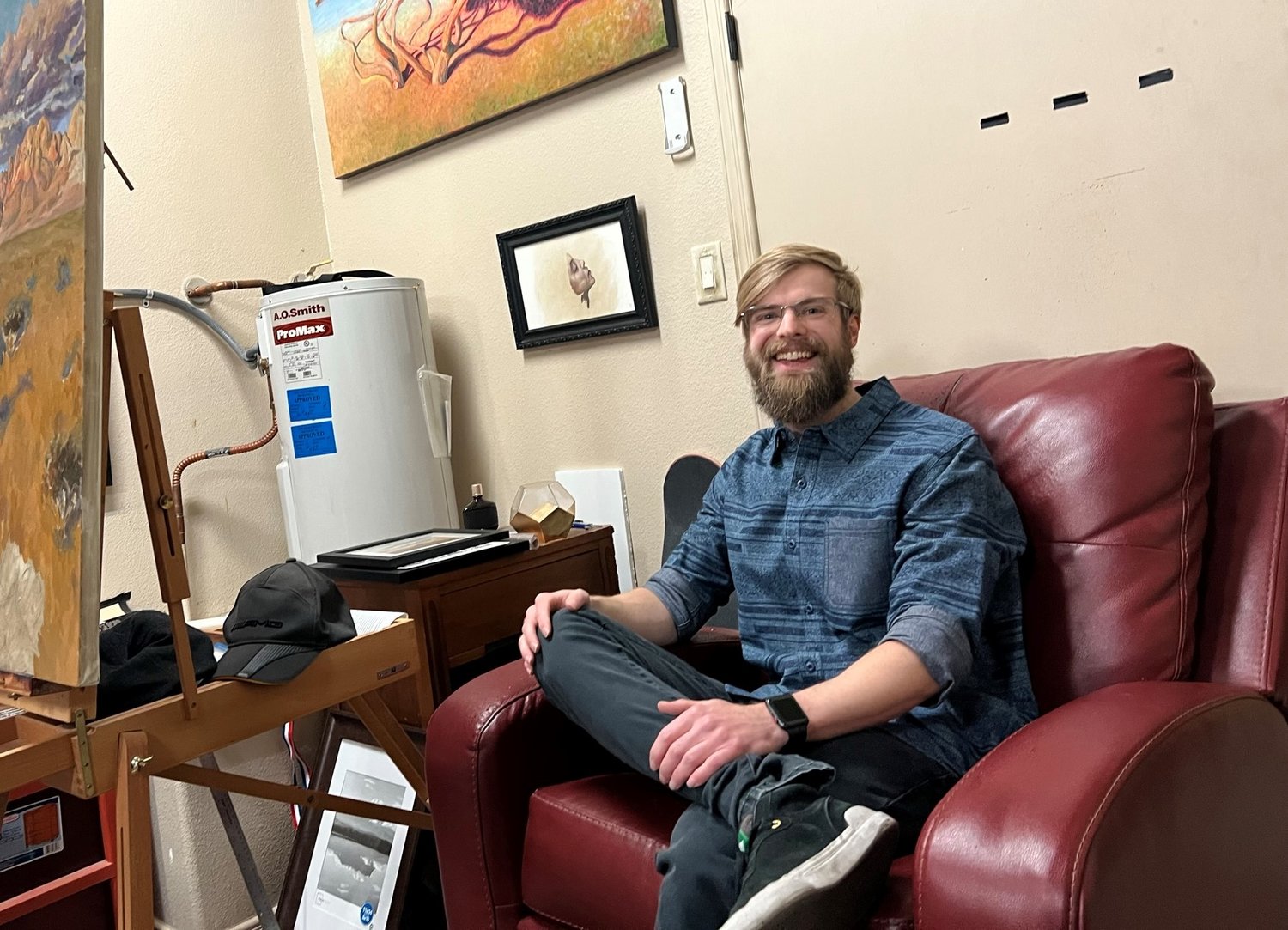 Rush Allen relaxes in his Las Cruces studio space as he talks about his art techniques.
Photo by Elva K. Österrich
Previous Next
Posted Tuesday, January 24, 2023 10:17 am
By Elva K. Österreich

Rush Allen has been “doing art” his whole life.

The young artist, 29, has been chosen to create the artwork for the Las Cruces International Film Festival this year and is busy creating color layers, building chroma on the upcoming work which will culminate with a poster party release Feb. 11.

Allen took all the art classes he could through school and even bought himself a silk screen press. He started creating his own brand and realized he needed to know more about all the programs.

“So, when I went to college, I went into graphic design,” he said.

After earning his associate degree in digital graphics at Doña Ana Community College, which he followed up at New Mexico State University earning a Bachelor’s in Fine Arts.

Interspersing freelance work in graphic design with his art studies and creations, Allen has built a substantial collection of experience and completed a wide variety of work, his love and specialty though is painting l oil portraits with classical realism.

“It’s nice to have a balance,” he said. “My bachelor’s was more contemporary and modern – then I did a school semester in Italy, that was in Florence, and that’s when I started getting into tradition mediums and looking more into art history.”

With Italy in his mind, he wanted to return to Europe and ended up spending sessions at Studio Escalier (a traditional studio learning environment atelier) in France working from live models and continuing his art education.

“In Paris I was doing figure drawings in the morning and then I would go the Louvre and draw there,” he said.

Then he came home and the following week Covid shut down the world.

Allen’s classical realism portraits are full of light and character, the detail keeps going the deeper you look into the pieces. They are painted from live models in stages.

“The models end up becoming my friends,” he said. “The whole thing is you are trying to communicate and express the experience that you have with the model. That’s why you work from life, because you are not copying, you are trying to represent a moment in time.

“You want to capture the light effect and the character of who they are. Everyone is in a different state of mind and that’s what you are trying to capture with working from life.”

Allen considers realism as one of the biggest challenges an artist can take on. But that just makes him like it more. It’s about thinking and analyzing things deeply and understanding nature and how everything is interconnected.

“Every person is a puzzle with unique features,” he said. “Every painting is just a new puzzle you have to figure out – the hue, vale, chroma, structure, composition, light effect.”

Today, Allen spends half his time in Santa Fe, working at a sister studio to the one he went to in Paris.

He sells his work through people he knows and supports his income with the graphic design work. Locations his paintings can be found include Crossland Gallery in El Paso; Laguna Beach, California; Kansas City and more.

For the film festival poster, Allen said he is pulling together a bunch of different references, combining everything together to reflect the roots of film in New Mexico.

“The reason they [the film industry] came here was for the light and the landscape,” he said.  “And then what brought everyone to know New Mexico is film like the westerns, so I wanted to pull a little bit of narrative into that.”

Since he went to NMSU, the poster will also symbolize a message for the students.

“I wanted to represent the journey of life,” Allen said. “Since I grew up here, I have always seen the Organs, the contour, as basically a metaphor for life. They change and they grow and so it feels like the different paths of life. There’s always peaks and valleys.”

“We give the artist total freedom,” Marks said. “You create what you want, tap into whatever inspires you and moves you. It’s one of my favorite parts of the film festival to see what the artists create.”

He said the hints he has seen previewing the 2023 poster proves to be one of the best. While in the past, the official poster party has been held at the Las Cruces Museum of Nature and Science, it is moving to the Farm & Ranch Heritage Museum because the event has been growing so much.

The Poster Reveal Party is 6 p.m.-8 p.m. Saturday, Feb. 11 at The Farm & Ranch Heritage Museum, 4100 Dripping Springs Road, Las Cruces. Allen will be on hand to sign limited edition prints of the poster. The original artwork will be auctioned off at the event.