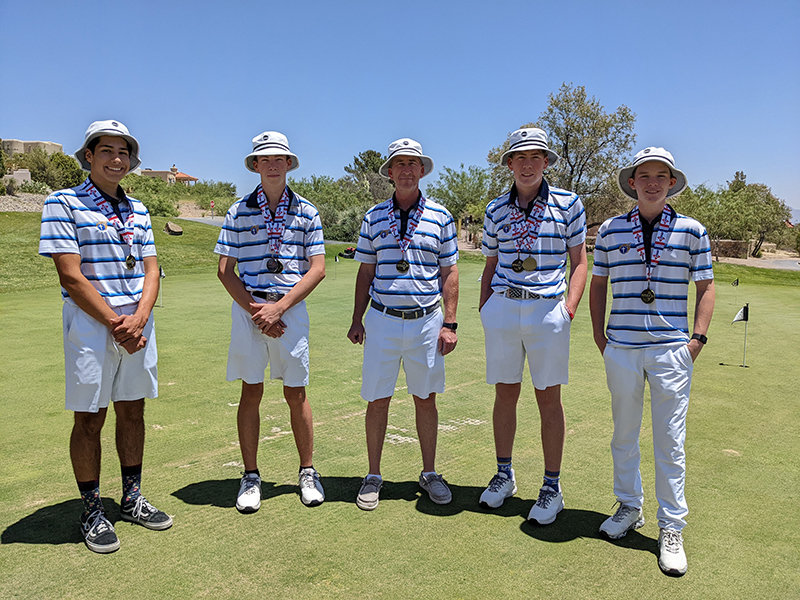 Logan Morris shot a two-day total of 155 on the par-72 Canyon Club course in Albuquerque, while Riley Morris came in at 157.

“I would have been happy for him if he had won,” Logan said. “But it would have hurt in the long run. He would have had that bragging right on me for a while. I’m happy I won. I didn’t want to get ragged on for the rest of my life.”

Riley said his older brother now has family bragging rights and “he uses them every day.”

Both will be coming back to golf next school year for Mesilla Valley Christian, and Riley promises “it will be close next year too.”

Making it even more of a family affair, the boys’ father Chad Morris is the head coach of the team.

For the SonBlazers, it was the first boys state team title in golf since 2005. To put that into perspective, that was the year Logan, the oldest and most seasoned golfer on the team, was born.

Mesilla Valley won a girls team state in golf in 2019.

Besides the Morris brothers, Mesilla Valley got strong outings from its other three golfers who made the trip to state.

“Whenever you set out to do something and are able to achieve your goals and accomplish it, it is just a great sense of accomplishment for the boys,” Chad Morris said.

The first day of the competition was very windy, he said, and the team finished play with a 17-stroke lead.

“I told the boys that they were starting over the second day, like it was day one all over again with the score zero-zero,” Morris said.

The SonBlazers ended up beating second-place Clovis Christian by 49 strokes.

All five Mesilla Valley golfers will be returning next year and there are several other golfers at the school who could challenge that group, Morris said.

“We are looking good for a couple of years,” he said.

Morris said their motto was “Find a Way.” That means if any of the players had a bad shot, a bad round or a bad day of practice, to get past it and find a way to overcome it, Morris said.

Muro said it was gratifying to be part of a state championship team.

Muro said one of the team’s strengths was the friendships they formed over the year.

They practiced every day after school but would get together on the weekend to play golf for fun too, Muro said.

“That helped us bond together even stronger and were able to help each other further,” Muro said.

Barker said he was motivated in part by sibling rivalry too.

“She held that above my head,” Barker said.