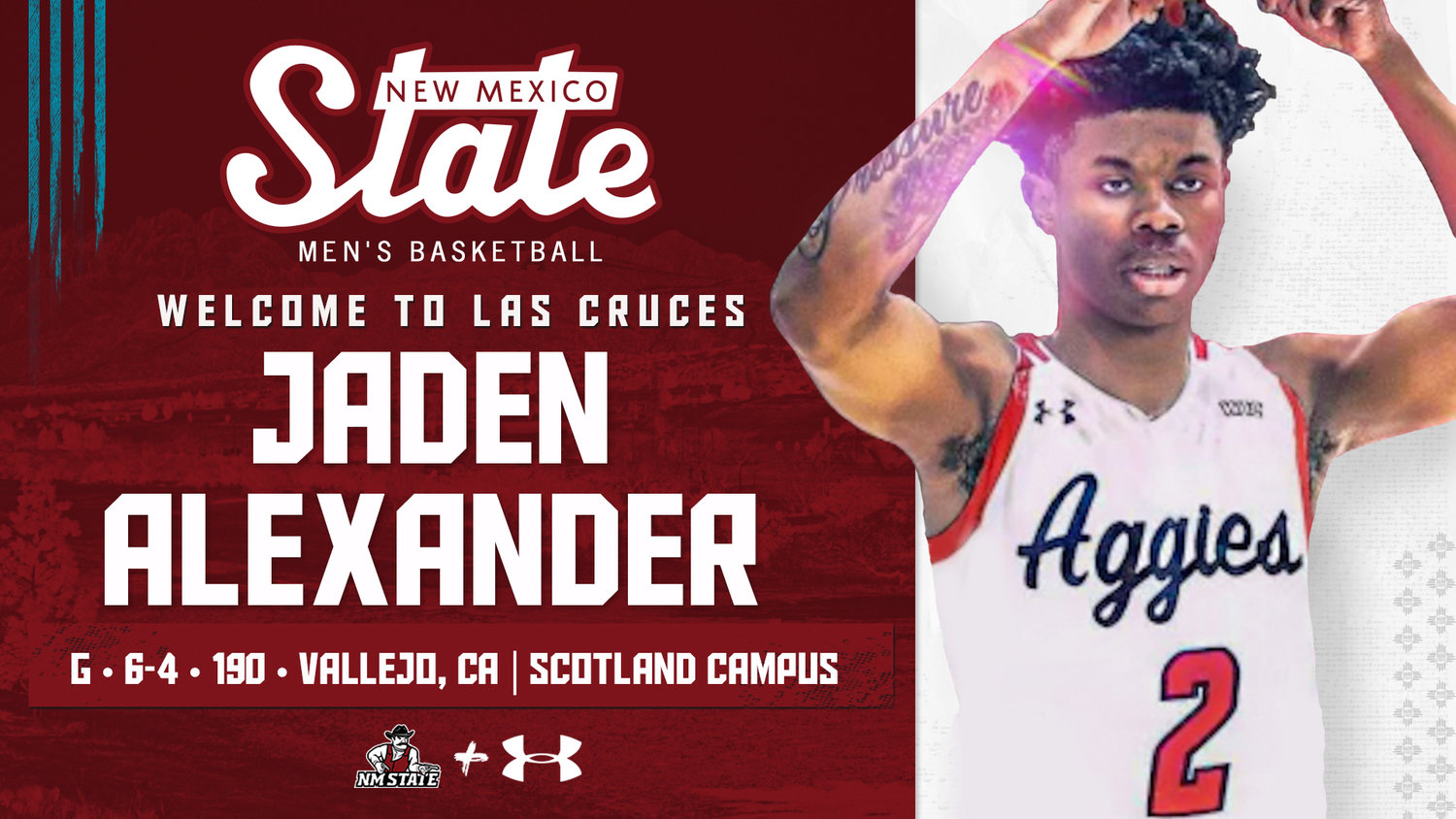 LAS CRUCES, N.M. – With the addition of Jaden Alexander, the Aggies are adding to their already deep group of lengthy guards.

Jaden Alexander | G | Fr. | 6-4 | 190 | Vallejo, Calif. / Scotland Campus Sports
• Spent last year at Scotland Campus – a perennial nationally ranked program in Scotland, Penn., that is consistently loaded with Division I talent.
• His stint with Scotland Campus was highlighted by an outing in which he scored 37 points while using just six dribbles.
• At Scotland Campus, he was coached by Head Coach Chris Chaney who has coached 20 NBA players and NBA draft picks while coaching over 150 Division I players.
• Prior to his stay in Pennsylvania, he played at St. Patrick-St. Vincent High School in his hometown of Vallejo, Calif.
• Opened his senior season with back-to-back 42-point outings and led the Bruins to an overall scoring margin of plus-75 through just two games.
• Due to scheduling limitations, the Bruins were only able to play eight games during the 2020-21 season, however, Alexander took full advantage by averaging 36 points, 13.3 rebounds and 1.7 steals per game.
• His monster stat line also came off a season in which he averaged 19.6 points, 7.9 rebounds and 1.4 steals as a junior at St. Patrick-St. Vincent.
• Scored 20-plus points 16 times and 30-plus four times during his junior campaign, including a season-high 37-point outburst in a win over California power Jesuit.
• In 2019-20, he led SPSV Bruins to a North Coast Section Division III title and pushed his team to an appearance in the Northern California State Championship game.
• His impressive season was enough to warrant the title of Vallejo Times-Herald's Male Athlete of the Year in 2020.

What they're saying about Alexander
NM State head coach Greg Heiar | "I'm really excited to announce Jaden Alexander to this class! He had a tremendous year at Scotland Prep while playing for Coach Chaney and Coach Sullivan. His character, work ethic, skill set, love for the game and winning approach to every day really stood out during the recruitment process. He's a young player that will bring it every day and every play and comes with a listen, try, apply and complete approach. His size, athletic ability and versatility allow him to play all over on offense to guard multiple spots on the defensive end. Aggie Nation, this young man will be a joy to watch! #AggieUp"

For complete coverage of NM State men's basketball as the Aggies prepare for the 2022-23 season, visit NMStateSports.com - the official home of Aggie athletics - and follow the Aggies on Facebook (NM State Men's Basketball), Twitter (@NMStateMBB) and Instagram (@NMStateMBB).