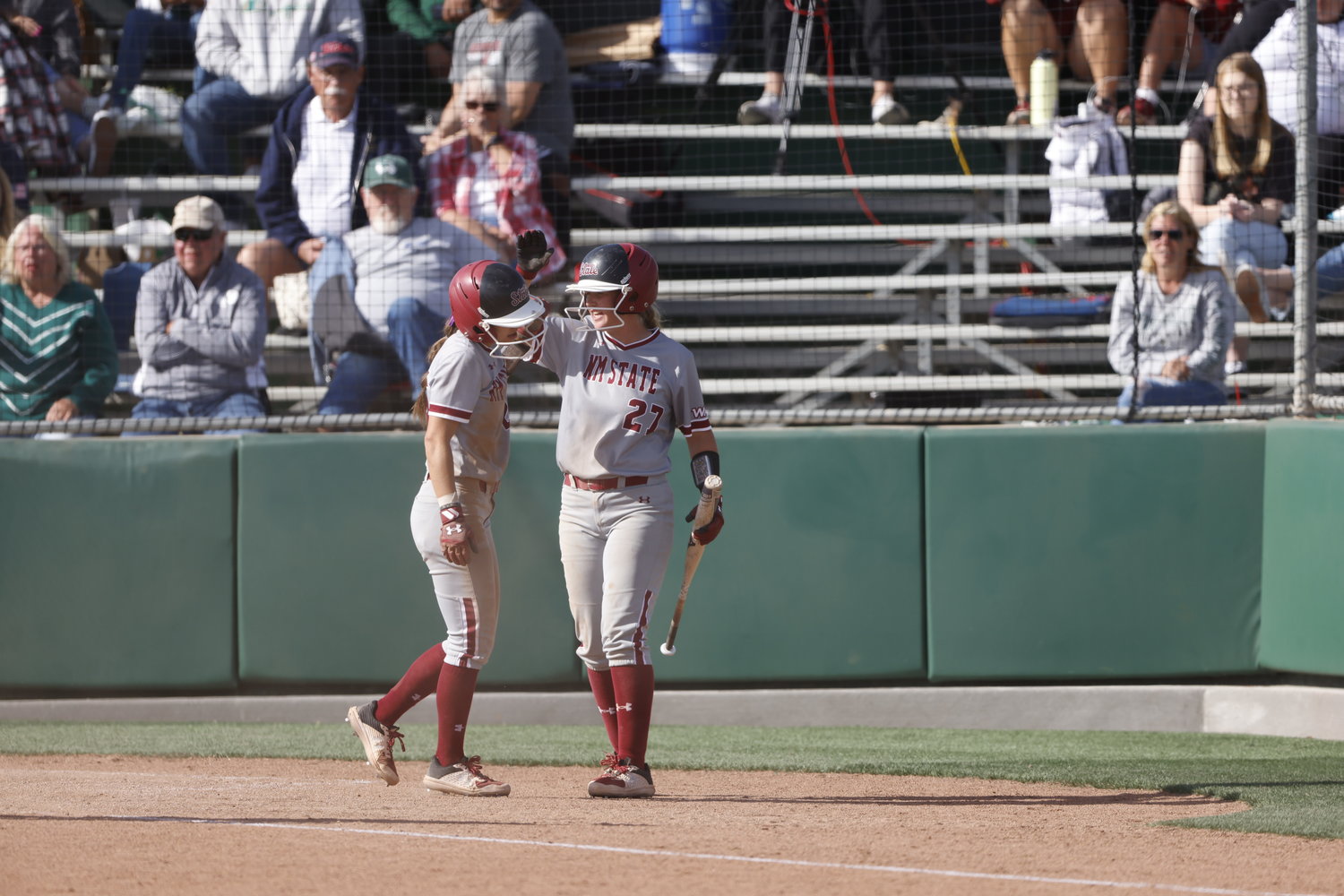 OREM, Utah – NM State combined for 14 runs across a pair of afternoon contests as they split the day with Utah Valley. After dropping the opener, 8-5, the Aggies responded by taking game two by a score of 9-8 to even the season series with the Wolverines.

GAME ONE
Freshman Laurali Patane got the start in the circle for the Aggies in game one and after the Wolverines loaded the bases in the bottom of the first inning, she was able to keep all three runners on base. She also collected her first strikeout of the day in the first.

The Aggie offense got going in the second inning as Hannah Lindsay and Ramsay Lopez each singled to start the inning. With Lindsay and Lopez both on base, Paige Knight hit a three-run shot over the wall in center to put the Aggies ahead.

The Wolverines were able to respond in the bottom of the fourth inning and after scoring one run, UVU hit a three-run home run of its own to go ahead 4-1. One inning later, Utah Valley added two runs as a single plated two UVU runners.

NM State was then able to add to its total in the fifth inning thanks to a leadoff home run off the bat of Kayla Bowen.

The bottom of the sixth inning belonged to Utah Valley as it scored two insurance runs after the first five batters reached base.

In their final scoring opportunity, Jillian Taylor smashed an opposite-field home run on the second pitch of her fourth at-bat to cut into the UVU lead. However, this would serve as the Aggies' final run of the first game, falling 8-5.

GAME TWO
After pitching 2.2 innings in the first game of the afternoon, Jordin King earned the start in game two.

Identical to game one, the Aggies were the first side to light up the scoreboard in the second game – scoring four runs in the first inning. The four first-inning runs were the most in the first frame for the Aggie since March 19 in a game versus Grand Canyon.

The first run of the game came when Ramsay Lopez singled through the left side to score Jillian Taylor who was located on second base. This started a chain of five-straight singles for the Aggies. Gabby Aragon's, Riley Carley's and Melika Ofoia's singles also plated runs on three straight at-bats to give the Aggies a 4-0 lead with just one half-inning in the books.

In the circle, King did her job by keeping the Wolverines scoreless through the first two innings. This six-out stretch included managing a three-up, three-down bottom half in the second inning.

Utah Valley finally had reason to celebrate in the third inning when its three-spot hitter connected for a three-run home run and cut the Aggie advantage to one run.
With no hesitation, the Aggies responded as Jillian Taylor singled up the middle in the top of the fourth, allowing Carley to come in to score NM State's fifth run of the contest. The Aggies would increase their lead to 6-3 when a wild pitch opened a window for pinch runner Savannah Bejerano to score from third. Utah Valley would then get one back in the bottom half.

NM State then threw its own counter punch as it made its way onto the scoreboard in the top of the fifth inning. Riley Carley blasted a ball that flew down the left field line, leaving onlookers only wondering if it would stay fair. It did indeed stay fair, giving the Aggies an 8-4 lead.

In the sixth, Ramsay Lopez hit a sacrifice fly to allow Jillian Taylor to touch home for the second time in the game, leaving the Aggies up by five runs after six at-bats.

The sixth would be the Wolverines' best inning and would ultimately allow them to climb back in the game. They would post their first crooked number since the sixth inning as they scored three runs to reduce the Aggie lead to two runs.

The Aggies were held scoreless in the top of the seventh, giving UVU a last-ditch effort to score two runs in the regular-season finale. After an error would allow the Wolverines' eighth run to score, Felicia De La Torre crushed the hearts of UVU fans when she struck out the final batter of the game to give the Aggies their 11th win on the season and sixth win in WAC play.

UP NEXT
The Aggies now await the release of the 2022 WAC Tournament bracket. Then, they will find out who their opponent will be as they begin their quest for a fifth WAC Tournament title. This year's version of the conference tournament will take place in Huntsville, Texas, on the campus of Sam Houston from May 12-14.