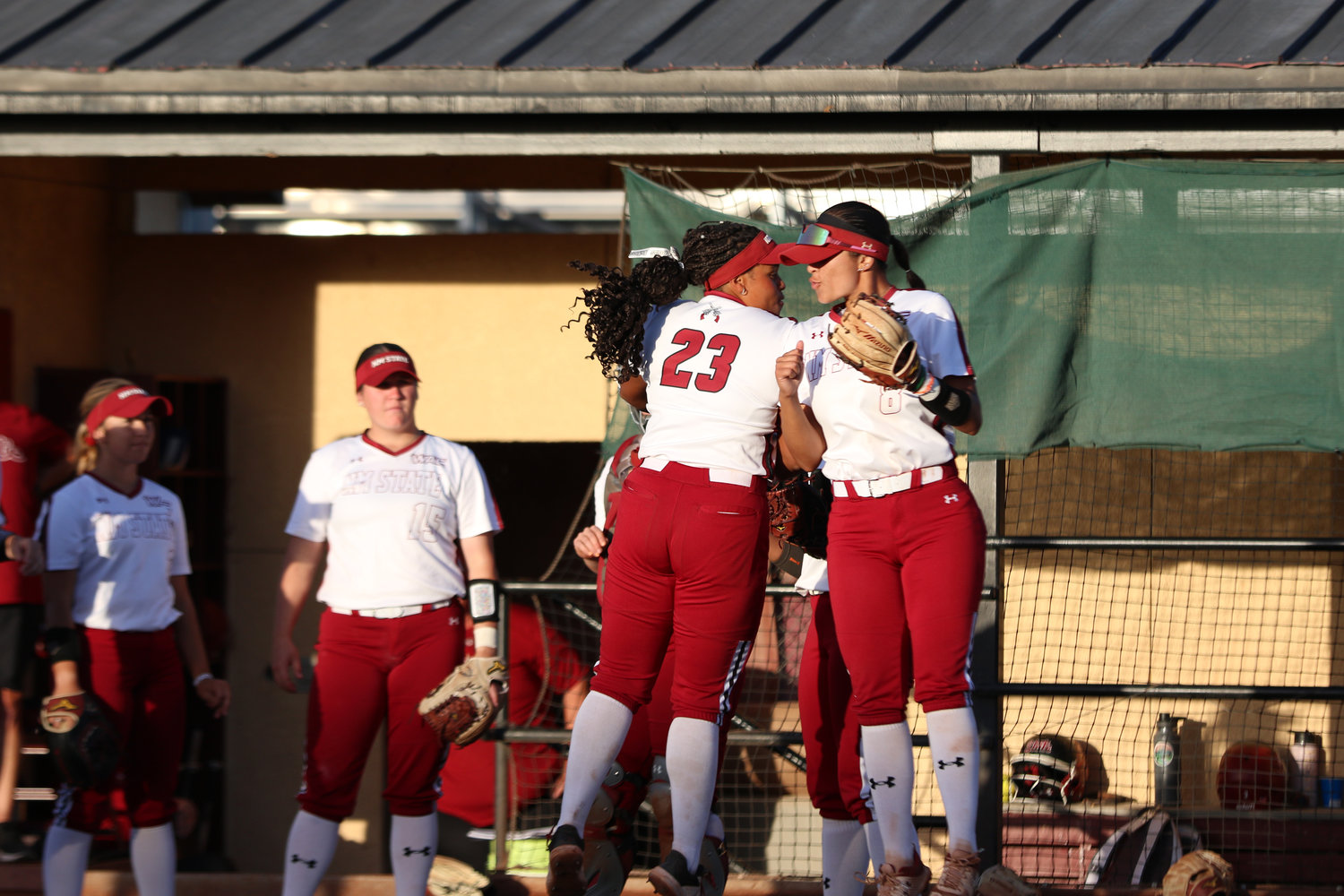 LAS CRUCES, N.M. – Jordin King started, dominated and finished the Aggies Friday night affair versus Seattle U as NM State went on to hand Seattle U just its third WAC loss on the season – taking game one by a score of 8-1

The aforementioned King highlighted the night by throwing the third complete game of her previous three outings while striking out a career-high seven batters. The freshman from Pomona, Calif., collected her sixth win of the season and gave up zero extra-base hits on the night.

Meanwhile, the Aggies' offense did more than its share as they scored eight runs – seven of which came against Seattle U starter Stefanie Madrigal who entered the night leading the WAC in earned-run average and wins. The seven tallies tie for the most runs any offense has compiled with Madrigal in the circle. This also marks just the seventh time the Redhawks have allowed eight or more runs in 36 games this season.

Leading the charge for the Aggies was designated player Paige Knight who finished the night 2-for-4 at the plate and a pair of RBIs, including one home run. Riley Carley also homered and brought across two runs as she hit a two-run shot in the bottom of the second to open the scoring. Meanwhile, Hannah Lindsay, Maya Martinez and Kayla Bowen also turned in multi-hit performances as all three Aggies recorded two hits in the Friday contest. In total, eight different Aggies registered a hit – including Jillian Taylor who pushed her hit streak to 18 games.

SECOND INNING
After both offenses failed to score a run through an inning and a half, the Aggie bats were the ones to get things rolling. Maya Martinez got the action started by singling up the middle to lead off the inning. Riley Carley and Paige Knight followed her by hitting back-to-back home runs to right-center field giving the Aggies the early 3-0 lead. Hannah Lindsay kept the line moving with a one-out single up the middle. Aragon then struck out bringing Jayleen Burton up to the plate with one out in the inning. Burton reached on a fielder's choice after an impressive 15 pitch at-bat which saw her foul off 11 pitches, but the lead runner was tagged out giving Seattle U two outs. Ramsay Lopez and Jillian Taylor were both able to get on to load the bases, but three runs were all the Aggies would get in the inning as Stephanie Madrigal was able to escape the jam.

THIRD INNING
Jordin King was back in the circle for the Aggies for the third. She started the inning by striking out the leadoff hitter giving her three strikeouts for the day. The next two batters proceeded to walk and then single putting two runners on base with one out. This was the first hit of the game given up by King. The only runners to have reached prior to this point reached via the walk. It seemed like the Redhawks had a rally brewing but King was able to work her magic again and escape the inning scoreless.

In the bottom of the inning, the Aggie bats got right back to work. The Aggies had two runners on base early in the inning after a Maya Martinez walk and a Paige Knight single. Hannah Lindsay then singles up the middle driving in Tanori from second, who was pinch-hitting for Martinez. Aragon then hit a hard ground ball to the second baseman who couldn't collect the ball cleanly allowing Paige Knight to score from third. That would be all the runs the Aggies would score in the third giving them a 5-0 advantage over the Redhawks.

FOURTH INNING
The Redhawk offense continued to be stalled by Jordin King's great pitching. They were able to get a couple of runners on the bases again, but it was the same old story as the Redhawks could not plate any runs. The lead was still 5-0.

The first three batters reached for the Aggies in the bottom of the fifth. Taylor and Bowen both reached via single. Martinez reached on a dropped fly ball by the second baseman which advanced Martinez into scoring position and scored Taylor. Riley Carley then advanced both runners into scoring position on the ground out and then Knight drove in Bowen with a ground out of her own. The score was 7-0.

SIXTH INNING
After a scoreless fifth by both teams, Jordin King was back for another inning. After two quick outs, the third hitter of the inning singled and then reached second on a fielding error. A wild pitch and a single then allowed the first and only Redhawk run to score making the score 7-1.

Bowen led the bottom half by singling to the shortstop. Maya Martinez followed by tripling down the left field line scoring Bowen all the way from first base. The Aggies only needed one more run rule Seattle ending the game a half inning early. However, the run never came across, setting up King to finish the game herself.

SEVENTH INNING
Two outs appeared on the scoreboard in the top of the seventh nearly before Aggies fans could blink as the first two Redhawk batters went to the dugout following first-pitch swings. The leadoff, Viggiano, grounded a ball back at King while Wilson hit a ball on a rope, but was hit directly to Taylor in centerfield. After Nance notched the Redhawks' sixth hit of the night, King got Hill to hit a high pop out to Martinez at second base – ending the inning in just six pitches and giving the Aggies the win.

UP NEXT
NM State is set to retake the field for the remaining two games of the series tomorrow evening when they kick off a doubleheader at 4 p.m. at the NM State Softball Complex.