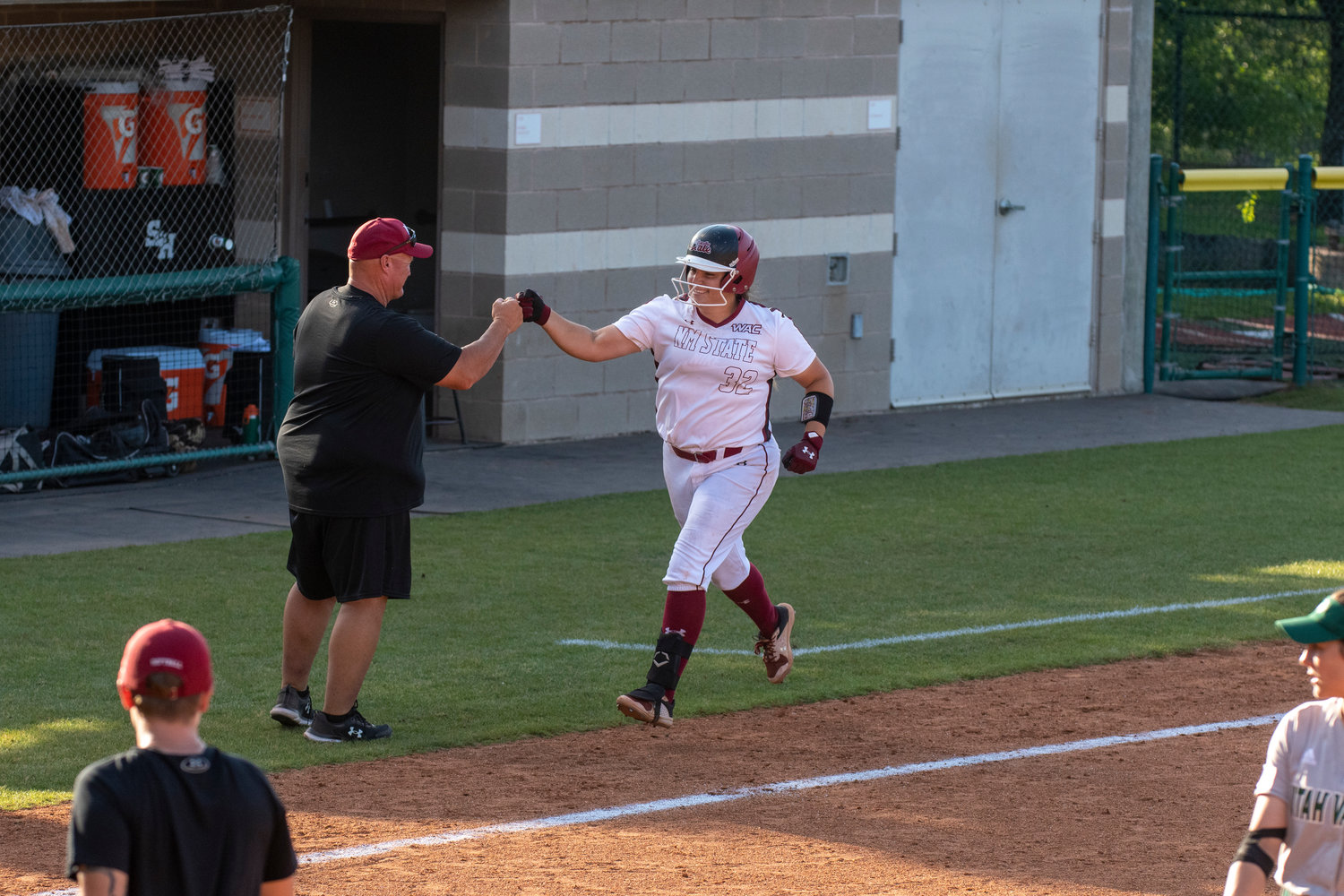 Ramsay Lopez hit a walk off homer vs Utah Valley in the WAC tournament May 12.
NMSU Athletics
Posted Friday, May 13, 2022 6:40 am
From NMSU Athletics

HUNTSVILLE, Texas – No quit. That is the energy this team has brought this week. For the second consecutive day, the Aggies fought back to win an elimination game after trailing in the sixth inning or later. Thursday's 5-4 victory came over No. 5 Utah Valley – a team they saw seven times this season including Thursday's WAC Tournament matchup.

"We decided we were starting a new chapter in the tournament and we're just coming to play every pitch and we believe if we do that, great things can happen," said Head Coach Kathy Rodolph.

As she was Wednesday, Ramsay Lopez was the hero once again as she got ahold of a pitch in the first at-bat in the bottom of the seventh inning to give the Aggies the walk-off win.

"Ramsay is a huge leader on this team and as a coach, you love to see those kids come up in that type of situation because she is a heck of a player," noted  Rodolph.

Jordin King made her 24th start of the season and her fifth start versus Utah Valley this season. She would start off on a good note as she held UVU scoreless in the first, allowing the Aggies to throw the first punch.

That punch came in the form of a two-run first-pitch home run off the bat of Kayla Bowen in the bottom half of the first.

Utah Valley responded as a double hit by Danye Albritton put runners on the corners before a single would drive in the opposition's first run of the game.

A second Wolverine double in the top of the third drove in another run to tie the ball game. The Aggies would then take a 3-2 lead in the bottom half with a run of their own.

Madison Muxen notched a single to start things off in the inning before Jillian Taylor singles through the right side and Ramsay Lopez reached on a fielder's choice. However, that fielder's choice did not result in an out and Madison Muxen would reach safely thanks to an error by the Wolverine third baseman. With the bases loaded and none away, Kayla Bowen popped a hit over the second baseman to bring in Muxen and collect her third RBI of the game.

The fifth-seeded Wolverines continued to capitalize off doubles as their third double in as many innings resulted in their third run of the game while also leveling the score a three runs apiece in the fourth.

A scoreless fourth inning from the Aggies would set up for Utah Valley to take its first lead of the game as pinch hitter Megan Gibbs entered the contest and doubled to left center, allowing a UVU runner to score from second.

The Aggies then found themselves in an identical position as they were on Wednesday – trailing 3-4 entering the sixth inning.

Laurali Patane, who entered in the fourth inning, kept the Wolverines off the board in the sixth to allow NM State to face just a one-run deficit with two at-bats left. The seven-eight-nine hitters for the Aggies were due up and accomplished more than enough as both Hailey Tanori and Melika Ofoia hit singles to put the go-ahead run at first. Kristen Boyd would then hit a fly ball to centerfield that allowed Tanori and Ofoia to advance. A grounder hit to the pitcher off the bat of Madison Muxen would then give the speedy Tanori a opening to score from third and tie the game at 4-4.

After Patane pitched through a one-two-three inning, the Aggies' heart of the lineup was due up with WAC home run champion Ramsay Lopez to lead off. After serving as the hero in Wednesday's win, she kept it simple for the Aggies as she hit her 17th home run of the season to walk it off for the underdog Aggies.

UP NEXT
The Aggies now get set for a day three matchup with Seattle U who took out Abilene Christian in the other half of the loser's bracket. This will be the second time that the Aggies and Redhawks face off in the 2022 WAC Tournament. Not only are the Aggies familiar with seeing the Redhawks in this year's tournament, but they have also squared off with Seattle U in the previous two WAC Tournament Championship games. First pitch is scheduled for 3 p.m. MT.

QUICK HITTERS
· The walk-off win was just the Aggies' second of the season with the first being in an 8-7 win in eight innings over Grand Canyon at home on March 18.
· Ramsay Lopez increased her home run total to a WAC-best 17 while pushing her total in WAC Tournament games to three.
· In seven games versus Utah Valley this season, six different Aggies finished with batting averages above .400, including Kayla Bowen who posted a .481 average with 13 hits and 11 RBIs versus UVU this season.
· Bowen is also batting an impressive .444 this tournament and is tied with Ramsay Lopez for the team lead in RBIs with three.
· The victory marks Kathy Rodolph's 31st WAC Tournament victory as the leader of NM State.
· Wednesday also served as Bowen's 19th multi-hit game of the season to lead all Aggies.