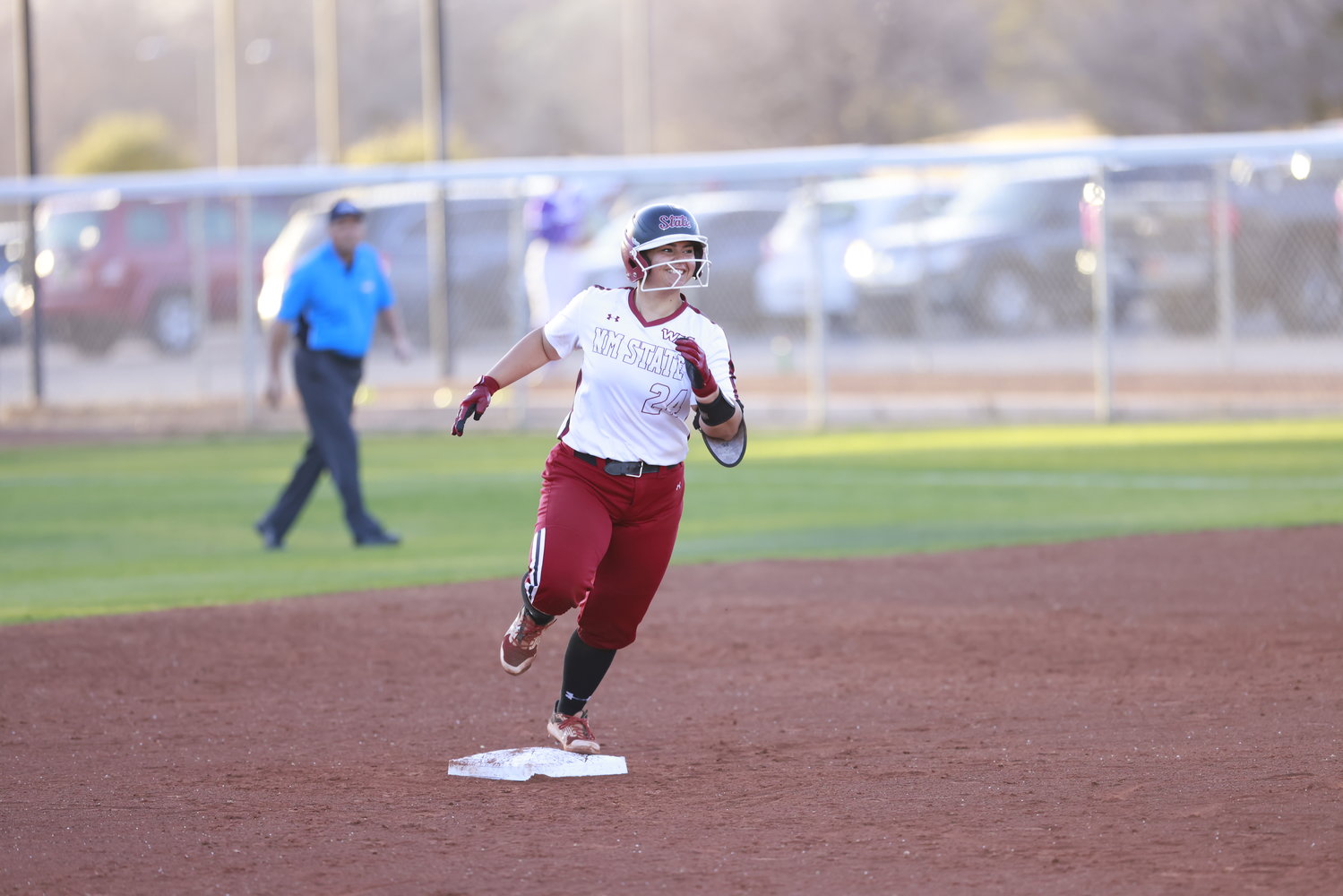 First Pitch
NM State opens its road series against Grand Canyon Friday with a doubleheader beginning at 5:30 p.m. while game three is set to start Saturday at 2 p.m.

The Aggies are coming off a series loss against Dixie State, dropping the first two games on the road against the Trailblazers before taking the final game on Saturday by way of a 10-9 victory. With the win, head coach Kathy Rodolph recorded her 750th career win, 554 of them as the skipper of the Crimson & White. In the Aggies' lone victory of the weekend, Laurali Patane pitched 6.2 innings - her longest outing of the season. This also notched her first win of the year.

Additionally, six different Aggies turned in multi-hit performances led by Ramsay Lopez's two-hit, five-RBI performance. Hailey Tanori went 4-for-4 with a pair of stolen bases, while Madison Muxen, Kayla Bowen, Hannah Lindsay, and Paige Knight each added a pair of hits on the day. Combined, the heart of the Aggies lineup (Lopez, Bowen, Gabby Aragon, and Lindsay) went 7-13 with three extra-base hits and nine of the Aggies' ten RBIs.

Where to Watch
The three-game tilt between the Aggies and the 'Lopes will be featured on ESPN+, fans can also keep up with live stats of all three matches with links available on our website.

Legend in the Dugout
Kathy Rodolph has had a remarkable career as the head coach of the Aggies. In her 19th year at the helm, Rodolph is the winningest coach in NM State history with a 554-467 record. She's led the team to four WAC Tournament Championships and six WAC Regular Season Championships, including last season when the team went 14-4 in conference play. She is also a five-time WAC Coach of the Year. She has helped the Aggies capture the last eight WAC player of the year awards and back-to-back WAC Freshman of the year awards. Additionally, Rodolph has helped 17 players earn NFCA All-Regional Team honors.
Aggie Rundown
Prior to WAC play, the Aggies' struggles were somewhat reflective of the level of competition they faced as their schedule featured six games versus Power Five opponents, two teams ranked inside the top-25 and three squads that participated in the NCAA Softball Tournament one season ago.

In last weekend's series versus Dixie State, the Aggies were led at the plate by Hannah Lindsay and Kayla Bowen who each tallied five hits over the three-game stretch. Lindsay finished the weekend 5-8 with three RBIs while Bowen earned her five hits in nine at-bats. Bowen drove in four RBIs against the Trailblazers as she added one home run to her season total and hit a pair of doubles. Ramsay Lopez was also dialed in at the plate as she brought in a team-high five runs on three hits.

Two other Aggies also recorded five hits in St. George, Utah, as Hailey Tanori and Madison Muxen had a handful of hits.

In the circle, Laurali Patane earned the Aggies' lone win as she led the Aggies to victory on Saturday and posted a total of 11.0 innings on the weekend.

Statistically Speaking
Jillian Taylor has become one of the WAC's top hitters as her batting average of .393 ranks sixth in the league. Taylor's hit streak finally came to a close on April 8, after 19 games - tying her for the longest hit Aggie hit streak since 2007 when Amber Olive also went 19 games with a knock.

Through 15 games in conference play, the Aggies rank first in home runs (23) and second in slugging percentage against league opponents (.543).

Taylor on a Tear
Although her historic streak is over, sophomore utility player Jillian Taylor put together one of the hottest stretches NM State fans have seen in years.

She managed a 19-game hit streak that began on March 8, in a home game against I-10 rival UTEP. During her streak, she had six multi-hit games, five doubles and a trio of home runs.

In the 20 games this season in which Taylor has registered two at-bats or more, Taylor has only failed to tally a hit in two games.

After being in and out of the lineup for the first six games, Taylor has been a staple in the starting lineup since March 5. In 30 games this season, the Spokane, Wash., native has posted a batting average of .416 - a team-best among hitters with at least 30 at-bats.

Scouting Grand Canyon
The Lopes enter the series with an overall record of 30-10, sporting a conference-best 13-2 record in WAC play. The Aggies represent one of those losses, NM State taking an 8-7 victory on March 18th in Las Cruces.

History vs. Grand Canyon
In the series' first 29 games, the Aggies have won 18 of the games. Averaging 6.1 runs per game when they face off. In the previous 10 matchups, the Aggies have come out victorious in seven games. The Aggies are 4-5 against GCU on the road while posting an 11-6 record against the Lopes at home.

The Aggies and 'Lopes met about a month ago at the NM State Softball Complex, NM State recording an 8-7 victory of game one in the series before dropping the last two games of the series.