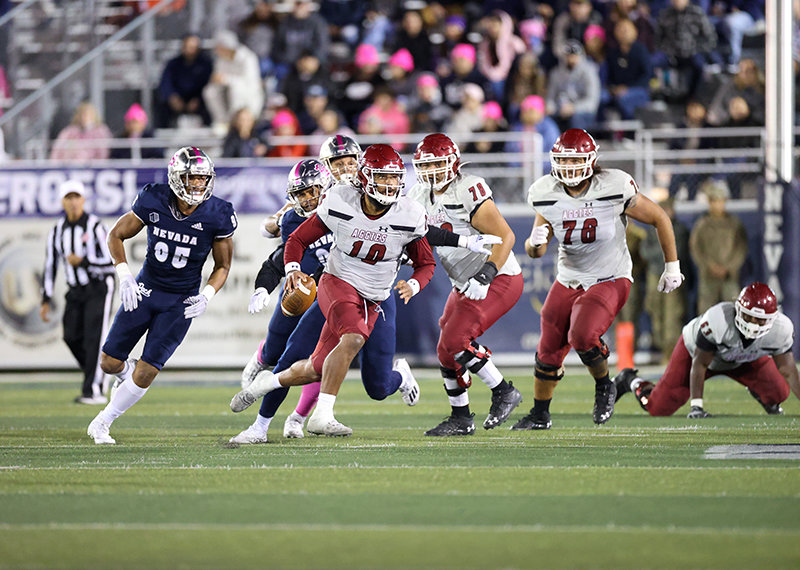 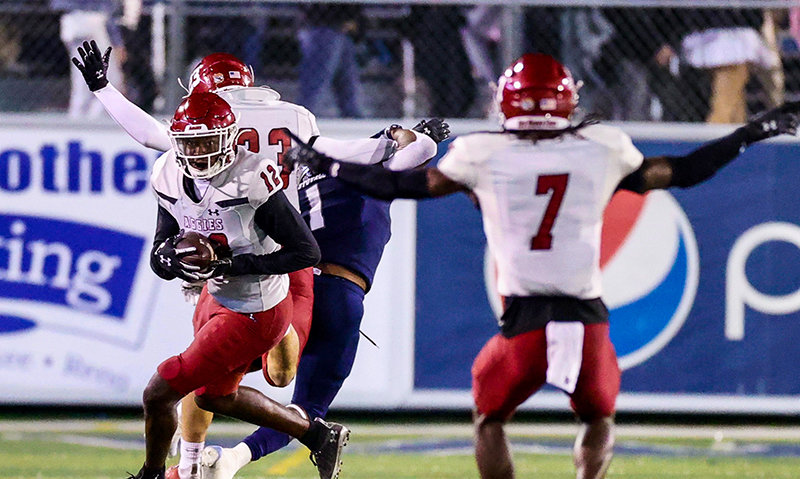 Holding a powerful offense in check for the first 15 minutes, the NM State football team jumped out to an early 7-0 lead only to see Nevada answer by scoring the game's next 52 points in a 55-28 setback for the Aggies Saturday night at Mackay Stadium.

In the setback, NM State (1-6) QB Jonah Johnson completed 38-of-62 passes for 425 yards and three passing scores. Johnson also added a fourth-quarter rushing score. Johnson became the first Aggie since Josh Adkins to throw for over 400 yards in a contest. Adkins threw for 402 yards against Liberty back on Oct. 6, 2018.

HOW IT HAPPENED
Taking the fight right to the projected Mountain West Conference champions, Jonah Johnson marched the Aggies 44 yards down the field on the game's opening drive. Jared Wyatt was a favorite target of the Aggies' signal-caller, latching on to two balls for 22 yards through the game's first two plays. On the ground, it was Juwaun Price who helped NM State get off to a strong start by adding a 16-yard scamper on the visitors' first drive. Though Ethan Albertson missed a 47-yard field goal to cap NM State's drive, the Aggies didn't have to wait long to get the ball back.

On the Wolfpack's second play from scrimmage, Caleb Mils picked off Nevada (4-1) quarterback Carson Strong. That pick gave the ball back to NM State in Nevada territory. Aided by a 15-yard personal foul penalty by the hosts, NM State drew first blood when Johnson hit Wyatt for a 19-yard touchdown strike with 8:59 to go in the opening quarter.

Nevada managed to chip away at the Aggies' lead when Brandon Talton drilled a 41-yard field goal with 1:41 to go. The score was the only one the Aggies would allow in the first half, as NM State held the high-flying Nevada offense to just eight yards of total offense over the course of the first 15 minutes.

In a role reversal, it was NM State who struggled on offense in the second quarter. After being limited to less than 10 yards in the game's first 15 minutes, Nevada chewed up 46 yards during its first two drives of the second to take the lead for good. Strong, a projected top-10 pick in April's NFL Draft, capped a three-play, 50-yard drive with a 16-yard touchdown toss to Toa Taua. The score gave Nevada a 10-7 advantage with 12:34 to go in the game's opening half. In the end, Strong completed 25-of-32 passes for 377 yards and six scores. The Aggie interception was only the QB's third of the season.

In all, the Wolfpack scored touchdowns on four of their five drives in the second quarter, as Nevada racked up 265 yards in the second quarter. All four of the hosts' scoring drives were 50 yards of longer as Nevada opened up a commanding 31-7 lead at the half. After the Aggies' touchdown on their second drive of the game, NM State either punted or turned the ball over on each of its next 12 drives.

The Wolfpack continue to pour it on in the third quarter, embarking on touchdown drives of 75 and 79 yards. Nevada increased its lead to 52-7 when Berdale Robins took the ball away from Wyatt who had taken in a five-yard reception from Johnson at the Aggies' 25 yards line. Robins ran the ball back for a 25-yard touchdown.

The Aggies continued to battle in the fourth quarter, as Johnson led three different fourth-quarter touchdown drives. The first was a seven-play, 91-yard series that ended with an 18-yard Terrell Warner touchdown catch with 13:57 to play.

After the Aggies forced a Nevada punt, Johnson capped a quick four-play, 75-yard drive with a 34 yarder to PJ Johnson. The score cut the Nevada lead to 52-21 with 9:33 to play.

Nevada added one last field goal (42 yards) with 3:17 to play to take a 55-21 lead before Johnson capped one last touchdown drive with a one-yard score that brought the Aggies to 55-28.

COACH SPEAK (HC DOUG MARTIN):
"There's no quit in our guys, especially offensively. We finished the game well, but overall we didn't play well enough upfront on offense in the first half to give Jonah a chance. We really just played poorly in pass protection and run blocking. Defensively we were outmatched. But again our guys are playing hard. We certainly have to look at various personnel issues. The right side of our offensive line has been a continual problem. We're a little young at that one guard spot, but we'll look at it in the open week. I thought some of our young guys did step up. Ron Vann played really well for us too which was good to see. Jonah played really well for us. He threw for over 400 yards and three touchdowns and then added one on the ground. And he was running for his life at times. It's hard to play quarterback when you're getting hit like that. Everything starts to look like pressure when your offensive line is struggling. For the duress, he was under I thought he played pretty well."

On the impending open week:
"Our guys need some time and we're going to take some days off to let them heal up, emotionally and physically. And then probably Thursday or Friday we'll start to put some plans in place for practice and Hawai'i, but we'll give our guys some time to regroup."

UP NEXT:
Following their first of two bye weeks, NM State makes the lengthy trip to Hawaii to complete a rare home-and-home series with the Rainbow Warriors. The second showdown between NM State and Hawaii in 2021 is set to begin at 10:00 p.m. MT two weeks from tonight (Oct. 23).