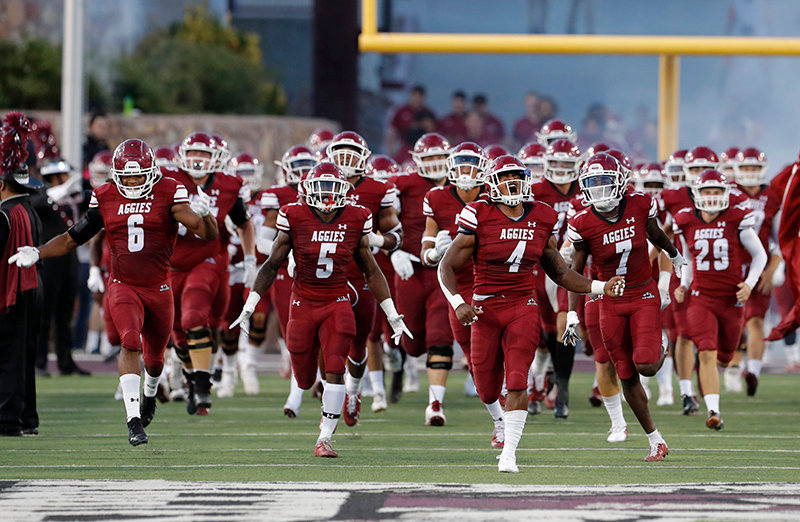 The NM State Aggies hit the road for the first time in 2021, traveling to Southern California for an 8:30 p.m. (MT) matchup with the San Diego State Aztecs at Dignity Health Sports Park on CBS Sports Network.

COACH SPEAK (HC DOUG MARTIN):
"We play a much better team this week. San Diego State is one of the best teams in the Mountain West and a tremendous defensive team. They're well coached and have great athletes. They have all the resources in the world. It's tough to compete against teams like that. So that's the challenge this week. We'll go play them and see what we can do."

COMING UP THE MOUNTAIN:
Saturday's contest at San Diego State is the first of seven contests the Aggies will play against the Mountain West this season. Following the game at San Diego St, NM State will make the short trip to New Mexico (Sept. 11). The 2021 schedule also features a home-and-home with Hawaii (Sept. 25, Oct. 23), road contests at San Jose State (Oct. 2) and Nevada (Oct. 9) as well as a home game with Utah State (Nov. 6).

STATE OF THE UNION:
Sophomore corner Torren Union earned his first-career start Saturday night against UTEP. The nephew of movie star Gabrielle Union and former NBA superstar Dwyane Wade, Union transferred to the Aggies from South Dakota State. On Saturday, the Arizona native had six tackles and a pass breakup. His six tackles were the fourth most on the Aggies on Saturday.

'TON OF PRODUCTION:
Sophomore Dalton Bowels is adjusting to his new position (safety) just fine. The former New Mexico Military Institute graduate made his first career Aggie appearance and start on Saturday. Bowels had seven tackles and an interception that looked to set up an Aggie touchdown. On the next play following his interception, Jonah Johnson found Isaiah Garcia-Castaneda for what looked to be a 66-yard TD, but the play was called back due to an ineligible player downfield call.

GO D.J. THATS MY DJ!
Corner DJ McCullough also forced a turnover for the Aggies. The corner back picked off a pass in the fourth quarter on Saturday and returned the ball to the UTEP nine yardline.

LAST GAME (UTEP):
• Running back O'Maury Samuels made his Aggie debut on Saturday. The former Las Lunas star had 28 yards rushing and added 20 through the air. The running back did not have a play that went for negative yards and and caught both of his targets.
• Linebackers Trevor Brohard and Josh Ferguson each tied or set a new career-best on Saturday. Brohard recorded 11 tackles which tied his career-best (Tarleton; 2/21/21), while Ferguson recorded a pair of tackles for loss which set a new career best. The duo were the top two tacklers for the Aggies on Saturday.
• On the special team's side of things, former Dixie State transfer Josh Carlson had yet another strong game. The Arizona native set a new career-best for his longest punt when he booted a 57-yarder. The punter also had a 62-yard punt that was downed inside the five called back due to an illegal formation penalty.
• The Aggies won the turnover battle on Saturday night, recording a pair of interceptions. The Aggies turned the ball over just once, a Jonah Johnson first quarter fumble.

BEHIND ENEMY LINES (SDSU):
• The Aztecs enter the Week One match up with the Aggies looking to extend an 11-game non-conference winning streak that span nearly six seasons.
• SDSU's last non-conference home loss was to South Alabama. The Aztecs fell 34-27 in overtime to USA back on Sept. 19.
• The Aztecs return 10 of the 15 players who were named to one of three All-Mountain West players including Cameron Thomas and Caden McDonald. McDonald was named to the Bendarik Award Watch List, while Thomas was also named to the same list.
• McDonald recorded 10.0 tackles for loss in 2020 and had 4.5 sacks. Thomas added 9.5 tackles for loss and 4.0 sacks.
• On the offense side of the ball projected SDSU QB Jordon Brookshire returns after seeing action in three games last season.
• Brookshire completed 42-of-74 passes for 410 yards and a pair of touchdowns. The Aztecs lost 2020 starter Carson Baker to Western Kentucky.
• Baker played six of SDSU's eight contests, completing 59-of-104 for three touchdowns and interceptions.
• San Diego native Jesse Matthews was the Aztecs leading receiver in 2020, hauling in 24 passes for 326 yards and a touchdown.
• Also back in 2021 is tight end Daniel Bellinger, who hauled in the second-most passes on the SDSU team (21) for 203 yards.
• SDSU also returns running back Greg Bell, who was high school teammates with current NM State WR Ron Vann.
• A transfer from Nebraska, Bell ran for 637 yards (91.0/game) in 2020 and had six touchdowns. The back also added 11 receptions for 114 yards and a score.
• In his second stint with the Aztecs, Brady Hoke looks to lead his SDSU squad to a Mountain West title. The Aztecs were picked to finish third in the ultra-competitive Mountain West Western Division behind future NM State opponents San Jose State and Nevada.

UP NEXT:
The Aggies close a two-game road swing next Saturday when they make the short trip up I-25 to Albuquerque to face the Lobos of New Mexico. Kick-off for the Battle of I-25 is set for 5 p.m. on Stadium.

Cinderella's slipper gets left behind