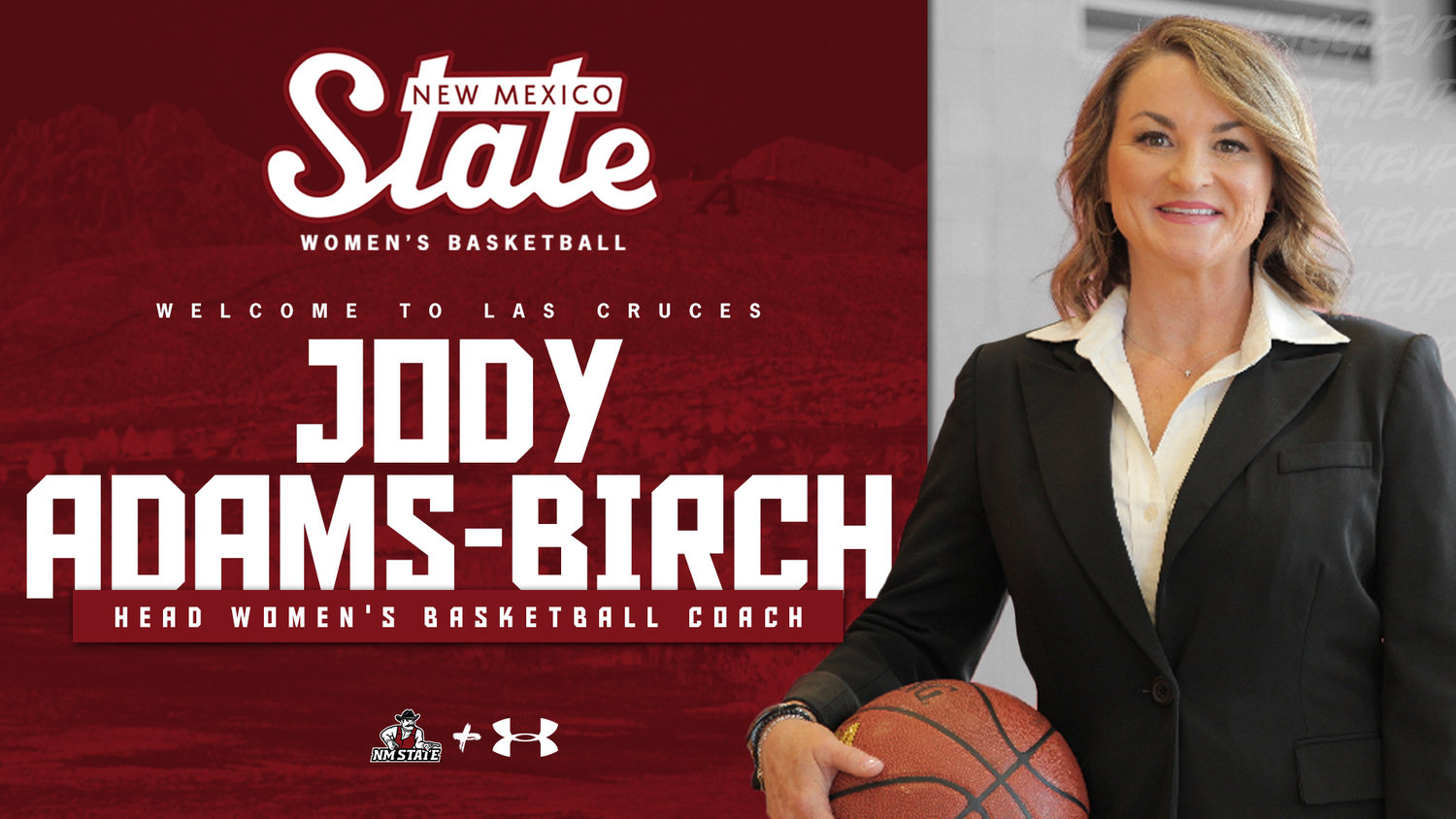 LAS CRUCES, N.M. – Jody Adams-Birch will be taking over as the next leader of the NM State women's basketball program.

"Having known Jody for over 15 years I couldn't be more thrilled that she will be the new head coach of our women's program," said Moccia. "Jody has an impeccable pedigree in college basketball from her playing days and a tremendous winning record wherever she goes."

Adams-Birch brings with her 27 years of coaching experience which includes six NCAA Tournament appearances at three different schools and 185 wins as a Division I head coach. She was also the starting point guard on the Tennessee Lady Vols' 1991 National Champion squad during her time as a player – learning under the late, great Pat Summitt.​

"I am so excited and grateful to be the next leader of the New Mexico St women's basketball program. To be wanted, needed and surrounded by people of excellence is a dream come true for me," Adams-Birch said.

Adams-Birch carries a tradition of excellence everywhere she goes – helping lead seven different teams to conference championships as a head coach while reaching the postseason eight times in 10 seasons. She also signed a total of five top-40 recruiting classes during her years with The University of Missouri-Kansas City and Wichita State in addition to helping sign a top-five recruiting class at Minnesota that eventually reached the Final Four in their senior season.

"I know I was not the author of this plan but so very grateful to be at my dream job here at New Mexico State," Adams-Birch added. "I would like to thank Chancellor Arvizu & Athletic Director Mario Moccia for entrusting me with this incredible opportunity to empower young women of our future and help guide them through the culture we will build of winning ways.

"My heart is wrapped around us becoming family, owning the moment & the passion for growth. With this heart-driven mindset I know, this is a great start in winning the Aggie way – in the classroom, on the court and in our community. I can truly say on this day my heart is filled with joy to be an Aggie and for Las Cruces to be called our home."

She will inherit a women's basketball program with an impressive amount of recent success as the Aggies have claimed the WAC regular-season title in five of the last eight seasons. NM State has also earned four NCAA Tournament bids and four WAC Tournament titles since 2015.

"I have seen her up close at Southern Illinois and Wichita State and I know she will bring an incredible hunger to win, and I can't wait for her to start her tenure in Las Cruces," Moccia added.

Her time at Wichita State also happened to overlap with a pair of coaches that Aggie basketball fans are familiar with as both Chris Jans and Greg Heiar were assistant coaches on the Shockers' men's staff during her stretch in Wichita, Kan.

"The connection Jody had in Wichita with both our current and former head men's basketball coaches was exceptionally strong," Moccia continued. "Chris Jans and Greg Heiar could not say enough about how good of a coach they feel she is."


Southern Illinois | 2018-20 (Assistant Coach), 2020-22 (Associate Head Coach)
Adams-Birch spent her most recent four years on staff at Southern Illinois where she served as an assistant coach for two years until being named the associate head coach ahead of the 2020-21 season. Just last season, she helped lead the Salukis to their first regular-season MVC title since the 2006-07 season as SIU finished the regular season with a 20-8 overall record and a 15-3 record in league play.

While at Southern Illinois she coached four First Team All-MVC honorees, including Abby Brockmeyer who was named the 2022 Jackie Stiles MVC Player of the Year.

In 2019-20, she assisted in leading the Salukis to their sixth straight winning record, including knocking off a ranked opponent (Missouri State) for the first time since 1991.

Derby High School | 2017-18 | Assistant Coach
Prior to her addition to the Southern Illinois staff, Adams-Birch made a stop in Derby, Kansas, where she was the assistant coach at Derby High School in 2017-18. While there, she helped lead the Panthers to their first state title in program history as they finished the season with a 23-1 record and won the Kansas 6A State title.

Wichita State | 2008-17
In her time as a head coach at Wichita State, she completed a total transformation of the program to help lead WSU to unprecedented success in her nine seasons as the bench boss. When Adams-Birch arrived, the Shockers had won 20-plus games only once in program history and had never made an NCAA appearance, won a MVC title or MVC Tournament title.

Wichita State had an incredible run of success under Adams-Birch, as the Shockers posted four-straight 20-plus win seasons and made six-straight postseason appearances from 2009-15, which included three-straight MVC regular season and tournament titles from 2013-15, resulting in a trio of NCAA Tournament appearances. While at Wichita State, Adams-Birch was also twice named Missouri Valley Coach of the Year, earning the accolade in 2013 and 2015.​

Murray State | 2007-08
Prior to taking over the reins at Wichita State, Adams-Birch spent one season as the head coach of the Murray State Racers. The Racers went 24-8 under Adams-Birch on their way to securing the program's first-ever NCAA Tournament berth.

Kansas City | 2000-04 | Associate Head Coach
Prior to her initial stint at SIU, Adams-Birch was the associate head coach at UMKC under Eikenberg from 2000-04 and was named a 2003 AFLAC National Assistant Coach of the Year after she helped UMKC sign some of the best talents in the Kansas City area. Among those recruits was Carlai Moore, who was named to the Mid-Continent Conference All-Freshman team and earned the league's Sixth Woman-of-the-Year Award. Moore eventually followed Adams-Birch and Eikenberg to SIU, where she won the 2006 MVC Newcomer of the Year award, and the following year, secured a spot on the All-MVC First Team.

Minnesota | 1997-00 | Assistant Coach
From 1997-00, Adams-Birch served as an assistant coach at the University of Minnesota. She was the Gophers' recruiting coordinator and helped Minnesota sign a top-5 national recruiting class prior to the 2000-01 campaign. This class included current Minnesota head coach, WNBA Champion and Olympic gold medalist Lindsay Whalen.

Wake Forest | 1996-97 | Assistant Coach
Before coaching at Minnesota, Adams-Birch worked as an assistant coach at Wake Forest for one season. While there, she helped lead the Demon Deacons to the second round of the ACC Tournament in 1996-97.

Auburn | 1994-96 | Assistant Coach
Prior to her time at Wake Forest, Adams-Birch was an assistant on Joe Ciampi's staff at Auburn for two seasons. Adams-Birch was on the Tiger bench for a pair of NCAA Tournament runs, including a trip to the Elite Eight in 1996.

Tennessee | 1990-93 | Student-Athlete
A 1994 graduate of Tennessee, Adams-Birch played four seasons for the Lady Vols under legendary head coach Pat Summitt and was the starting point guard for three Southeastern Conference Championship teams. The Lady Vols advanced to the NCAA Tournament in each of her four years and captured the NCAA's ultimate prize with a national championship in 1991. She began her coaching career as a student assistant with the Lady Vols in 1993.​

Personal Life
A native of Cleveland, Tenn., Adams-Birch received her B.S. in human performance from Tennessee in 1994. She also has two stepchildren in Jordan Birch, 24, and Rylea Birch, 20. She is married to her husband Roy and has two dogs that are like family – Ace, a boxer, and Della Rose, an American bulldog.

Adams-Birch will be formally introduced to the Las Cruces and NM State communities at her introductory press conference on Friday, April 1, at 10 a.m. in the Barbara Hubbard Room located in the Pan American Center. The event will be open to the public.

For complete coverage of NM State women's basketball as the Aggies enter their first year under Adam-Birch, visit NMStateSports.com – the official home of Aggie athletics – and follow the Aggies on Facebook (NM State Women's Basketball), Twitter (@NMStateWBB) and Instagram (@NMStateWBB).