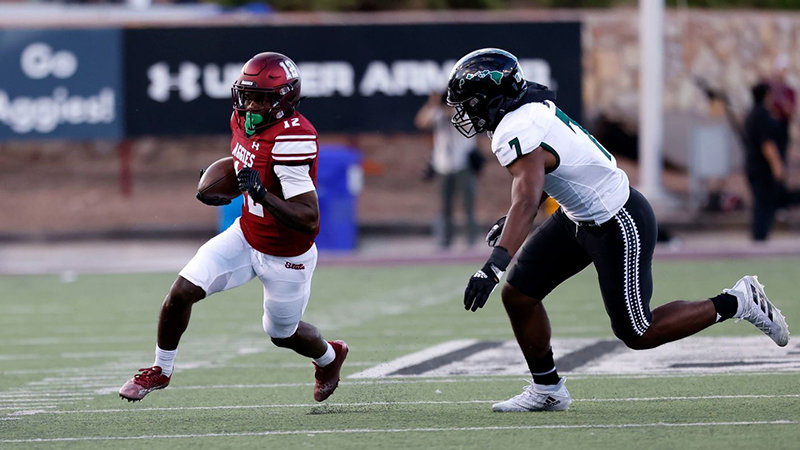 When the Aggie football team hosts Florida International University Saturday, Oct. 1, they’ll have a chance to win back-to-back home games for the first time since 2019.

New Mexico State University is 1-3 on the season, following its 45-26 home victory Sept. 24 against Hawaii. FIU was defeated 73-0 last week against Western Kentucky, dropping its record to 1-2. Kickoff for the Oct. 1 game is 6 p.m. at Aggie Memorial Stadium.

"The only way you're gonna win is if you go out there and have fun and I think our kids had fun ... I mean, the victory lap - There ain't nothing better than that," said NMSU Head Coach Jerry Kill after the Hawaii game, Kill’s first victory since taking the Aggie job.

The Aggies beat Hawaii with a powerful running game, churning out 357 yards on the ground.

Running back Star Thomas, a sophomore from Homer, Louisiana, led all rushers with 144 yards, including a 27-yard touchdown for the Aggies’ first score. Quarterback Gavin Frakes, a true freshman from Norman, Oklahoma, carried the ball for 78 yards and a touchdown. And sophomore running back Jamoni Jones from Tulsa, Oklahoma, ran for 59 yards and two touchdowns.

"I feel like the whole team was [really] looking forward to this, our first win, especially new coaching staff, a rebuilding year," Ojoh said. "It's usually hard the first year for any program to get things rolling, but we [were] definitely looking for this first win and just get the ball rolling now. It's not only just to win once, but to keep doing it week-in and week-out and just keep going back-to-back at a steady basis."

The Aggies will have an off week Oct. 8 before hosting rival University of New Mexico Saturday, Oct. 15, for NMSU’s Hispanic Heritage Day game.