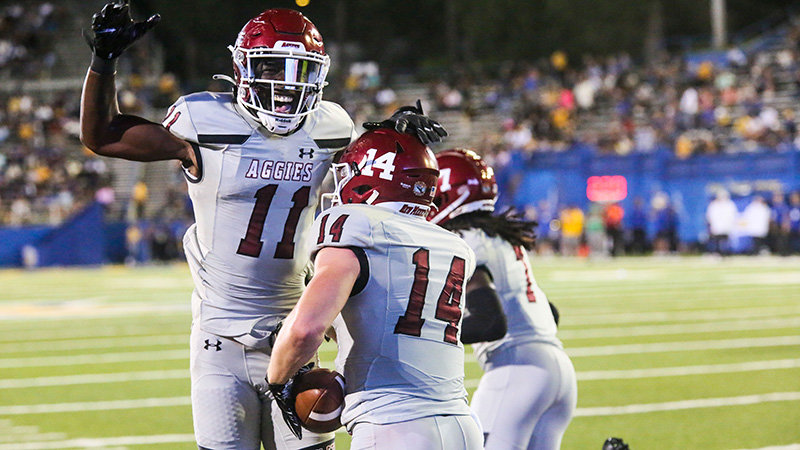 Sophomore Isaiah Garcia-Castaneda continued his strong play as of late, catching six balls for 90 yards and a pair of scores. The WR is the first Aggie WR since Izaiah Lottie had two touchdown catches against Troy back on Sept. 17, 2017. Californian Cole Harrity caught Johnson's other touchdown pass in the second quarter. The touchdown was the first of his career.

Defensively Nick Giacolone had the best game of his Aggie career. The Floridian had 11 total tackles which is a new career-high and recovered a third-quarter fumble.

HOW IT HAPPENED:
San Jose State won the toss and chose to differ, meaning for the fifth time in six weeks the Aggies started on offense.

On the opening drive, Johnson connected with Jared Wyatt on the opening play of the game, before the drive ended in a 45-yard punt from Josh Carlson.

After the defense forced a three-and-out, Johnsons pushed the ball to the NM State 42, before the drive ended in another punt.

On the ensuing SJSU drive, fill-in QB Nish Nash led his team on an 11-play, 76-yard drive that culminated in a three-yard Tyler Nevens rushing touchdown. Nevens finished with 27 carries for 115 yards and the touchdown, while Nash finished 15-of-18 for 193 yards and three touchdowns.

On second and eight, Johnson connected with Garcia-Castaneda down the right sideline for a 55-yard pass that advanced to the ball to the San Jose State 18 at the expiration of the first quarter.

Five plays later, on second and goal, Johnson scrambled to his right to evade the pressure and shoveled a pass towards Garcia-Castaneda who caught the ball for his third receiving of the season. The touchdown tied the contest at seven with 12:19 to go in the first half.

San Jose State responded on its next drive, using a 15-yard scamper from Nash and a 25-yard connection between the fill-in QB and TE Derrick Deese to march the ball to the NM State 25.

After a rush play for no gain, Nash hit Malikhi Miller for a 25-yard touchdown that gave the home side a 14-7 advantage with 10:01 left in the second.

The Aggies started their next drive with good field position after Juwaun Price returned the kickoff to the 30. On the first play of the drive, Johnson hit Andre Bodison for a 12-yard pass that sparked an 11-play, 70-yard drive. Johnson finished the second scoring drive of the night 6-for-7 after finding a wide-open Cole Harrity in the back of the endzone. The connection tied the score at 14 with 4:33 to play.

Taking over at his own 36 after a strong kick return, Nash handed the ball to Tyler Nevens on first down, and Neven ripped off a 36-yard rush that brought the Spartans to the Aggie 28.After a personal foul backed SJSU to a first and 20 situation, Nash connected with Deese Jr for a 19-yard pass that set a second down and one. Following a rush for no gain, Devin Bell brough down Tyler Nevens for a two-yard loss on third and one that forced a 35-yard Matt Mercurio field goal.

The three points gave San Jose State a 17-14 advantage with 69 seconds to play. Taking over at his own 25, Johnson made his lone mistake of the night when he forced a pass that was intercepted by

Nehemiah Shelton at the NM State 25 and was returned to the 12. 10 seconds later Nash hit Deese Jr for a touchdown that gave the Spartans a 24-14 advantage.

Johnson used 10-yard connection Jared Wyatt and an 18-yarder to Garcia-Castaneda to march the ball into SJSU territory, but the QB couldn't not put points on the board before the first half clock expired.

After the Aggies and Spartans traded punts to open the second half, Giacolone and the Aggie defense forced the lone turnover of the night on the second SJSU drive, when DJ McCullough forced a Shamar Garrett fumble at the SJSU 25.

The Aggies cashed in on the turnover when Price ran the ball in from the two for the Aggies third touchdown of the night. The score cut the SJSU lead to 24-21 with 6:16 to play in the third.

Like they did all night, the Spartans answered the Aggie scoring drive, authoring a six-play, 85-yard drive that ended with a Garrett touchdown run. On the point-after attempt, defensive lineman Lama Lavea was able to block the attempt to keep the Aggies within striking distance at 30-21 with 3:58 left in the third.

Johnson and the Aggies used four third down conversions to string together a 13-play, 80-yard drive that brought NM State to within 30-28 with 12:05 to play. The drive finished with a six-yard pitch-and-catch from Johnson to Garcia-Castaneda.

SJSU used one last 11-play, six-minute drive to go up 37-28 with just under six minutes to play.

Johnson led another lengthy 11-play drive to try and draw to within one score, on the ensuing NM State possession, but a key third down and three stop from the SJSU defense limited the Aggies to an Ethan Albertson 25-yard field goal that brought the Aggies to within 37-31 with 1:48 to play.

Needing passion back and with the clock dwindling, Doug Martin and the Aggies attempted an onside kick that bounced high off the turf and into a Spartan's hand.

With just two timeouts left, the Aggies desperately tried to regain possession, but SJSU was able to run for one more first down that sealed the victory.

COACH SPEAK (HC DOUG MARTIN):
"I was really proud of the effort our guys played with tonight. We battled back from multiple deficits and cut it to a two-point game in the fourth quarter. I thought Jonah [Johnson] played remarkably well. He threw for 300 yards, three touchdowns and had just the one turnover. We played our best offensive game of the season against one of the top defenses in the Mountain West. Our guys played with a lot of character and heart tonight. Nobody can question this team's effort. We'll keep battling. I told our guys in the locker room that they have no reason to hang their heads at all, and every reason to be proud of the effort they gave. We just came up a little short against a really good team."

On the WR Core:
"Isaiah has been really consistent all year long. And our other receivers continue to step up. Robert Downs III played really well tonight. Jared Wyatt played really well and Cole Harrity made some plays tonight. It was really a team effort, especially on offense. To put up the kind of production against that team was something. There aren't a lot of teams in the Mountain West that can do what we did tonight."

QB Jonah Johnson:
"I feel like we performed well as an offense tonight. We had everything working, and pretty much everything we called, for the most part, resulted in positive yards. Other than a few plays we executed whatever we called well. My job as the QB is to get the ball into my playmaker's hands. Once I do that, we can make plays. You saw that tonight. That's my part. I was trying to not do too much, get the ball into their hands, and let them make plays. That's how we were able to stay in the game. We need to continue to get better and improve each week. The first half of the season is done now, and we need to attack the second half of the season and get one percent better each day and week."

UP NEXT:
The Aggie's return to action next Saturday when they head to Reno for a matchup against Nevada. Kick-off from Mackay Stadium is set for 8:30 p.m. (MT) on CBS Sports Network.