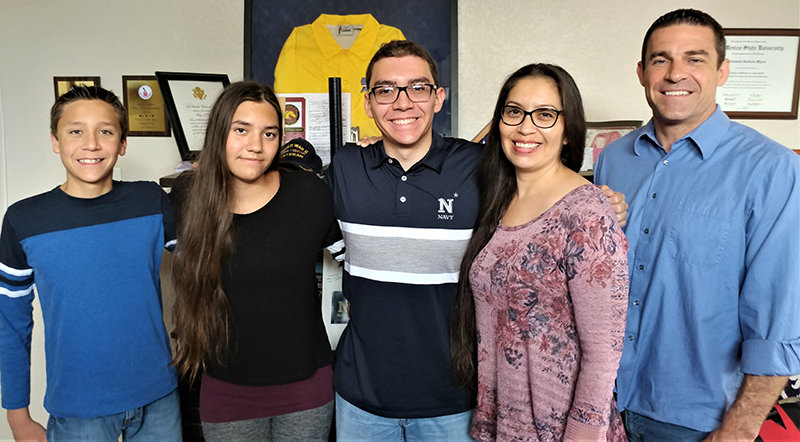 Elijah Myers is continuing his family’s proud heritage of service.

Both Elijah’s grandfathers served in World War II – one was a tank driver, the other a paratrooper. His dad, Ben, is a longtime Las Cruces firefighter. His mother, Sandra, has been a home-school teacher to Elijah and his younger siblings. And on June 29, Elijah became a midshipman at the U.S. Naval Academy (USNA) in Annapolis, Maryland.

Elijah got a personal phone call from U.S. Rep. Yvette Herrell, R-N.M., telling him he had been accepted to the Naval Academy, after receiving nominations from U.S. Sens. Martin Heinrich and Tom Udall, and then U.S. Rep. Xochitl Torres Small, all D-N.M.

“I wanted to serve my country,” said Elijah, a 2021 graduate of Arrowhead Park Early College High School (APECHS). “The best place I could do that is in the Navy.”

Elijah, 18, has already done a lot to serve his community and Las Cruces Public Schools.

As a member of the LCPS Student Advisory Council, Elijah visited the New Mexico Legislature to lobby on behalf of three education bills. He advised Families and Youth, Inc. on alcohol and drug abuse, and wrote a newspaper column about the dangers of marijuana use by children. For the Children, Youth and Families Department’s local Juvenile Justice Advisory Committee, Elijah did research and provided student opinions on issues in presentations across the city. He wrote, directed, edited and acted in a video for the Unified Prevention (UP!) Coalition of Las Cruces about helping parents talk to their children and served as a member of the Success Partnership Leader’s Circle.

Elijah was a state champion swimmer in multiple events, 2017-20, and was 2018-21 team captain of the Wild West Aquatic Club of Las Cruces. He also was a member of the National Honor Society and performed more than 60 hours of community service. He also plays the guitar and writes songs.

“He’s a total overachiever, but in a good way,” said Elijah’s dad, Ben Myers, who has been with the Las Cruces Fire Department for almost 15 years and is an LCFD training officer.

Elijah graduated from APECHS with a 4.3 GPA, never earning a grade lower than an A in any class, and was the salutatorian of his class. He also earned a two-year associate of science degree from Doña Ana Community College (DACC) and was on the DACC dean’s list 2018-21.

“Elijah is an impressive young man and I have really enjoyed getting to work with him these past couple years,” said Mike Kingery. Elijah was in Kingery’s dual-credit precalculus, differential calculus and integral calculus classes at APECHS.

“Through my 25-year teaching career, Elijah has definitely been one of my favorites as he always has a very positive and inviting personality, he is very respectful and is a tremendous student,” Kingery said in his letter recommending Elijah for the Naval Academy.

At USNA, Elijah plans to study mathematics and try out for the academy swim team. During his five-year commitment to the Navy following graduation, Elijah hopes to become a Navy SEAL.

“My next nine years are planned,” Elijah said. “I want to try to shoot for the stars.”

“I’m proud of him,” Elijah’s brother, Daniel, said about his Elijah’s USNA acceptance. “I’m going to miss him.” Daniel, a home-schooled seventh grader, is interested in game design and computer programming.

“I think it’s pretty cool,” said sister Naomi, who made straight A’s during her first year at APECHS.

All three kids swim together, were home-schooled together, including during Covid-19, and even made home movies together.

Sandra said she and Ben’s message to all their children has always been: “Whatever you want to do, we’ll help you get there.”

“It’s going to be sad,” said Sandra, about the family dropping Elijah off for his flight to Annapolis.

That moment will be “so bittersweet,” Ben said. “We’re so proud him – the man he’s becoming. He’s just such a uniquely driven kid.”