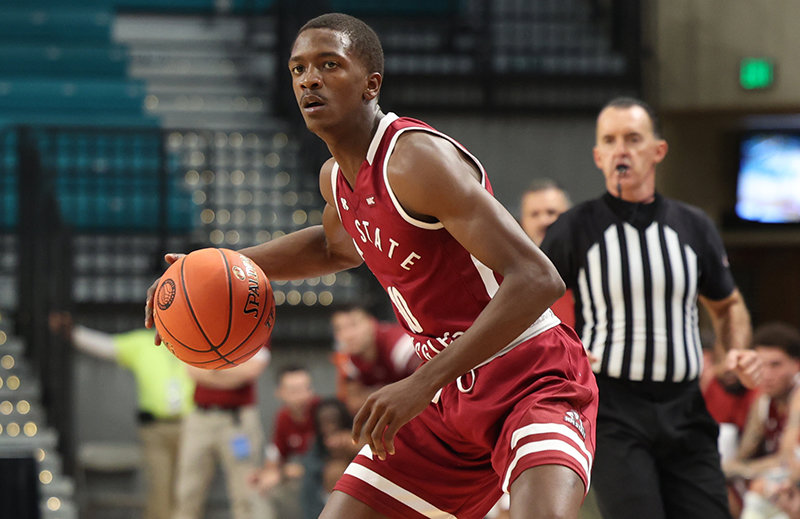 THE OPENING TIP
• Back in the Land of Enchantment following its first road trip of the season, the NM State men's basketball team hosts NCAA Division II adversary New Mexico Highlands Wednesday evening inside the Pan American Center. Tip-off is set for 6:00 p.m.
• ESPN+ and the ESPN app are the only ways to watch the 15th all-time meeting between the two programs. Adam Young will serve as the play-by-play voice for the Aggies while former NM State player Joe Garza will make his debut as an analyst. From 2016-18, Garza, a Las Cruces, N.M., product, suited up for the Aggies.
• Over the airwaves, legendary radio play-by-play man Jack Nixon will be stationed courtside to narrate the action.
• Nixon's call can be heard on 99.5 Zia Country FM in Las Cruces, N.M., and nationwide on The Varsity Network app.
• Affiliate stations of the Aggie Sports Network can be tuned in to in Artesia, N.M. (990 AM), Carlsbad, N.M. (1240 AM), Gallup, N.M. (94.9 FM), Alamogordo, N.M. (103.7 FM) and El Paso, Texas (1380 AM). All of those stations will also carry Nixon's commentary of Sunday night's tilt.
• The first 1,000 fans in attendance for Wednesday's game will get their hands on a limited edition Pistol Pete's 1888 Ale hat. Pistol Pete's 1888 Ale is the officially-licensed beer of NM State and is available at over 300 locations around the state of New Mexico.

FAST BREAK POINTS
• For the third time in head coach Chris Jans' tenure in Las Cruces, NM State has won four of its first five games to start the season. A loss to Utah State in the Myrtle Beach Invitational semifinal round last Friday prevented the Aggies from starting a season with a 5-0 record for the first time since the 1990-91 season.
• NM State moved to 22-4 (.846) in games directly following a loss in the Jans coaching era with Sunday night's win over Indiana State in the Myrtle Beach Invitational third-place game.
• NM State improved to 9-4 (.692) in MTE games under the direction of Jans.
• Sunday night's win made NM State 6-4 (.600) in games played on the ESPN family of linear networks (ESPN, ESPN2 or ESPNU) in Chris Jans' tenure as head coach.
• After seeing his 64-game streak of getting at least one rebound snapped in the Aggies' loss to Utah State last Friday, Johnny McCants grabbed five in the Aggies' win over Indiana State Sunday night.
• Donnie Tillman's 23-point performance against Indiana State represented the highest point total by an Aggie since March 12, 2021. That day, Tillman went for 23 in a WAC Tournament semifinal triumph over Utah Valley.
• Teddy Allen is the only Aggie who has put in at least 10 points in each of his team's five games this season. He ranks ninth in the WAC in scoring at 14.8 points per game.
• Johnny McCants leads the WAC in both blocked shots per game (1.60) and total blocked shots (eight). That has helped NM State rise to the top of the WAC charts in blocked shots per game (4.0) as a team.
• NM State leads the WAC and ranks 45th among all NCAA Division I teams in three-pointers per game (9.8).
• In four of the Aggies' first five games of the season, four or more players have all scored in double-digits.

KEEP IT 100
• Wednesday evening's showdown represents the opportunity for two individuals associated with the NM State men's basketball program to arrive at some impressive career milestones.
• Fifth-year head coach Chris Jans will obtain his 100th victory as the Aggies' bench boss if NM State emerges as the victor Wednesday evening. Should he do so, Jans would become the sixth NM State head coach in program history to record 100 or more wins at the institution. Other names on that list include the legendary Lou Henson, the late Neil McCarthy, Marvin Menzies, Jerry Hines and Presley Askew.
• If Wednesday goes down as a win, Jans would be the fastest head coach in program history to reach the 100-win mark. Lou Henson reached the milestone after 127 games, but if Jans does it, it will be in his 126th game as NM State's head coach.
• Another individual going to his 100th win is senior Johnny McCants. Like Jans, McCants has 99 wins to his credit since he started his collegiate career in an NM State uniform.
• If McCants' secures his 100th victory, he'd be the first Aggie to enter the 100-win club since Eli Chuha did so in the 2018-19 season. Chuha racked up a program-record 110 wins through the course of his NM State career, and before Chuha, Ian Baker was the last NM State player to record 100 or more wins, doing so in the 2016-17 season.

THE POWER OF THE PAN AM
• NM State's return to the Pan American Center in 2021-22 means the Aggies will have the benefit of one of the best home court advantages on their side once again.
• Since the 2011-12 campaign, NM State has posted an incredible 135-13 (.912) mark inside the Pan Am Center. That home court winning percentage ranks as the fourth-best among all NCAA Division I college basketball programs in a similar span with only Gonzaga (.945), Kansas (.939) and Belmont (.919) possessing higher home court winning percentages than NM State.
• Under the direction of head coach Chris Jans, NM State's record inside the venerable facility sits at 45-3 (.938).
• NM State has won each of its last 13 games inside the Pan Am Center. The Aggies' average margin of victory through that 13-game winning streak sits at 18.8 points.
• The Aggies enter the 2021-22 campaign riding a 25-game winning streak over WAC opponents inside the Pan Am Center, too. Jans is the owner of a perfect 23-0 record against league opposition inside the Pan Am Center since he was installed as the Aggies' bench boss ahead of the 2017-18 season.

LAST TIME OUT vs. NEW MEXICO HIGHLANDS | Jan. 6, 2015
• A 37-37 deadlock at halftime was largely forgotten about as NM State outscored New Mexico Highlands 38-30 in the deciding frame to secure a 75-67 victory over its NCAA Division II adversary in the Aggies' second game of 2015.
• During the Aggies' third-consecutive win, three NM State players put in at least 14 points. Remi Barry led the way in the scoring column, dropping in a team-high 16 on 6-of-12 shooting. DK Eldridge added 15 on 5-of-11 shooting and finished one assist shy of a double-double. His nine helpers were one fewer than New Mexico Highlands generated as a team.
• Coming off the bench and enjoying a productive outing was Pascal Siakam who posted 14 points as well as six rebounds. Siakam's six boards were bettered only by Jalyn Pennie's eight for the Aggies who owned a 40-28 edge on the glass against their foes from Las Vegas, N.M.
• After seeing New Mexico Highlands convert 50-percent of its field goal chances in the opening half, NM State clamped down on defense. The Aggies limited the Cowboys to a shooting clip of 43.3-percent (13-of-30).
• The Aggies' accuracy from the field increased greatly in the second half, too, as they hit 60.9-percent (14-of-23) of their field goal tries to secure the win.
• Kendrick Nichols dropped in a game-high 24 poonts on 9-of-19 shooting for the upset-minded Cowboys.
• The win stretched NM State's winning streak over their in-state adversaries to nine games.
• Following their victory over New Mexico Highlands, the Aggies won 14 of their last 17 games of the season, claimed the WAC regular season title, won the 2015 WAC Tournament and made the cut for the 2015 NCAA Tournament.

LAST TIME OUT | NM State 80, Indiana State 66 | Sunday, Nov. 21, 2021
• Bouncing back in a big way following their first loss of the season, the Aggies turned to Donnie Tillman who poured in 23 points on 10-of-15 effort from the field to lead his team to an 80-66 triumph over Indiana State in the third-place game of the Myrtle Beach Invitational.
• Facing off against the Sycamores for the first time since 1983, NM State received double-digit scoring contributions from five individuals. Chipping in 12 points apiece were Teddy Allen and Will McNair Jr., while Johnny McCants and Jabari Rice added 10 apiece.
• McNair's effectiveness wasn't limited solely to scoring, though, as the Philadelphia, Pa., product corralled a game and career-high 15 rebounds. Those 15 rebounds were the most by an Aggie since Tillman soared for 17 in a road loss at CSUN (Dec. 28, 2020). The big man also dished out a career-high five of NM State's season-high 19 assists.
• Ball movement was key for the Aggies who assisted on all but 13 of their 32 field goal makes. The result was a season-high field goal percentage of 53.3 (32-of-60). NM State's 19 assists represented a season-high and were the most since the Aggies dished out the exact same number in a WAC win at Tarleton (Feb. 26, 2021).
• For the second-straight game, NM State was perfect from the foul line, too. The Aggies went 5-of-5 from that distance and have made their last 11 shots from that distance.
• Rice added to his great showing in South Carolina by adding five rebounds and an equal number of assists. Through the Aggies' three-game stretch at the Myrtle Beach Invitational, Rice averaged 4.7 assists per game.
• Head coach Chris Jans moved to 2-1 as an NCAA Division I head coach against Missouri Valley Conference opponents in Sunday's win.

SCOUTING NEW MEXICO HIGHLANDS | ROSTER | SCHEDULE | STATISTICS
• One of the two exhibition games the Cowboys have on their schedule, the Cowboys' tilt with the Aggies won't go on their record, but that doesn't mean the NCAA Division II squad won't be gunning for a win.
• A roster laden with NCAA Division I transfers is what the Cowboys bring with them to Las Cruces and Ja'Vary Christmas leads the high-scoring crew from Las Vegas, N.M. Christmas' points per game average of 17.0 is tops on the team and he's putting up impressive shooting splits of .571/.529/.731 in four games this season.
• In addition to Christmas, Desmond Carpenter (16.8 ppg), Marcus Brown (16.3 ppg), Darius Harrison (11.5 ppg) and Sammy Barnes-Thompkins (11.0 ppg) are all averaging double figures for the Cowboys. With the exception of Barnes-Thompkins (formerly at Boston College), all are shooting at least 42.1-percent from the field, too.
• In their only other exhibition game of the season, the Cowboys dropped a 101-72 decision at New Mexico on Friday, Nov. 5. An exhibition bout for both clubs, Barnes-Thompkins pumped in a game-high 22 points on a 7-of-15 effort from the field. Brown added 13 points on 5-of-17 shooting.
• New Mexico Highlands was chosen to finish sixth in the 15-team Rocky Mountain Athletic Conference (RMAC) when the league unveiled its preseason poll back on Oct. 27, 2021.

COMING UP NEXT
• A much more notable team from the Land of Enchantment makes its way into the Pan American Center to challenge NM State next. Tuesday, Nov. 30, at 7:00 p.m., age-old rivals clash once again when NM State tangles with New Mexico in the Battle of I-25. After putting their series on hiatus last season due to in-state COVID-19 restrictions, the teams will meet for the 225th time in the first of two 2021-22 clashes for in-state supremacy.