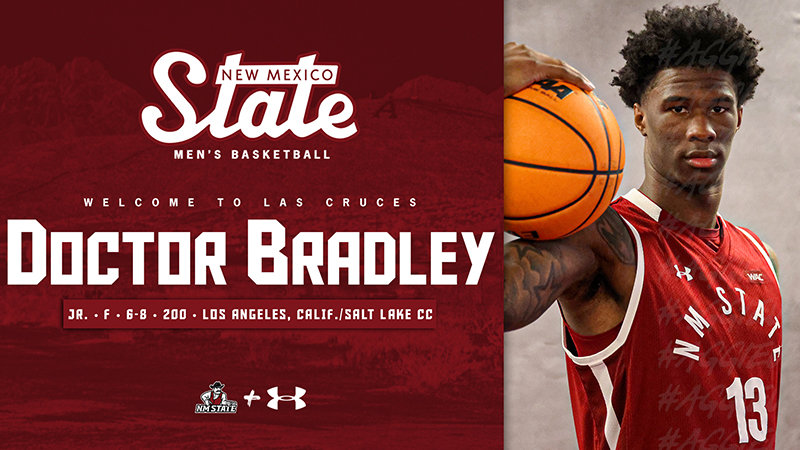 The Doctor is in.

Thursday morning, in an announcement made by NM State head men's basketball coach Greg Heiar, Doctor Bradley became the first signee of both the Aggies' 2022-23 class as well as the Heiar coaching era.

A junior college star through his sole season at Salt Lake Community College, the lanky, athletic forward caught Heiar's eye after he and the Bruins went toe-to-toe with the Aggies' bench boss in the NJCAA Division I National Championship game in mid-March of 2022.

Doctor Bradley | F | So. | 6-8 | 200 | Gardena, Calif./Junipero Serra HS/Cal State Fullerton/Salt Lake Community College | Stats (Salt Lake CC) | Stats (Cal State Fullerton) | Highlight Reel• Had the distinction of being one of the key cogs for the nation's top-ranked NJCAA Division I basketball program through the 2021-22 campaign at Salt Lake Community College.• Took part in all 37 of the Bruins' contests last season and made 17 appearances in the starting lineup. Through those tilts, averaged 13.0 points, 4.2 rebounds, 1.8 assists and 1.5 steals in 20.7 minutes per game.• Finished the season with 26 outings of 10 or more points and six games with 20 or more markers.• Earned a spot on the NJCAA Region 18 All-Tournament Team after helping the top-seeded Bruins to a regional crown.• Helped lead his squad to the NJCAA Division I National Championship bout against current NM State head coach Greg Heiar's Northwest Florida State squad.• Spent the two seasons prior to his time at Salt Lake Community College at Cal State Fullerton. Redshirted for the 2019-20 season before suiting up for 13 games on the Titans' 2020-21 schedule.• Averaged 5.3 points, 2.9 rebounds and 0.4 assists in 12.0 minutes per game through his lone season of on-court deployment with the Titans.• As a prep at Junipero Sierra High School, collected Second Team All-Conference honors during his junior season.

What they're saying about BradleyNM State head coach Greg Heiar | ""The Doc" is a tremendous basketball player and an even better person. His mixture of length, skill and athletic ability will be on full display in the Pan Am Center beginning next season. He brings a consistent work ethic, a passion to win and an electric, energetic personality to Aggie Nation. His versatility and intelligence will allow us to play him all over the court on both ends of the floor. Aggie fans going to love this impressive young man! #AggieUp."

For complete coverage of NM State men's basketball as the new-look Aggies gear up for the 2022-23 campaign, visit NMStateSports.com - the official home of Aggie athletics - and follow the Aggies on Facebook (NM State Men's Basketball), Twitter (@NMStateMBB) and Instagram (@NMStateMBB).