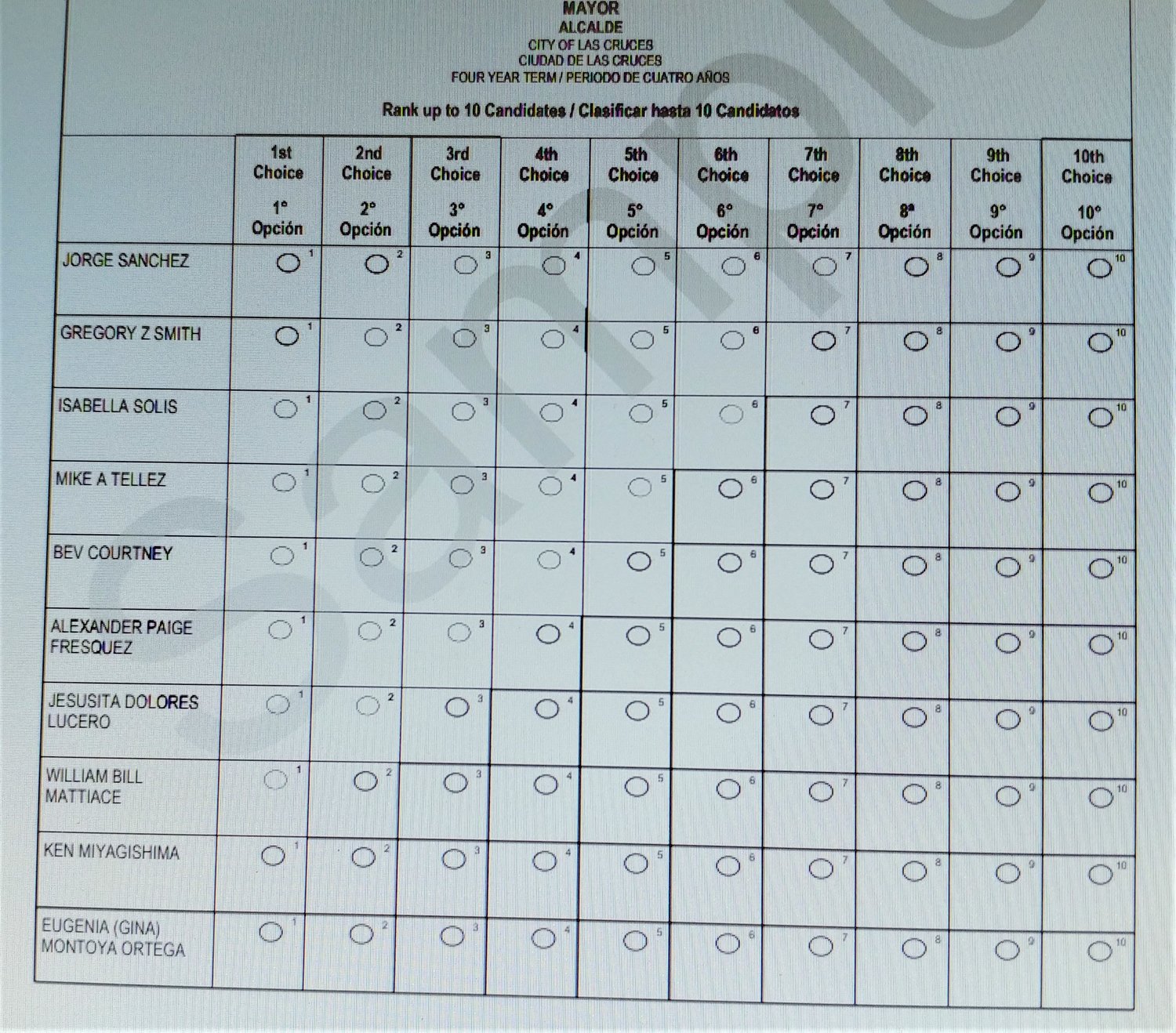 LAS CRUCES - Doña Ana County Clerk Amanda Lopez-Askin reminded Las Cruces residents that ranked-choice voting that will be in place in the mayor’s race and races for two seats on the city council will allow voters in the city to choose a mayor and city councilors and to participate in an instant runoff election at the same time.

For the first time ever, the City of Las Cruces will use a ranked-choice voting system in a city election. It will be in place in the 10-candidate mayor’s race and the races for two seats on the city council – District 2, which has four candidates, and District 4, which has three candidates. There will not be ranked-voice voting but a simple choice between two candidates in the races for the District 1 seat on the city council and for presiding municipal judge.

In the ranked-choice races, the candidate with the lowest number of votes is eliminated after the first round of voting. The votes on that candidate’s ballot for second, third and additional candidates are then redistributed to the other candidates in round two of voting and the process continues until one candidate in each race has 50 percent plus one vote and is declared the winner.

Ranked-choice voting likely will save the city and county $80,000-$100,000 because it eliminates the need for a run-off election, Lopez-Askin said at a news conference she held with Chief Deputy County Clerk Lindsey Bachman Oct. 7 at city hall to talk about ranked-choice voting.

At the news conference, Lopez-Askin said:

• Voters can vote at any alternate early voting locations Oct. 8-Nov. 2 and at any of the 40 locations that will be open on election day, Tuesday, Nov. 5.

• Any ranking of a candidate is a show of support for that candidate, no matter where he or she is ranked on the ballot.

• If a ballot is correctly filled out, voting machines will make a sound which Lopez-Asking called “the ring of democracy.” If there is an error such as a skipped ranking or an overvote (first-choice votes cast for two candidates, for example), the machine will make a different sound and indicate an error. The voter can then choose to get the ballot back and go through the “spoiled ballot” process with the presiding precinct judge at the voting location to get a new ballot or can opt to cast the ballot anyway.

The computer will start with the first eligible vote it finds on the ballot if there is a skipped ranking. It will not count an over-vote because there is no way to determine a voter’s actual choice.

“We’re excited about this election,” said Lopez-Askin. Her office is fully staffed for the election, she said, which likely will include 200-250 full- and part-time employees on election day, when there will be 40 voting locations open 7 a.m.-7 p.m. throughout the county.