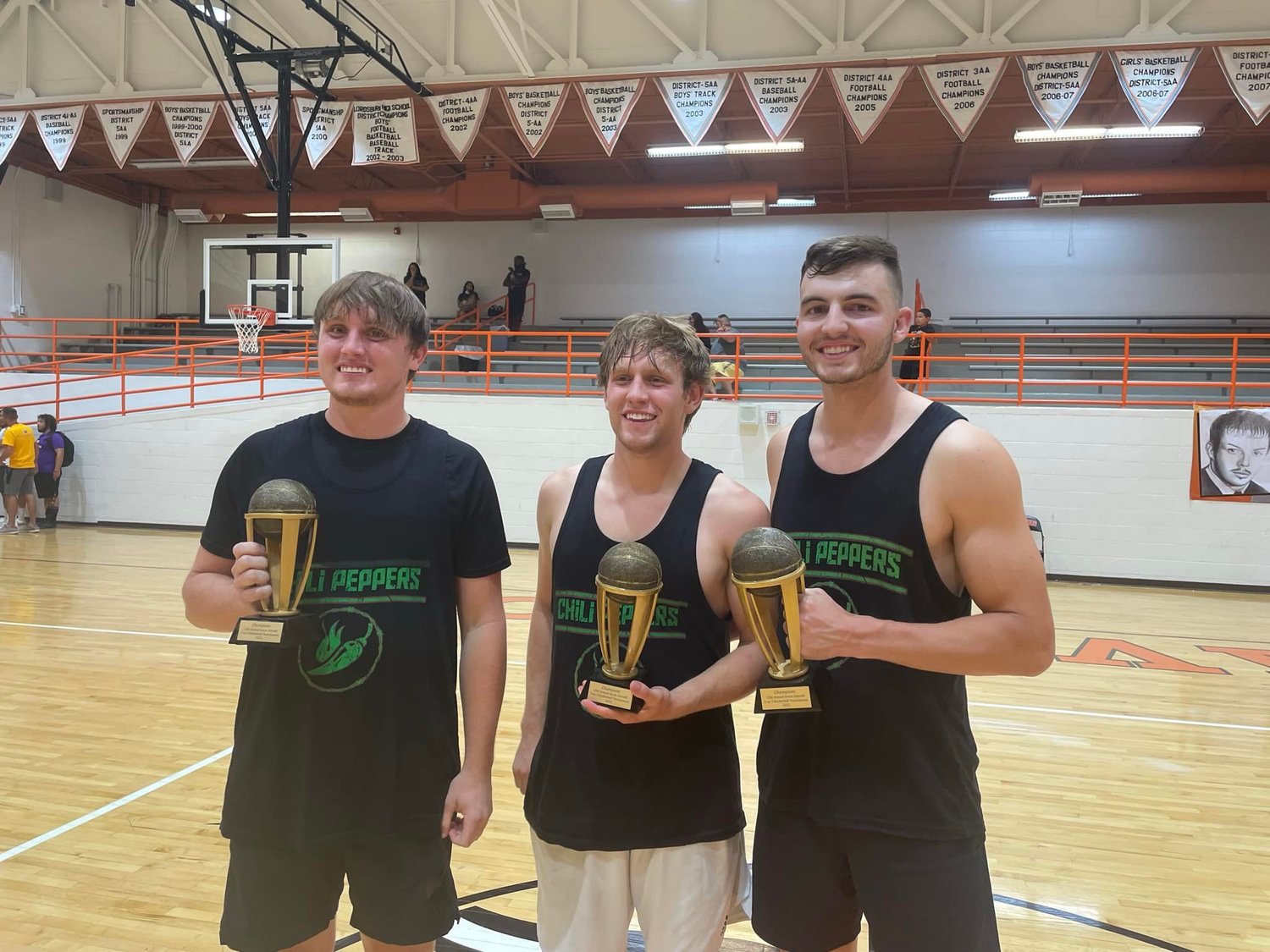 The Chili Peppers from Las Cruces took first place in the open division at the Lordsburg tournament.
COUrtesy photo 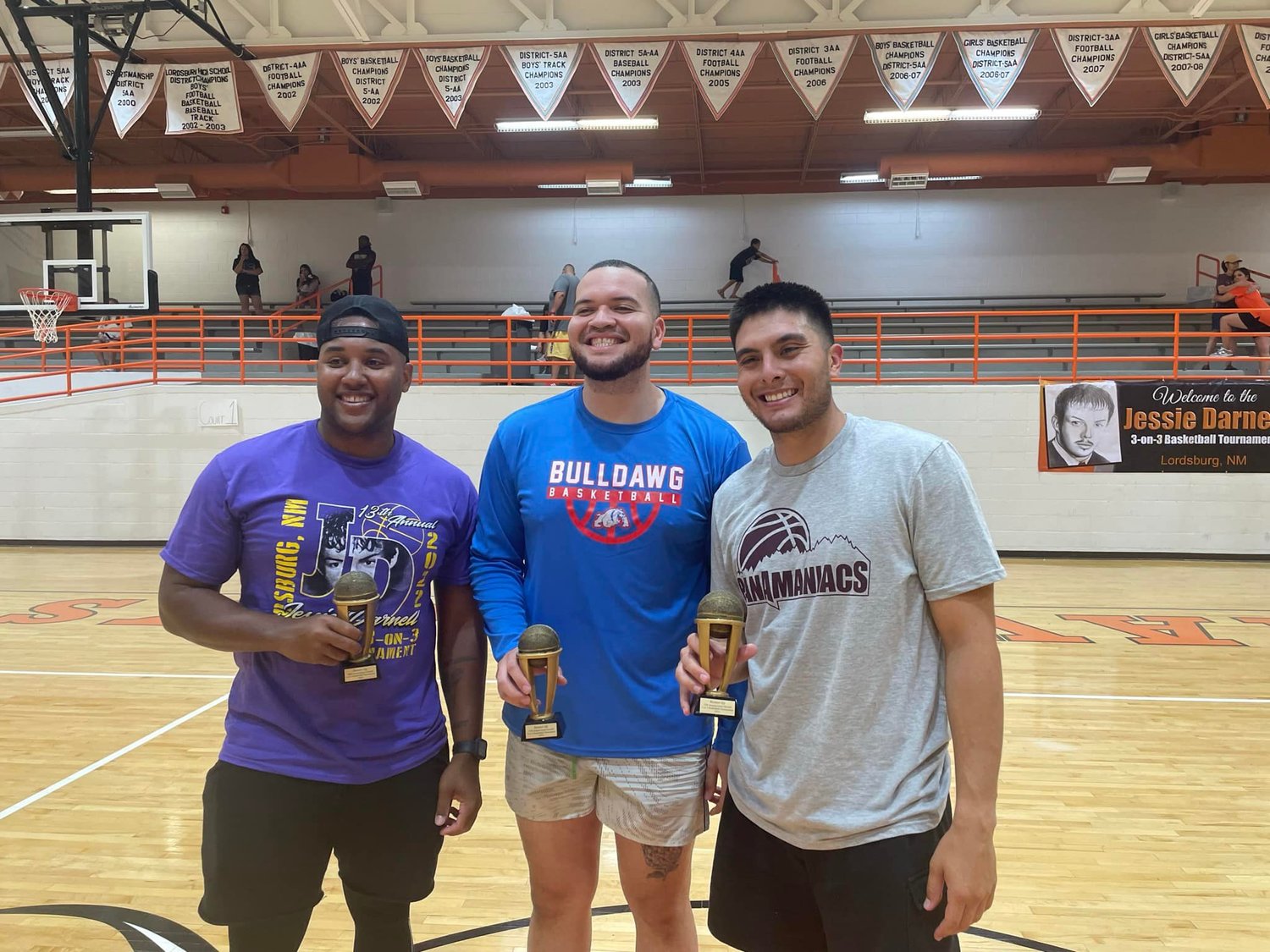 Working hard to bring awareness to Mental Health and Suicide, the community of Lordsburg hosted hundreds of visitors from far and near as the 13th Annual Jessie Darnell Memorial 3-on-3 Basketball Tournament and the Maverick Movement 5K Fun Run & Walk for Mental Health Awareness July 15-17.

There were 110 teams for the 3-on-3 fundraising basketball tournament from throughout New Mexico and Arizona. The age divisions go from 10-and-under to the open men’s which is 17-and-up.  This was the first year there was an “old division” for those 35-and-up.

“It is always encouraging and refreshing to be able to host this memorial-fundraising event to help give out scholarships to Lordsburg High School graduating student-athletes,” said tournament organizer and Lordsburg High School head coach for boys’ basketball and track and field D.J. Saucedo. “To date we have been able to award $30,000 in scholarships and as long as we have the help and support of our community, we plan to keep giving.”

According to Margaret Chavez, Hidalgo County Health Council Coordinator, “The semicolon symbolizes a continuation of someone's life. The semicolon is a representation of strength in the middle of a storm. It is used as an affirmation of solidarity against a plethora of mental health issues including suicide, eating disorders and addictive behaviors.”

A former teammate of the late Jessie Darnell and 2010 graduate of LHS stated in the tournament program, “The Jessie doesn’t ‘stand for’ suicide. It’s foolish to believe that a tournament in honor of Jessie’s life makes suicide something worth celebrating. His family has chosen to organize an event that acknowledges mental health as a real thing and thereby raising awareness.”

In a conjunction with the tournament, another event was held on the morning of Saturday, July 16 at LHS football stadium. The non-profit organization, The Maverick Movement in partnership with New Mexico Lt. Governor Howie Morales, hosted the Inaugural Maverick Movement 5K Fun Run & Walk for Mental Health Awareness.

There were approximately 100 participants in this first year event.

After the event, Maverick Movement Board Member and 1999 graduate of LHS Victoria Baisa stated, “I never gave my mental heal any attention until about 2015.  I had an experience that taught me to enjoy the moment. Since then, I tray and check in with myself and address my mental health when I am not feeling great.  Life can be hard so I try to have as much fun as I can.”

Baisa, the daughter of lifetime Lordsburg residents, Louie and Connie Baisa noted about the 5K event, “We were extremely pleased with the turnout [of the race]. We learned host to improve things for the next time this happens and are excited for that.  Our hope is that this event jump starts people to work on mental health as well as exercise.”

Established in November of 2021, the Maverick Movement has awarded $2,500 in scholarships as well as $1,000 in cash prizes to help clean up the community. Additionally, it has issued $500 in support of community projects. With a focus on four pillars -- clean water, quality education, economic development, and community engagement -- the Maverick Movement works to support the residents of Hidalgo County, New Mexico.