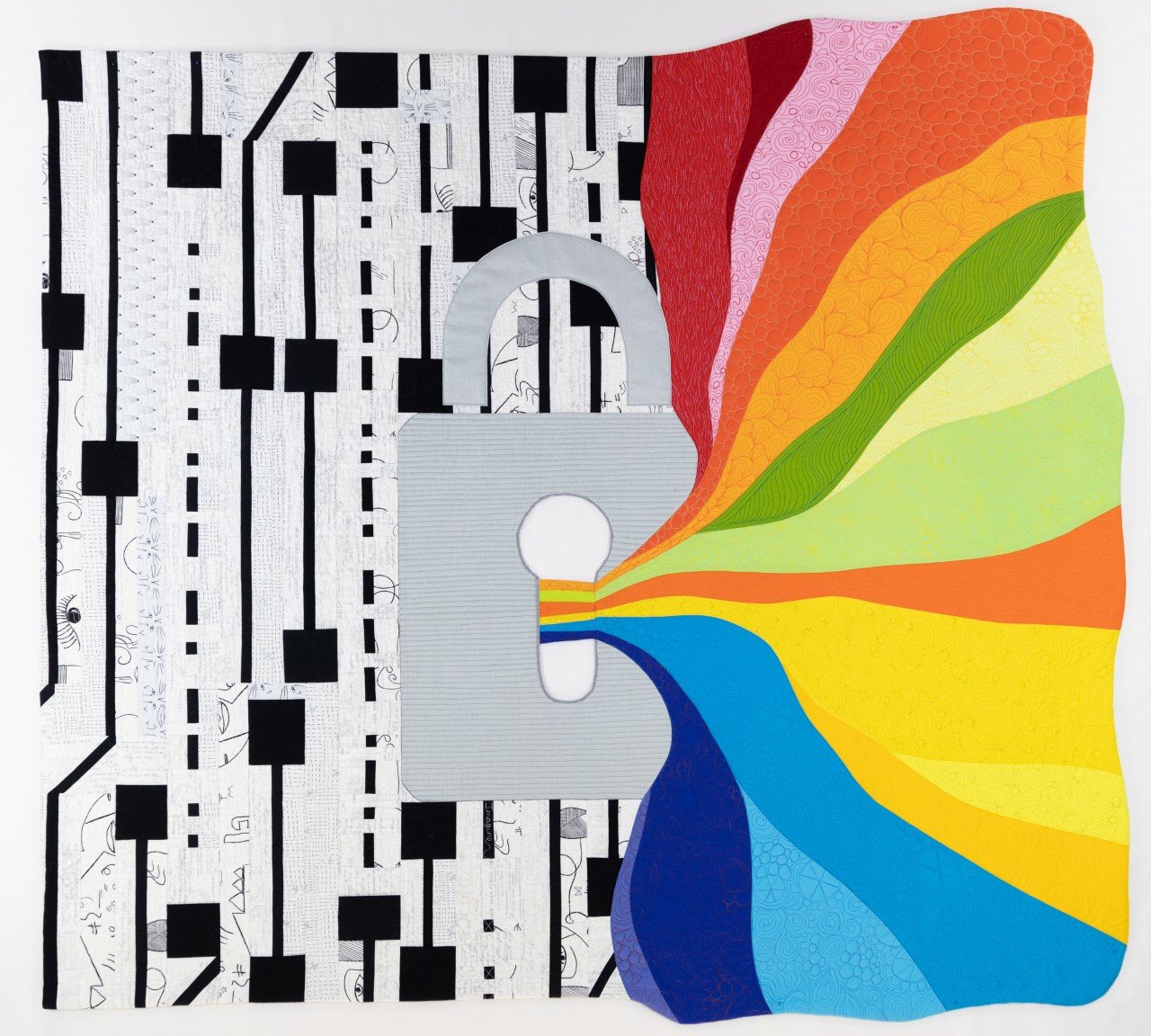 This combination black & white/ vibrant color quilt by Diana Fox in the "Cryptography" collection posits the question: "What if you can't see color? How do you imagine it?" 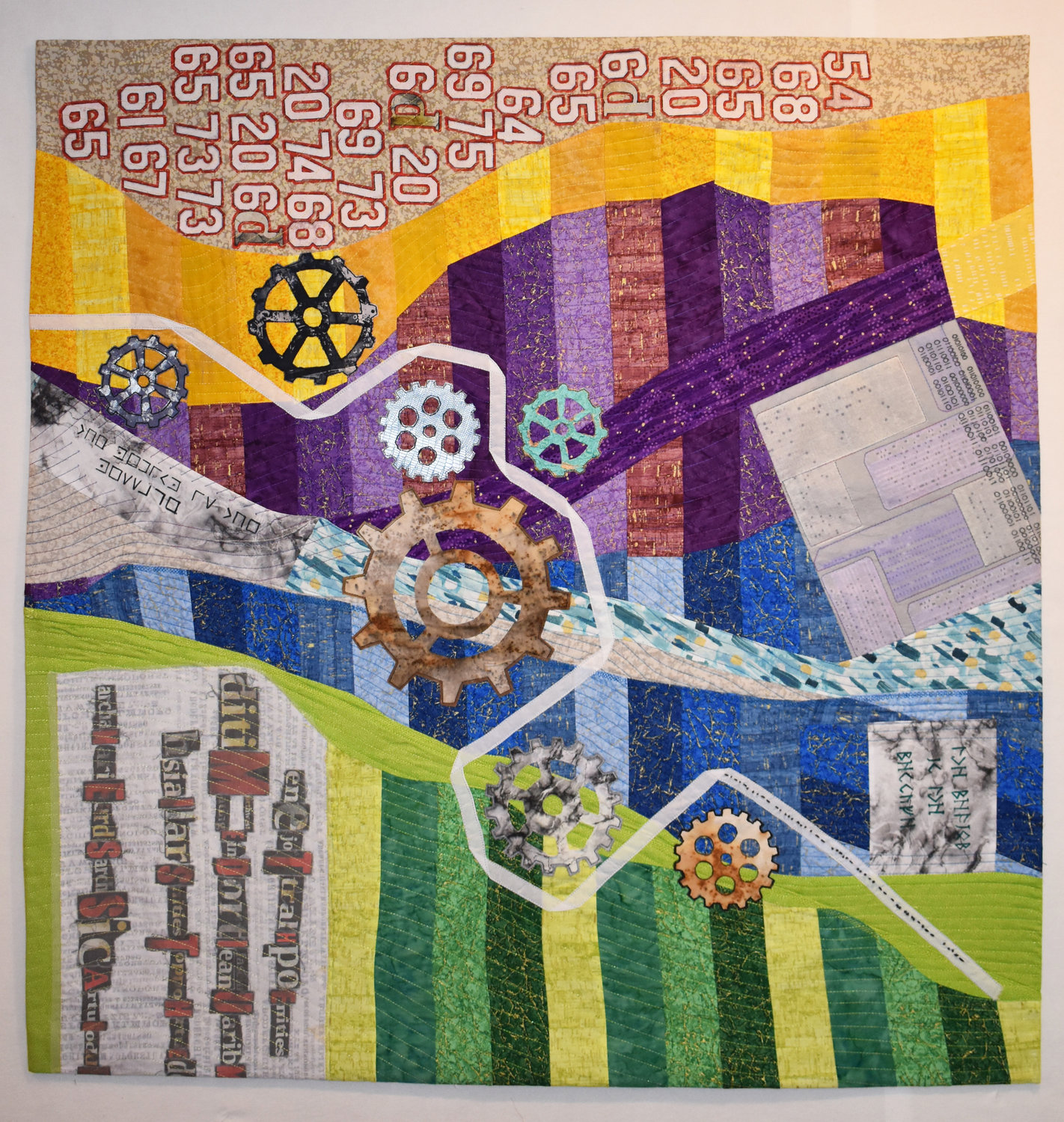 "Hidden in Plain Sight" by Bev Haring was inspired by Marshall McLuhan famous book "The Medium Is the Message." 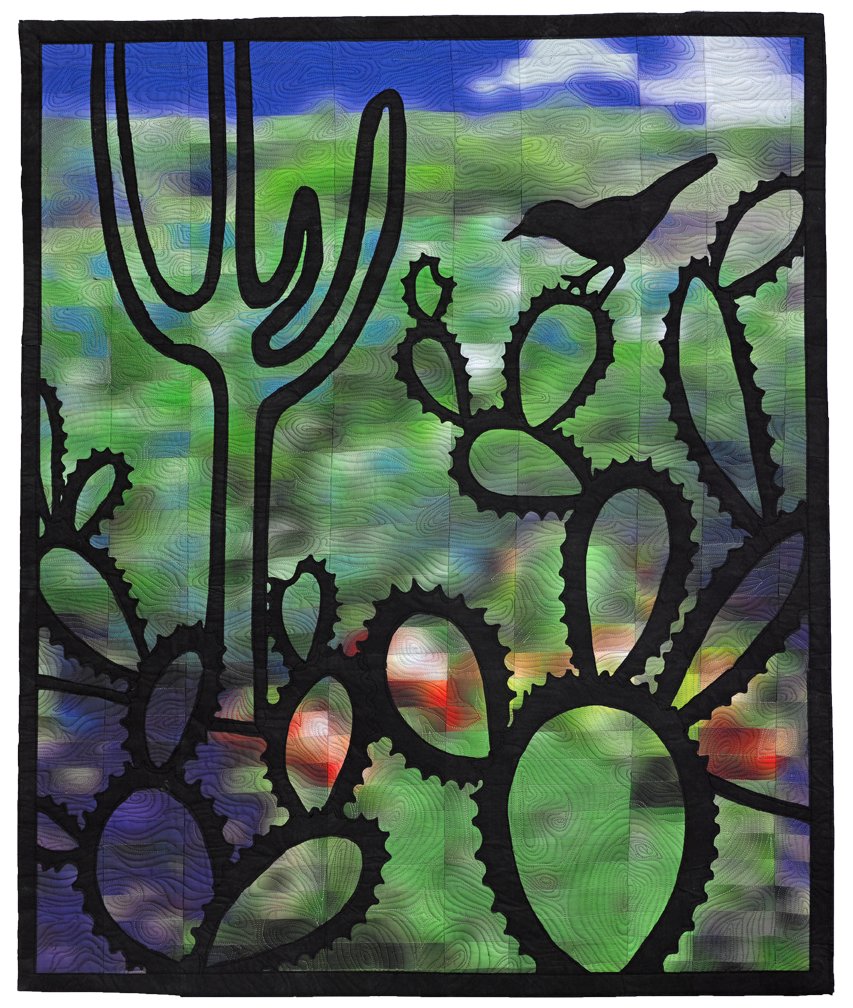 Through the Garden Gate in the Oasis collection by Vicki Conley reflects the tranquility and fertile vistas of desert oases.
Previous Next
Posted Thursday, December 1, 2022 4:49 pm
By Mia Kalish

At the beginning of this month, the Dona Ana Arts Council is presenting quilts in two wildly different themes, Cryptography, and Oasis, created by art quilt group 4 Common Corners.

4 Common Corners is composed of quilters who reside in the four states that meet in the famous Four Corners location, New Mexico, Arizona, Utah, and Colorado. The group was organized a number of years ago by Vicki Conley, who lives in Ruidoso. Vicki is famous for her art quilt depictions of national parks.  On a side note, the entire national parks sequence will be on exhibit at the upcoming Las Colcheras Quilt Show in Las Cruces in February.

Every three months, members suggest themes with the potential to explore the beauty of the Southwest, its mountains, deserts, cacti, hidden recesses; and its walking, crawling inhabitants, in the unique tradition of the art quilt. Two are chosen for the next show and the artists make their offerings that are then available for people to appreciate and fall in love with at one of the many galleries, museums and public venues around the country. The art quilts are as diverse and interesting as the towns and cities where the quilters live and equally as diverse as the Southwestern landscape.

Endemic to the Southwest are its hopes and dreams. In December’s show, Cryptography, suggested by Michelle Jackson, of Sandia Park, N.M., fits that bill. A collection of hidden ideas, “secret writing,” brought to the fore by artistic dreams, the collection includes titles such as “The World for the ASCII, Yes,” and “Hidden in Plain Sight.”

“Hidden in Plain Sight” by  Bev Haring of Longmont, Colorado, was inspired by Canadian philosopher Marshall McLuhan, famous for his groundbreaking work in media theory.

“Inspired by McLuhan's quote ‘The Medium is the Message’ each of the six encoded messages on this piece is that quote” Bev said. “But in the end the real message is about the play of shape and color, no matter what the words are.”

And McLuhan’s ideas on the how tools evolved, beginning with our hands and progressing through the different creations that emerge from their power and skill are reflected both in this piece and in the two collections, where what the 4 Common Corners artists imagine in their minds and hearts takes form with hands, fabric, thread, needles and machines.

The dramatic contrast of black and white with a vibrant rainbow in “Imagine Color” portrays color’s emergence from its modern representation in bits and bytes in keeping with the cryptographic theme of hidden messages but has a much deeper meaning.

“I thought a lot about how someone would/could acquire an understanding of color if they could not actually see it,” Diana Fox said of her piece. “What would be the key that unlocks the mind's eye to the incredible world of color?”

The second theme, Oasis, is soothing. Vicki Conley’s “Through the Garden Gate” speaks to the fertility of those glorious spots in the desert where life-giving water seeps – or sometimes even gushes and flows. The lush background composed by many small pieces of different hues of blue and green harken to the warmth of the Arizona winter, so different from the harshness of the Sierra Blanca mountains.

This month, we are fortunate to have them here in the Doña Ana Arts Council Gallery, 250 West Amador, Suite B.

The show opens on Friday, Dec. 2, from 5 to 8 p.m., hosted by quilt artists Vicki Conley of Ruidoso and Nicole Dunn of Albuquerque, formerly of Los Alamos. This will be followed by a second reception on Saturday, Dec. 10, hosted by Lynn Welsch of Mimbres.