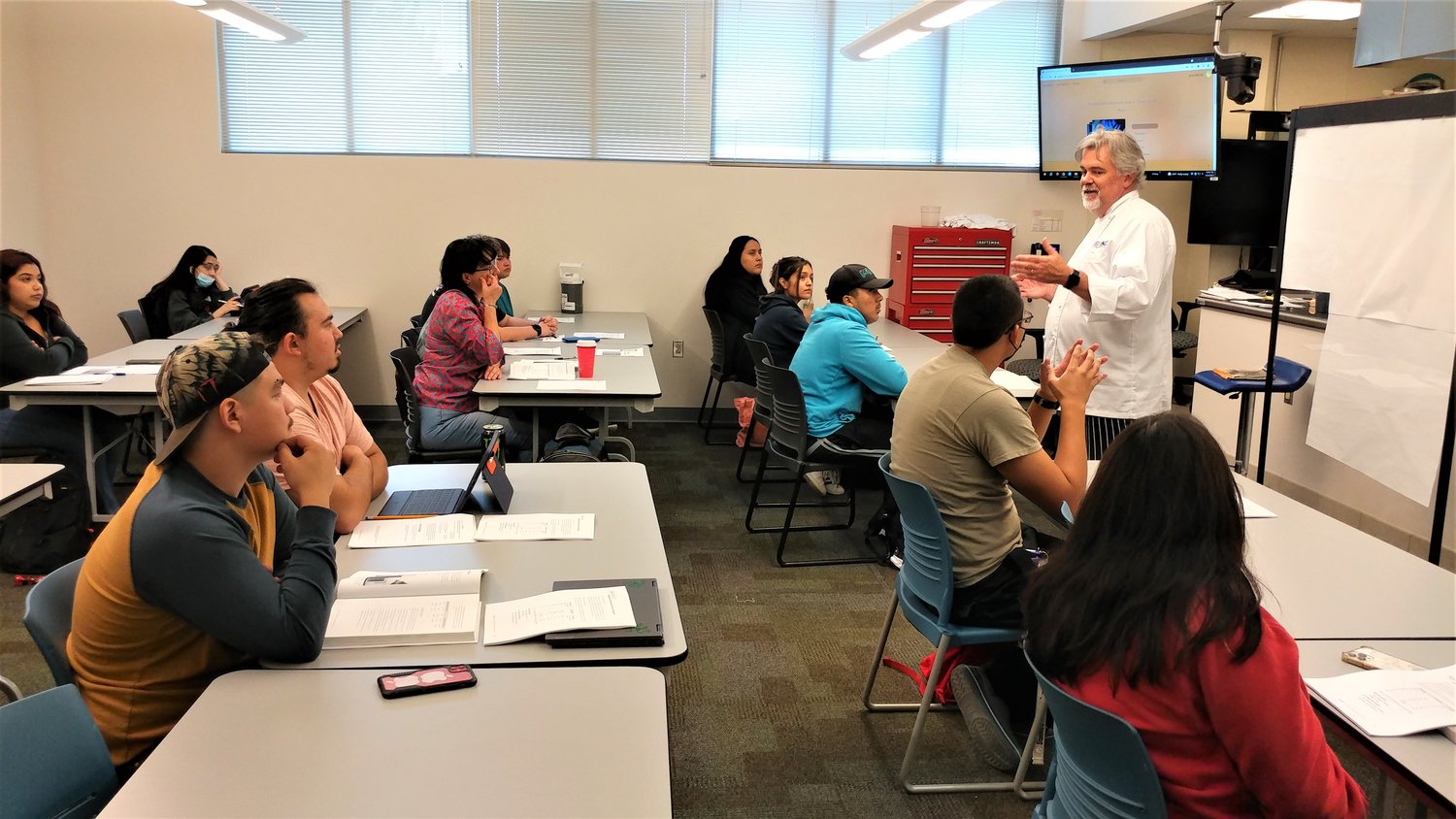 Culinary arts instructor Tom Drake in one of his classes at Doña Ana Community College.
Bulletin photos by Mike Cook 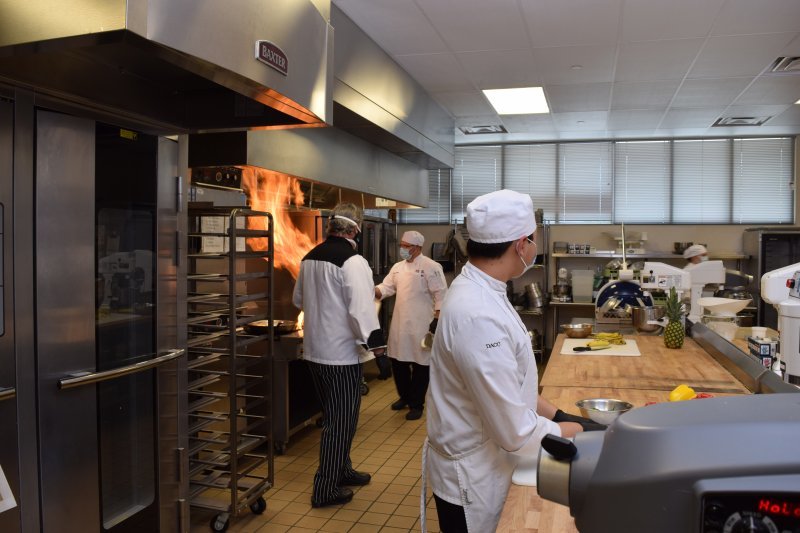 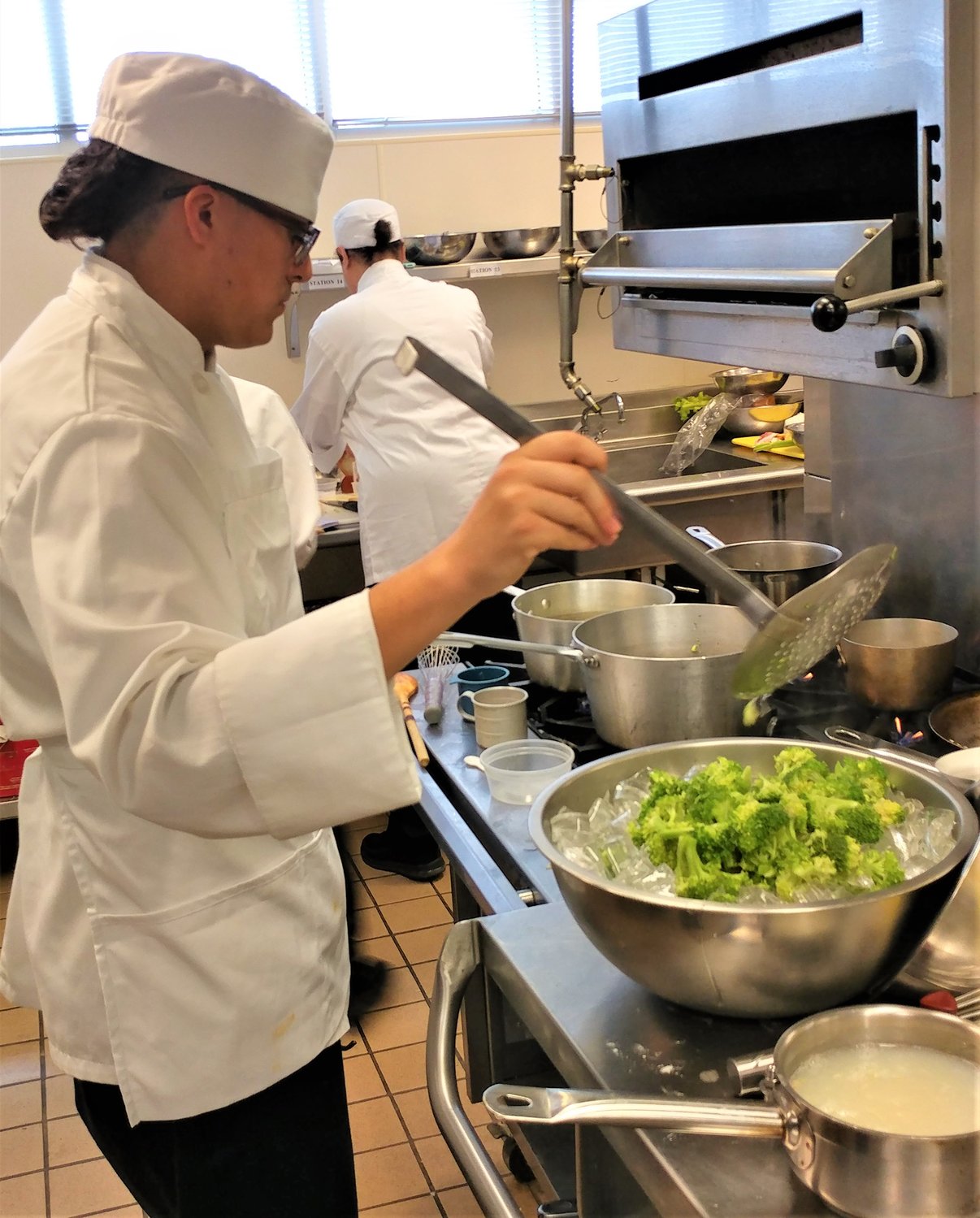 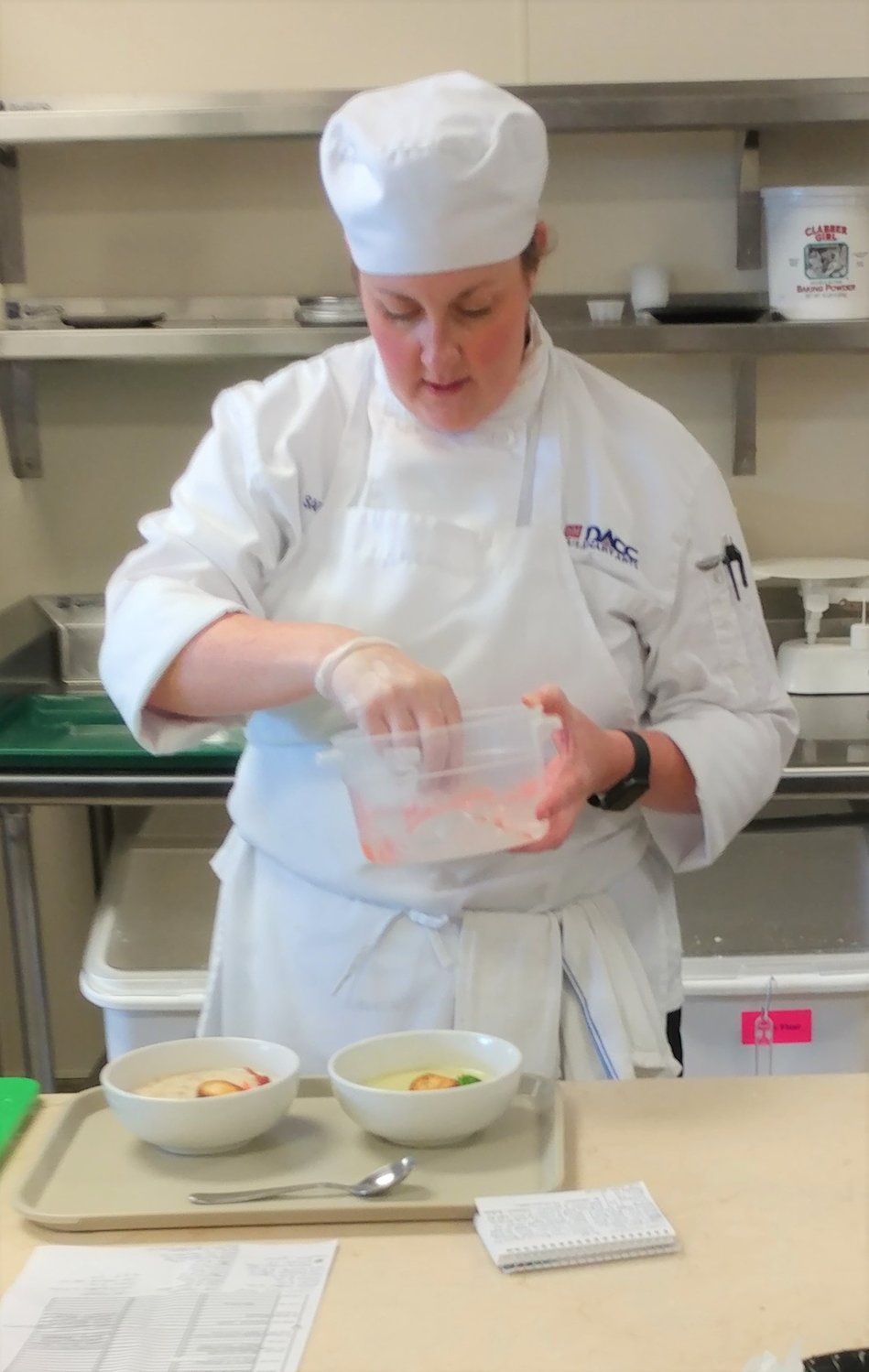 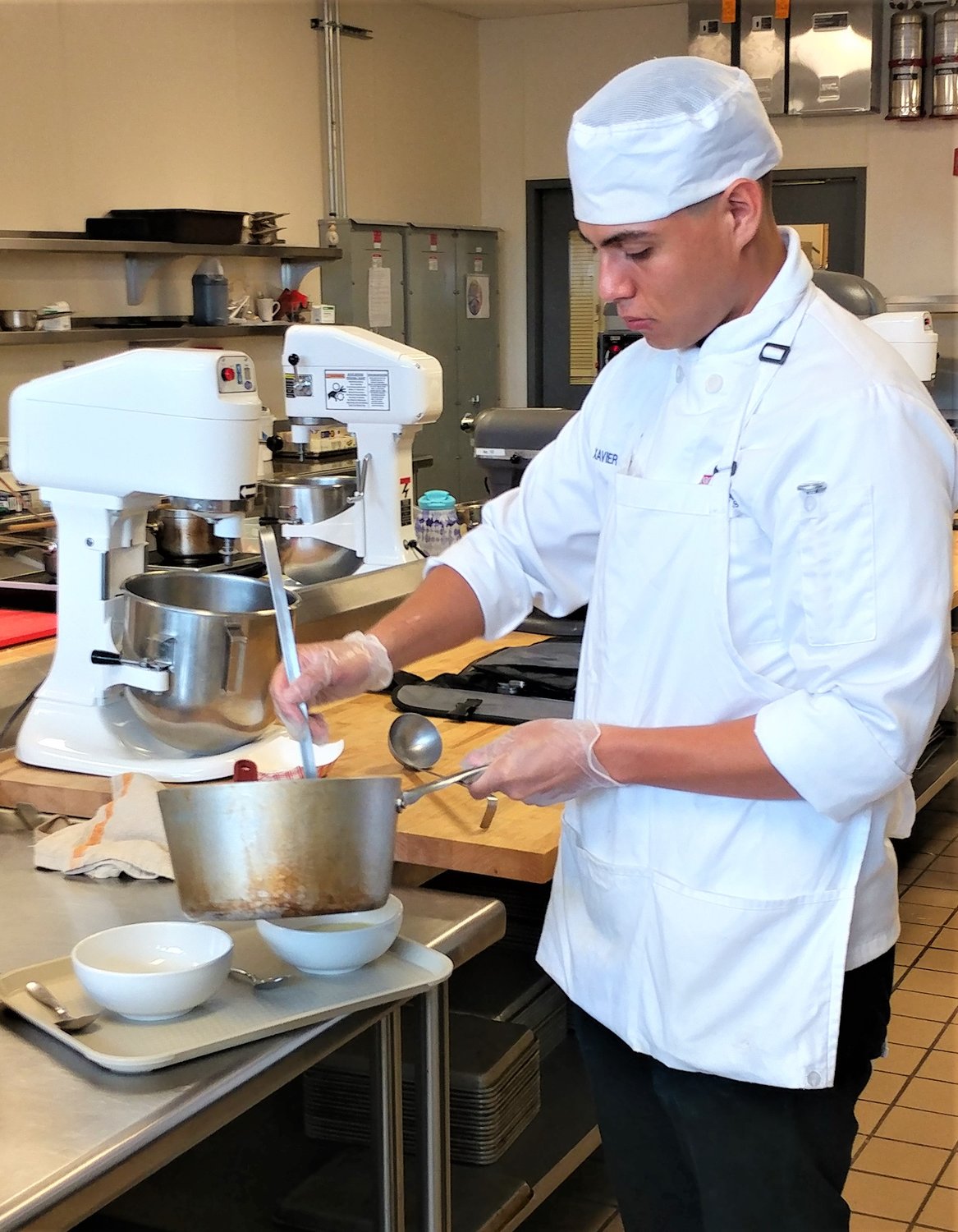 On the first day of class, about one in three students in the culinary arts program at Doña Ana Community College (DACC) is likely to list Taco Bell as his or her favorite restaurant.

Now in his eighth year as a DACC culinary arts instructor, Drake is teaching his students not only the math and science of preparing food and running a restaurant, but also the art of creating a dining experience.

“Our artwork becomes part of the person who eats it,” said Drake, who has been teaching at DACC for eight years.

Drake’s goal is for his students on their way to DACC to be thinking, “I get to go to class!”

“Through these doors, great things are created,” he said. “It’s fun and exciting and every day is a different day.”

Drake has been a chef for 32 years and has prepared meals for four people at a bed and breakfast and 25,000 at a pro sports stadium. He was executive chef for the Portland Trailblazers and the Golden State Warriors of the National Basketball Association, the NFL’s Oakland Raiders and Major League Baseball’s Oakland Athletics (he even got batting tips from home run champion Mark McGuire).

Drake also has prepared gourmet meals for the Rolling Stones, U2 and Bono. He and fellow DACC culinary arts instructor Cecilia Castro also got a visit from Gov. Michelle Lujan Grisham during her an August trip to Las Cruces.

"The DACC Culinary Program is something we are extremely proud to offer our students – tremendously skilled chefs who teach in the program, state-of-the-art equipment and many opportunities for students to show off their skills in ‘real world’ environments,” said DACC President Monica Torres. “Our graduates come out of the program with the skill and passion to enter the culinary workforce."

Drake’s and Castro’s students draw “lots of praise from businesses in the community. It’s a very intense program,” said De La Cruz, who is taking a bread-baking class at DACC this semester.

The culinary arts program “trains chefs, pastry chefs, cooks and bakers for positions in restaurants, resorts, institutions, cruise lines, hotels and any venue where quality food is prepared,” according to https://catalogs.nmsu.edu/dona-ana/academic-career-programs/culinary-arts/. “Working in state-of-the-art culinary laboratories, students learn, experiment, create and define the future of gastronomy in our region.”

Students can earn an associates of applied science degree through the program and certificates of completion in baking and pastry and in savory. Classes include CHEF 101: culinary arts kitchen orientation and math for kitchen operations; baking fundamentals, cake decorating, wedding cake design and construction and chocolate work; and banquet/catering production, international cuisine and nutrition for chefs, as well four savory core culinary courses. Future chefs can learn to make world-class pizza, prepare food underwater, create a gluten-free menu and “shock” certain foods to emphasize not only peak flavor but also vibrant color.

“A culinarian should be passionate about what they’re doing,” said Drake, whose favorite cuisine is Cajun. “The only ingredient you can’t fuss with is time,” he said.

“I haven’t cooked it yet,” was Drake’s reply when asked about the best meal he has ever prepared.

The DACC culinary arts program has applied for a beer and wine license, Drake said, and future plans for the program include opening a fully operational bistro on the East Mesa campus and expanding cooking classes on DACC campuses in southern Doña Ana County.

Drake volunteers for the Dress the Child of Las Cruces program and is a consultant on the new Casa de Peregrinos emergency food program building currently under construction on Picacho Avenue.

Working in DACC culinary arts “is a chef’s dream job,” he said.