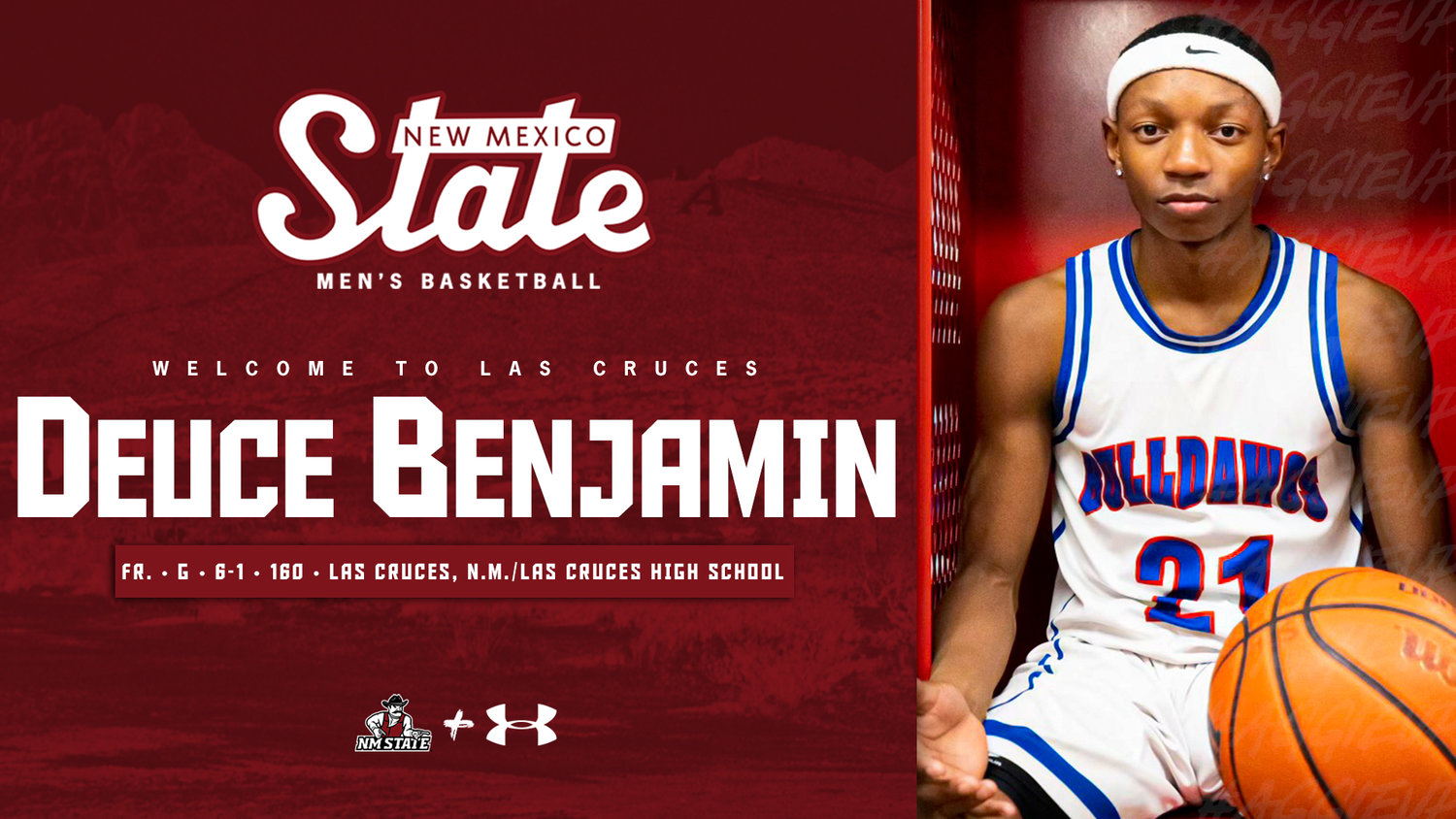 Saturday afternoon, one week after he made it official on Instagram, freshman guard Deuce Benjamin committed to join NM State ahead of the 2022-23 season.

Following in the footsteps of his father, William Benjamin, who donned an NM State uniform from 1988-92, Deuce Benjamin is the fifth signee of the Heiar coaching era and follows the likes of Johnny McCants, Tennessee Owens and Bryce Rewalt who recently remained in the City of Crosses to continue their basketball careers.

Deuce Benjamin | G | Fr. | 6-1 | 160 | Las Cruces, N.M./Las Cruces High School | Highlights
• A second-generation Aggie, Benjamin officially committed to NM State on Saturday, April 16, in an announcement made on his Instagram page.
• The Gatorade MaxPreps Player of the Year in the state of New Mexico, Benjamin poured in 25.3 points per game while adding 5.7 rebounds, 6.9 assists and 2.8 steals per outing for a Bulldawgs team which went 31-1 in 2021-22.
• This past season's Player of the Year honor was the second in as many seasons for Benjamin who collected NMAA Gatorade New Mexico Boys Basketball Player of the Year laurels following the conclusion of the 2020-21 campaign.
• With Benjamin on their side, the Bulldawgs piled up an eye-popping 102-6 record through the last four seasons. Included in that mark were three appearances in the NMAA 5A State Championship game as well as a NMAA 5A State Championship in 2020.
• While at Las Cruces High School, Benjamin was prepped by his father, William, who has been the head coach of the boy's basketball program at that institution since May of 2009.

What they're saying about Benjamin
NM State head coach Greg Heiar | "I'm excited to announce Las Cruces' own Deuce Benjamin to this year's recruiting class. I think we got a steal in Deuce. His career at NM State will be full of game-changing, athletic plays. His athleticism is on another level, he has a great change of pace to his game and his basketball confidence will continue to grow through what we do daily as well as his his work ethic and love for the game. Deuce plays with a major chip on his shoulder and we love that about him. He stands out as a complete student athlete and another guy with an energetic personality. We can't wait to coach Deuce and see him grow, mature and develop during his tenure as a Aggie. #AggieUp

For complete coverage of NM State men's basketball as the Aggies prepare for the 2022-23 season, visit NMStateSports.com - the official home of Aggie athletics - and follow the Aggies on Facebook (NM State Men's Basketball), Twitter (@NMStateMBB) and Instagram (@NMStateMBB).