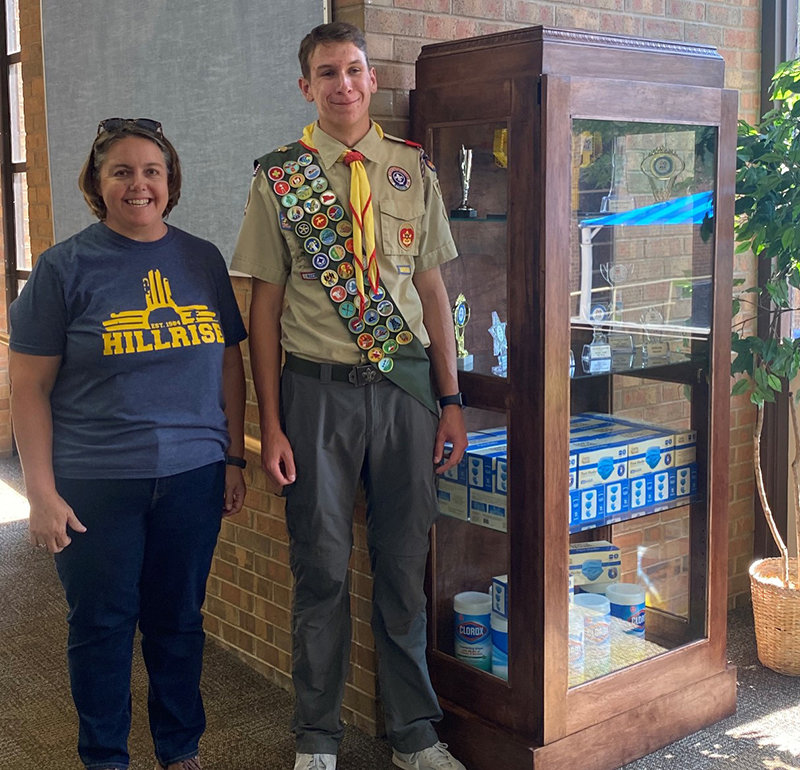 Las Cruces Eagle Scout Liam Rutherford wanted to learn woodworking and do something for younger kids. He found a way to do both by building a trophy case for Hillrise Elementary School, 1400 S. Curnutt St., as an Eagle Scout project.

Liam is a senior at Centennial High School, said his father, William Rutherford.

“Liam has been in scouting since joining as a Cub Scout in first grade,” William Rutherford said.

Liam said he picked Hillrise as the site for his project as a way to give back.

“Several of my friends and fellow Scouts went to this school and I have been helped by many of the teachers here,” Liam said. “When the time came for me to choose a group to help, I thought of Hillrise.”

Liam raised the funds for the materials through a GoFundMe page and a donation from Art Glass Inc.

Hillrise Elementary Principal Karin Hite and the Hillrise PTO (Parent-Teacher Organization) suggested to Liam that the school could use a trophy case, since it had no place for school awards, which wound up in boxes in classrooms.

“This project would give these awards a centrally located home where all the students can appreciate them,” Liam said. “I found a set of plans and my friend, Cayden, and his dad spent many evenings helping me build it. My fellow Scouts and I learned so much.”

“I am so proud that Liam chose Hillrise for his Eagle Scout project and I know that the trophy case will prove to be a lasting and useful gift to our school,” Hite said.

Liam and fellow Boy Scouts of America Troop 180 donated the case at the end of the school year. As part of his project, Liam filled the case with personal protective equipment to help get staff ready for the fall semester.