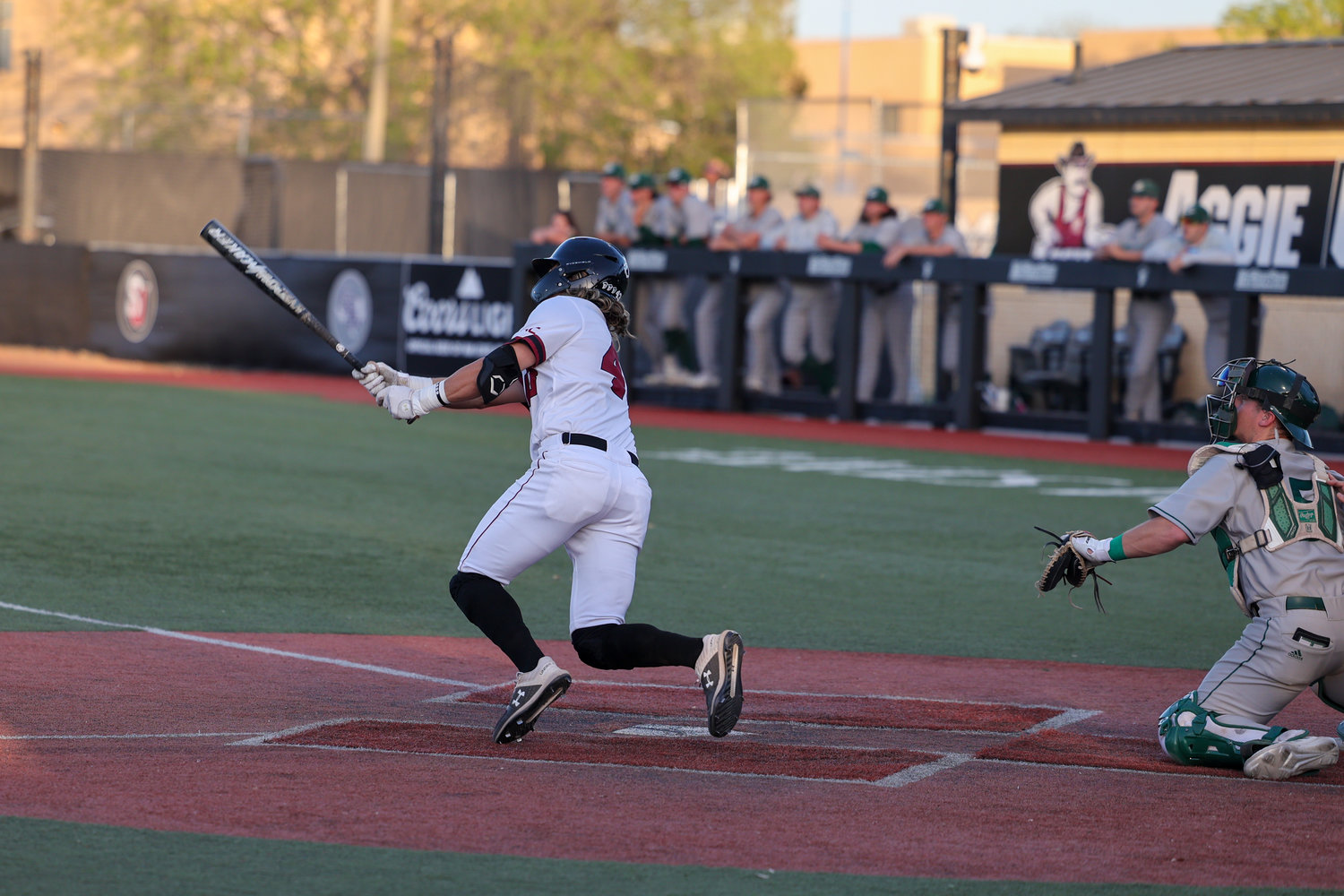 LAS CRUCES, N.M. –  A combined eight hits from Gunner Antillon and Kevin Jimenez helped lift the NM State baseball team on Friday night over UTRGV, 11-8. In the win, Antillon and Tommy Tabak combined to score seven runs as Josh Laukkanen picked up his first win of the season on the mound.

The Aggies jumped out to a hot start in the first inning when Antillon homered to left, scoring Tommy Tabak and giving NM State a 2-0 lead. After being forced into the starting lineup just before first pitch, Cade Swenson held the Vaqueros scoreless through two innings.

In the third inning, UTRGV scored in bundles and placed a six on the scoreboard. The Vaquero half of the inning was highlighted by a three-run home run from Freddy Rojas Jr.

Down four in the fourth inning, the Aggies began to chip away at the deficit. Logan Gallina singled through the right side, which scored Jimenez, who led off the inning with a single. Freshman Cal Kilgore doubled off of the wall in right field, scoring a pair and bringing the Aggies back within a run. The Vaqueros added an insurance run in the top of the fifth inning to push their lead back to two.

A two-run lead was never safe with the NM State bats catching fire on Friday night. After a walk from Tabak and a single from Antillon, Jimenez singled to right field and brought NM State within one. Antillon eventually scored the tying run on a passed ball and the two teams were knotted up at seven.

The trend of posting crooked numbers on the scoreboard continued in the Aggie half of the sixth. Antillon singled for his third hit of the ballgame and scored Kilgore from second base. As he did the inning previously, Antillon capitalized on a defensive miscue by the Vaqueros and scored on an error, giving NM State a 9-7 lead.

UTRGV put on run on the board in the eighth inning but just as it had done all night, the NM State offense had a swift response. Antillon tripled to bring himself within a double of the cycle and scored Tabak from second. In the following at-bat, Antillon once again scampered home on a Vaquero mistake – This one a wild pitch.

The bottom of the ninth inning saw the bases full of Vaqueros with two outs. On a 1-2 pitch, Alex Bustamante recorded his second strikeout of the inning and notched his fourth save of the season.

The Aggies will take on UTRGV once again on Saturday with a chance to win the series. First pitch from Presley Askew Field can be on the WAC Digital Network or heard on 91.5 FM KRUX beginning at 2 PM.