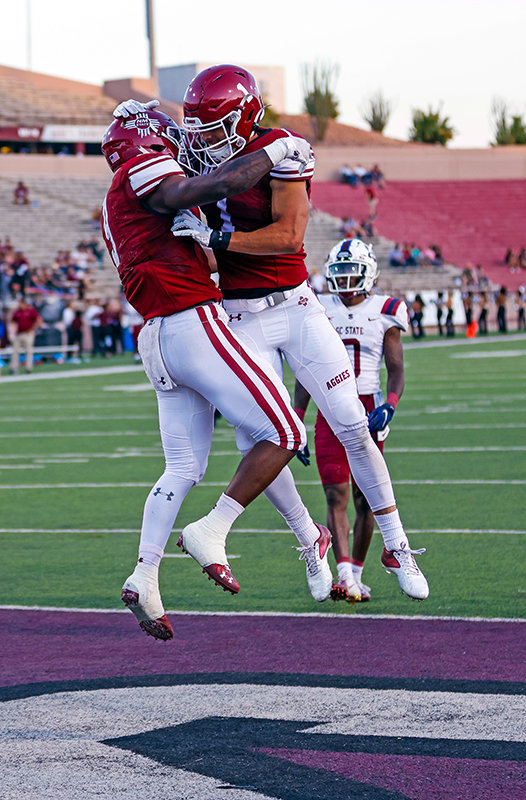 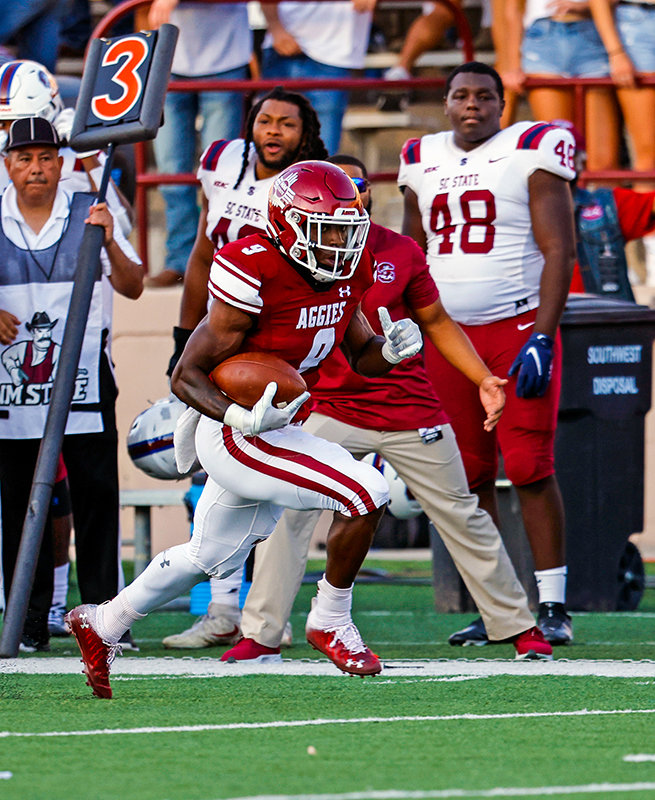 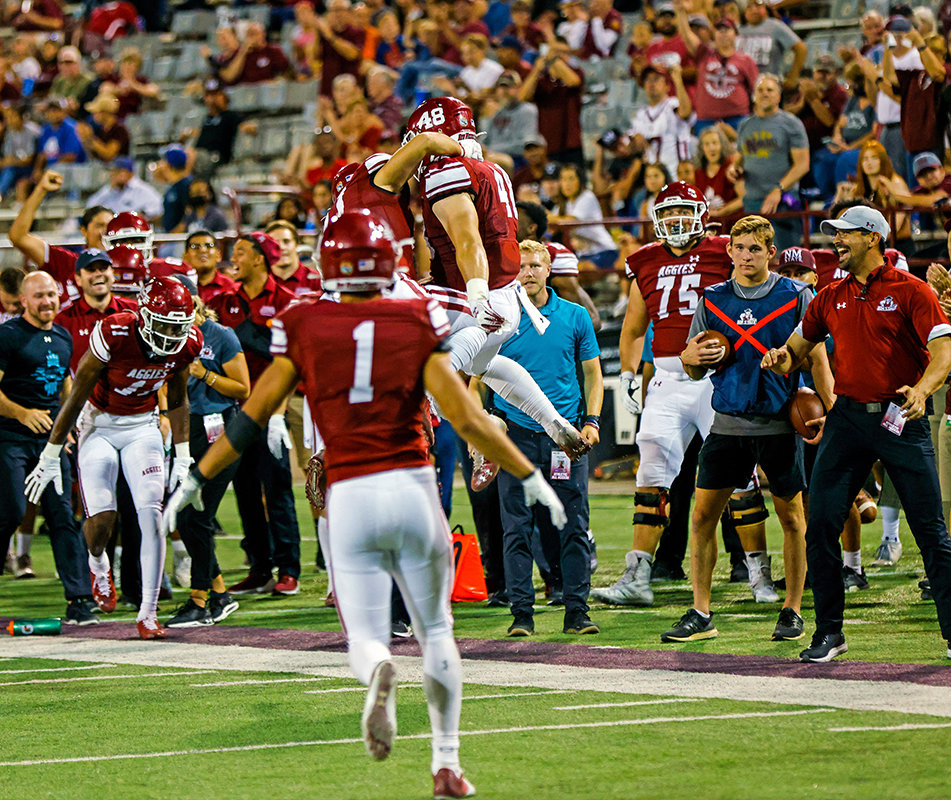 Making his first career start after being thrust into action last week against New Mexico due to injuries to Jonah Johnson and Weston Eget, Maldonado starred Saturday, completing his first six passes of the evening and 12 of his first 13 overall. In the end, Maldonado completed 24-of-32 passes for 321 yards and three scores.

In total, nine different Aggies (1-3) recorded a reception led by Robert Downs III who hauled in a team-best five balls for 51 yards.

For the second consecutive week, Isaiah Garcia-Castaneda was the Aggies leading receiver. The Saddleback College product caught three passes for 78 yards including a 41-yard touchdown reception in the second quarter.

On the ground, redshirt freshman Juwaun Price ran for 62 yards on 13 carries and added three catches for 53 yards through the air. Price scored twice on the ground, and added a 58-yard kickoff return to finish with 191 all-purpose yards, becoming the first Aggie since Jason Huntley to rush for multiple scores in a game. Huntley ran for three touchdowns against UTEP on senior day back in 2019 (Nov. 23).

Las Lunas native O’Maury Samuels also found the endzone for the Aggies, using a three-yard rush in the first quarter to record his first-career touchdown.

In defeat, South Carolina State (0-3) quarterback Corey Fields Jr, completed 30-of-47 passes for 352 yards and four scores. Fields recorded 188 of his yards in the second half.

For the third time in four weeks, the Aggies started the ball game on offense and used an impressive 26-yard connection from Maldonado to Price on the first play of the game to spark a nine-play 81-yard drive that culminated with a 14-yard rush by Price.

After a quick three-and-out from the NM State defense gave possession back to the offense on the NM State 19, Maldonado orchestrated an 11-play, 85-yard drive that ended with the three-yard score from Samuels. The drive featured two 20+ yard plays including a 25-yard strike to Price and a 20-yarder to Garcia-Castaneda.

The drive was the second of five consecutive touchdown drives that the Aggies recorded to open the contest.

With the Aggies up 13-0, kicker Ethan Albertson lined up for the point-after attempt, but Patrick Godbolt blocked the attempt. The loose ball fell to tight end Thomaz Whitford who successfully recovered the ball in the endzone for two points, putting the Aggies up 15-0 with 3:43 to play in the first quarter.

SC State used two first downs to march into NM State territory for the first-time time on their second possession of the game, but the Aggie defense forced a punt on fourth and five from Dyson Roberts.

Taking over on the 20-yard line, Maldonado used a 15-yard connection to Downs III to ignite a seven-play, 80-yard drive that gave the home team a 22-0 lead with 12:02 left in the second period. NM State’s third scoring drive in-a-row ended with an eight-yard rush from Price.

South Carolina State and Fields Jr recorded the first of two scoring drives in the opening half, using a nine-play, 75-yard drive to cut the Aggie advantage to 22-6 with 7:31 to play in the second. The drive ended with a 14-yard run from Kendrell Flowers and a missed PAT.

The Aggies responded, using eight plays to march 75 yards for the fourth touchdown of the night.

Maldonado capped the drive with a 17-yard strike to Garcia-Castaneda and a 30-yard dime to Jared Wyatt in the right-hand corner of the endzone that gave NM State a 29-6 lead with 4:47 left.

During the waning moments of the opening half, the Bulldogs used a 20-yard strike from Fields Jr to Will Vereen and a 37-yard pass to Richard Bailey for a touchdown that cut the NM State lead to 29-13 with 2:00 to play.

Needing an answer, Price jumpstarted the Aggie's fifth and final touchdown drive of the half, using a 58-yard return to set up the offense inside Bulldog territory.

On the very next play from scrimmage, Maldonado hit a wide-open Garcia-Castaneda for a 41-yard score that gave the Aggies a 36-13 lead with 1:43 to play.

The Aggie defense forced another SCST punt with 39 seconds to play, giving Maldonado and the offense one last chance to add points before the break.

Maldonado used a 20-yard rush from Price and a 22-yard connection to Andre Bodison to march the ball to the visitor's 38. Two plays later, the signal-caller spiked the football, setting the stage for Albertson to attempt a 49-yard field goal that ended up just short, as the Aggies took the 36-13 lead into the break.

On the Bulldogs opening drive of the second half, corner DJ McCullough intercepted a third-down pass from Fields, at the SCSU 48. Using an impressive 19-yard return combined with a 15-yard personal foul, the Aggies took over at the SCST 14.

Maldonado used a seven-yard completion to Bodison and an eight-yard scramble to set up a first-and-goal situation. After a Samuels rush for two pushed the ball to the one-yard line, Samuels ran the ball again on second and goal and was stopped for no gain.

Facing a third down from the opposing one, Martin and the Aggies called upon another trick play, as linebacker Eric Marsh lined up in the Aggies backfield. Maldonado rolled to his left and fired a perfect strike to a wide-open Marsh who secured the Aggie's sixth and final touchdown of the night.

The score gave NM State a 43-13 lead with 11:42 to play in the third, and marked the final successful drive of the night for the offense, as the Aggies would manage just two net yards over the final six drives.

South Carolina State took advantage of the Aggie's struggles on offense, scoring three touchdowns over their next five drives.

The first Bulldog touchdown came on 12 play, 75-yard drive that included a big fourth down and nine completion. The conversion set up a six-yard pass from Fields Jr to Hezekiah Massey that cut the Aggie lead to 43-20 with 4:07 to play in the third quarter.

Following the first Aggie punt of the contest, a 45 yarder from Josh Carlson, Fields Jr took over at his 29-yard line with 2:08 to play in the quarter. On first down, Fields Jr found Kendrell Flowers for four yards. On the ensuing second-down pass, Fields was intercepted by cornerback Syrus Dumas. The pick was Dumas’ first of his career and came in his first career start.

On the ensuing Aggie drive, Maldonado and the offense stalled on fourth down and six from SCST 37, giving the ball back to the Bulldogs with 14:21 to play in the contest.

Fields Jr and the Bulldogs used a personal foul on Garrett Bishop that negated a three-yard loss on first down to spark a seven-play 63-yard drive. The drive ended in an 18-yard connection between Fields Jr and Vereen that cut the NM State lead to 43-27 with 10:49 left.

After back-to-back punts from the Aggies and Bulldogs set NM State up first and 10 from the 25 with 5:59 to play, a holding penalty stalled another Aggie drive.

The stalled possession sparked an eight-play 70-yard South Carolina State drive that ended with a 20-yard pass from Fields Jr to Kendrell Flowers and a two-point conversion that cut the NM State lead to 43-35 with 1:35 to play.

Needing possession back, South Carolina State attempted an onside kick that Downs III was able to recover with 93 seconds to play.

Looking to kill the remaining time on the clock, NM State managed just four yards on the ensuing drive. The drive amassed just 24 seconds, as the Bulldogs used all three timeouts to force another Carlson punt.

The punter delivered for the Aggies, using a 43-yard kick that was downed at three to pin the Bulldogs back.

Down eight points with 63 seconds to go, SCST found a modest eight-yard gain on first down, before Fields Jr was intercepted by linebacker Nick Giacolone with 58 seconds left.

The interception, the third of the night forced by the Aggies, sealed the first NM State victory of the season and the first win in Las Cruces in 665 days.

“I’m just thrilled for our players after everything they've been through, and all of the adversity we’ve faced. This is a very special group of guys. They've done everything we've asked them to do and they've done everything the right way. I know it didn't end the way we wanted it to, you want to finish these games better, but it's a win. Our kids deserved it. Watching the celebration in that locker room, our guys having fun with each other was a special moment. Overall, I'm just thrilled for them. We’ve got a lot of work to do to keep winning and get better but this was still a big deal for these kids”

ON DINO MALDONADO’S PLAY AND THE SECOND HALF STRUGGLES:

“We were trying to run a lot of play actions and screens for Dino early because those are plays where he didn’t need to make a read. It was just a case of ‘you're going to throw it to this guy’, it's a screen. That allowed Dino to get off to a good start. And of course, everybody makes adjustments at halftime. So, we faced a lot of man coverage in the second half which forced us to make throws and reads. That’s where we struggled and didn’t do as well as we needed to. South Carolina State brought a lot of pressure in the second half and Dino quite frankly doesn’t have the experience needed to handle those situations quite yet. He’ll get there.”

“We’re close to getting both Jonah and Weston back. Both of them could have probably played tonight if we needed them to. But we wanted to try and get out of this game without getting them further injured so we could have them the rest of the way. We’ll see where they are this week. I won’t know how either of them is until we get on the practice field Tuesday. We’ll evaluate both of them next week in practice, but we need to be ready and better as a team because we face a much different team next week.”

The Aggies return to action next Saturday at Aggie Memorial Stadium when the Rainbow Warriors of Hawaii visit Las Cruces for a 6 p.m. kick. The contest will serve as the annual “AG Day” and NM State’s Homecoming contest.