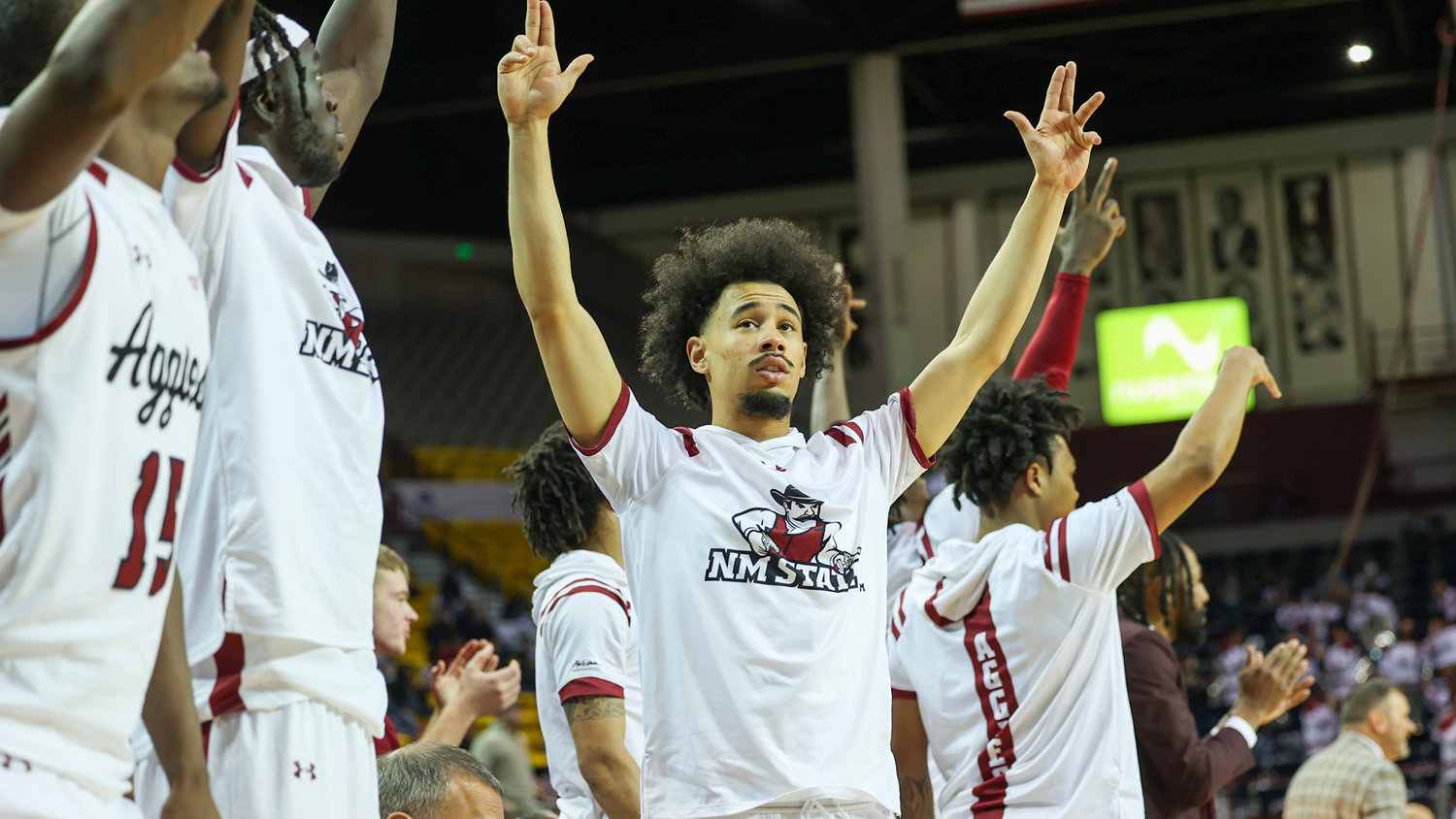 THE OPENING TIP• A road trip never before taken by the NM State men's basketball team is in store as the Aggies set out on a journey to east Texas for their next pair of WAC contests. The league-leading Aggies' first stop is Huntsville, Texas, for a Thursday evening showdown with Sam Houston. Tip-off inside Bernard G. Johnson Coliseum is set for 5:30 p.m. MT.• ESPN+ and the ESPN app will broadcast each and every second of the fourth all-time meeting between the two clubs. Tom Franklin and Mike Lucas will be on the call for the inaugural bout featuring the Aggies and Bearkats in Huntsville, Texas, and the first tilt between the two in almost two decades.• Over the airwaves, legendary radio play-by-play man Jack Nixon will set up shop courtside to call the action.• Nixon's play-by-play and analysis can be heard on 99.5 Zia Country FM in Las Cruces, N.M., and nationwide on The Varsity Network app.• Affiliate stations of the Aggie Sports Network can be tuned in to in Artesia, N.M. (990 AM), Carlsbad, N.M. (1240 AM), Gallup, N.M. (94.9 FM), Alamogordo, N.M. (103.7 FM) and El Paso, Texas (1380 AM). All of those stations will also carry Nixon's commentary of Thursday evening's tilt.

LAST TIME OUT | NM State 77, Abilene Christian 63 | Saturday, Jan. 15, 2022• Teddy Allen put on one of the greatest individual performances in the history of the Pan American Center by pumping in career-high tying 41 points to lead NM State to a 77-63 win over Abilene Christian.• The Phoenix, Ariz., product shot 13-of-20 from the field to finish with those 41 markers. He drilled six of his 11 tries from long distance, too, while adding seven rebounds, two assists, a blocked shot an a steal.• Allen's 41 points came almost 20 years to the day since the last 40+ point outing by an NM State player. On January 26, 2002, Eric Channing fired in 41 points for the Aggies in an 88-71 victory over North Texas inside the Pan American Center.• Among all NCAA Division I men's basketball players this season, Allen's 41 points are the fifth-most in a single game and the most by any WAC player.• Only two NM State players - the late Jimmy Collins and Ernest Patterson - poured in more points in a game inside the Pan American Center than Allen did Saturday night. Both Collins (vs. Air Force on Feb. 14, 1970) and Patterson (vs. New Mexico on Dec. 11, 1982) went for 42 points  in a single game.• All-time, Allen's 41-point outing ranks fifth on the list of single-game scoring performances in NM State history. Allen and Eric Channing are the only individuals who have scored 40 or more points for NM State in the 21st century.• Efficiency was the name of the game for Allen who needed just 20 shots to get to the 41-point mark. Over the last three seasons, he's one of just eight NCAA Division I players who needed 20 or fewer shots to rack up 41 or more points in a single game. Also included on the list is former Iowa star Luka Garza.• With Allen shouldering most of the load on offense by accounting for 53.2-percent of the Aggies' point total, that didn't leave too many more markers to go around. Still, Clayton Henry and Jabari Rice added 10 points apiece in NM State's win.• Henry's 10 points made it two games in a row in which the guard out of Calgary, Alberta, Canada went for double-digits. Over the last two games - both tilts in which Henry appeared in the starting lineup - the senior is averaging 12.5 points on shooting splits of .667/.600/.750.• NM State hit a season-high 47.8-percent (11-of-23) of its three-pointers in the victory. That figure is the 10th-best three-point field goal percentage in a game during Jans' tenure as the Aggies' head coach.• For the first time since midway through the 2018-19 season, NM State had a fully healthy complement of players available to take part in the tilt. The Aggies were never, ever able to boast their full roster of players at any point through the 2019-20 and 2020-21 seasons due to various injuries suffered by a multitude of team members.• Thanks to Allen's high-scoring outburst, he was named the WAC Player of the Week for the second time in the 2021-22 season on Monday, Jan. 17. He becomes the first Aggie to win multiple WAC Player of the Week awards in the same season since Jemerrio Jones (three) and Zach Lofton (four) did so in the 2018-19 campaign.

LAST TIME OUT vs. SAM HOUSTON | Sam Houston 78, at NM State 77 (OT) | Saturday, Nov. 25, 2005• NM State lost its grip on a 13-point second half lead and dropped a 78-77 decision to Southland Conference foe Sam Houston State inside the Pan American Center. The matchup was the first between the two programs since 1992.• Once in the overtime session, Elijah Ingram dropped in eight of his 17 points. That wasn't enough to lift NM State to a win, though.• Sam Houston State's rebounding edge was a major part of the Bearkats' win. NM State was at a 51-37 disadvantage on the glass in its setback and the Bearkats' John Gardiner led the charge with a 13-point, 11-rebound double-double.• It was the offensive rebounding department which especially hurt the Aggies. The Bearkats collected 23 offensive boards compared to just nine by the hosts.• Neither team shot it particularly well from the free throw line as the Aggies and Bearkats combined to put in just 36 of their 68 total tries from that distance (52.9-percent).• Shaun Davis finished with a team-high 19 points on a 6-of-9 effort from the field for the Aggies who suffered their second loss of the 2005-06 season.• Tyrone Nelson added 12 points for the Aggies, but needed 11 field goal attempts to hit that point total.• The game was Reggie Theus' third as NM State's head coach after being hired as the team's bench boss ahead of the 2005-06 campaign. The Aggies went on to finish 16-14 that year, helping Theus and company lay the foundation for a WAC Tournament title and NCAA Tournament appearance the following season.

SCOUTING SAM HOUSTON | ROSTER | SCHEDULE | STATISTICS• El Paso, Texas, turned out to be the city where Sam Houston turned its 2021-22 season around. Since taking part in UTEP's WestStar Sun Bowl Invitational, the Bearkats have gone 6-2 and appear to have shaken off a 4-7 start to the year.• Rebounding, three-point shooting and the play of Savion Flagg are the three primary prongs of the Bearkats' recent successes. Sam Houston is one of the nation's best when it comes to crashing the offensive glass as they go for 13.42 offensive rebounds per game - the 18th-best in the nation. Defensively, the 'Kats attack the glass at a rate of 39.16 caroms per game which is the 48th-best average nationally.• Though the percentages aren't necessarily the greatest, the attempts and makes from long range have been there by the Bearkats. Sam Houston ranks eighth in the land in three-pointers attempted (515) and 12th in long balls made (180). The Bearkats have drilled 35-percent of their tries from long range, the fifth-best accuracy rate in the WAC.• Flagg is the focal point of the Bearkats' offense as he ranks second in the WAC and 24th nationally in scoring at a clip of 19.8 points per game. The lion's share of Sam Houston's field goal tries are funneled through the Texas A&M transfer, too, as he ranks among the top five players nationally in both field goal attempts (third, 297) and field goals made (fifth, 135).• He and Demarkus Lampley represent two of the top three trifecta attempt leaders in the WAC. Between the two of them, they have accounted for 264 of the team's 515 tries from long range (51.2-percent).• With Flagg and Lampley headlining the Bearkats' scoring show, that leaves Jaden Ray to oversee the team's offense as a whole. Ray ranks fourth in the WAC with an assists per game average of 4.4 while his 83 helpers are the most by any WAC player.• Defensively it's Ray who does a lot of the thievery. His 25 steals are the eighth-most in the WAC.• Sam Houston is hosting the Aggies for the first time in the history of the Bearkats' program. Each of the previous three meetings between the two teams took place inside the Pan American Center in Las Cruces, N.M.• Sam Houston has ratcheted up the defensive intensity a couple of notches, too, holding each of its last three opponents to fewer than 65 points. The Bearkats' scoring defense allows just 65.3 points per game to the opposition - the third-best figure in the WAC.

COMING UP NEXT• Texas' oldest town is the destination for the Aggies once they wrap up their brief stay in Huntsville. NM State travels to Nacogdoches, Texas, for a Saturday afternoon showdown with WAC newcomer SFA. The inaugural meeting between the Aggies and Lumberjacks is set for 1:00 p.m. MT inside William R. Johnson Coliseum.