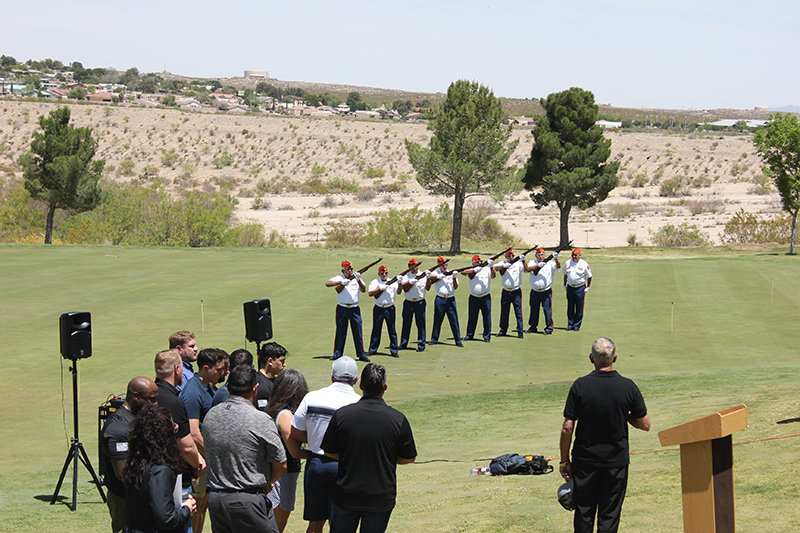 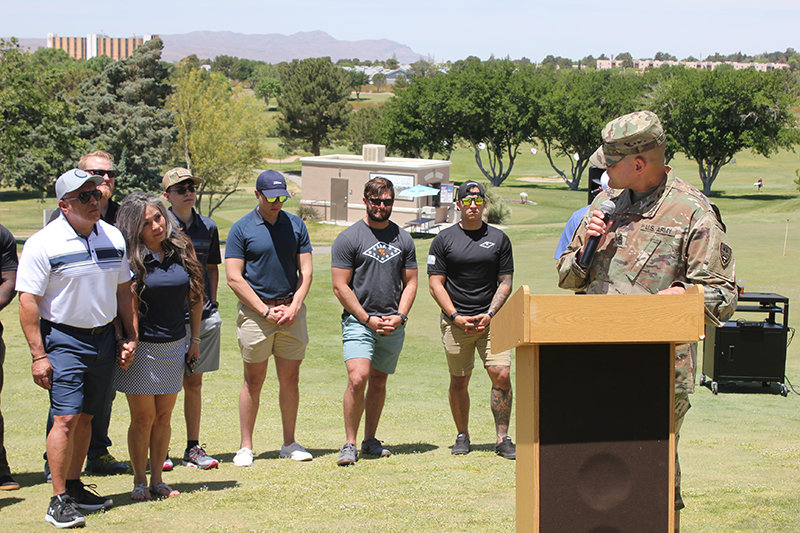 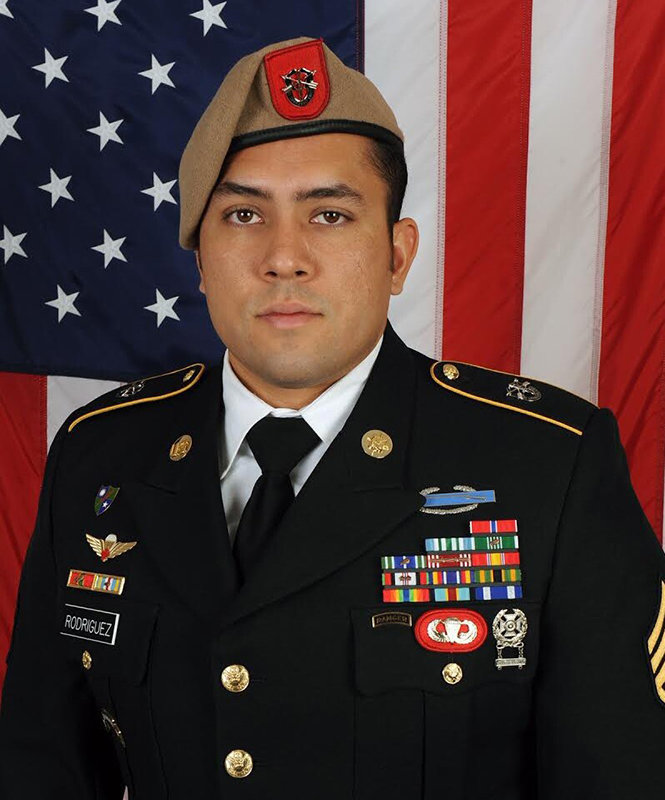 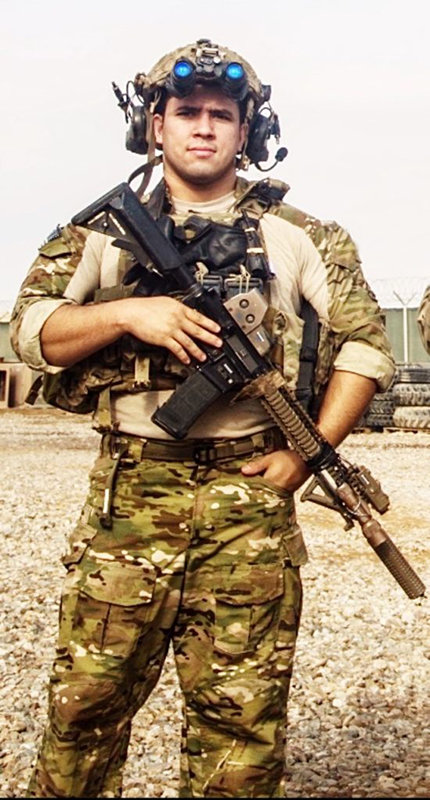 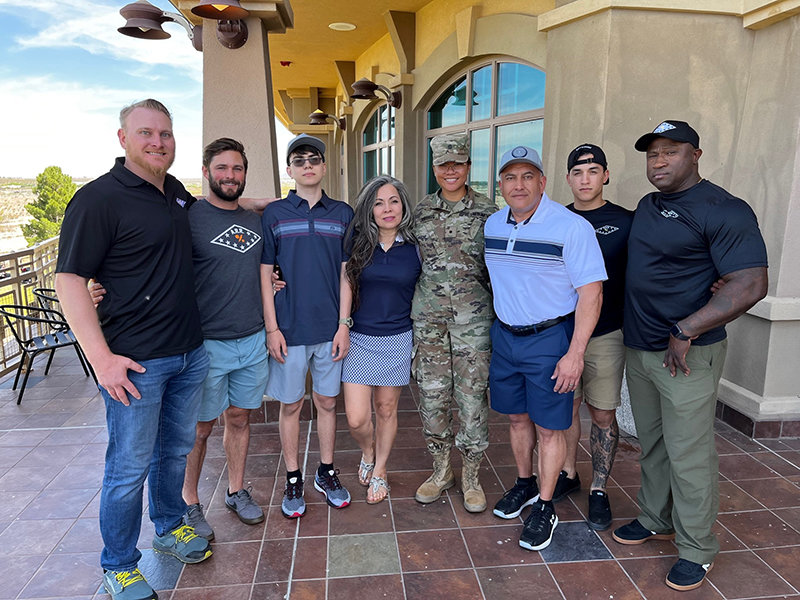 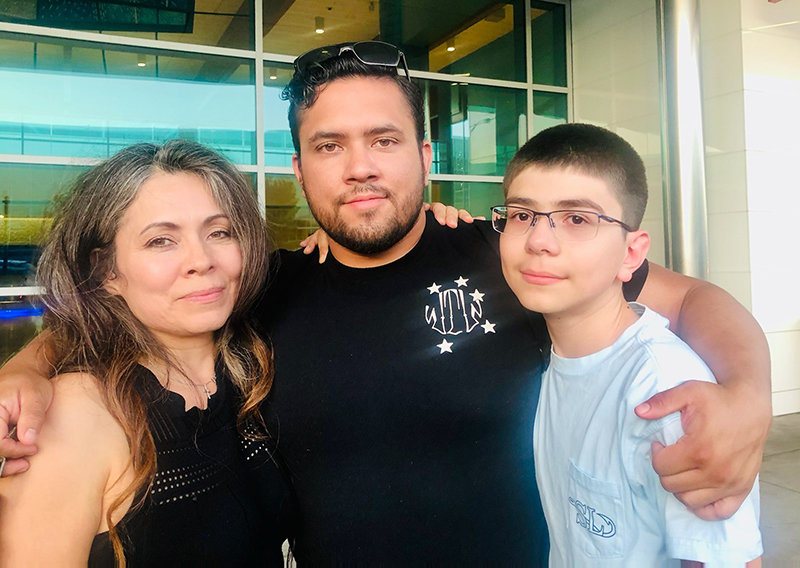 The New Mexico State University Golf Course was a beehive of activity Friday, May 6, with an inordinate number of people dressed in military uniforms, camouflage, khaki or other clothes referencing the U.S. military.

It was fitting attire for the first Antonio Rey “Rod” Rodriguez Golf Tournament.

One hundred golfers, representing 25 teams, showed up for the event, raising more than $40,000 for the Antonio Rey Rodriguez Foundation, www.arrfoundation.org.

His surviving family, working hard to keep Rod’s legacy alive, established both an NMSU scholarship and a foundation to fund it, in hopes of making good things come from their tragedy. Rod’s mother, Lupe Rodriguez-Jaramillo, was determined the scholarship be created in the same year her son died and, indeed, it was established in late 2020.

Still a new scholarship, it has already benefited three recipients. The latest, Cadet Rita Jennings, accepted a check for $2,667 Friday, which will help her complete her senior year at NMSU, where she’s also in the Army ROTC program. Funds raised from Friday’s tournament should mean more recipients and larger scholarships going forward.

It’s still difficult for Rod’s mother to talk about her son, who she calls Antonio or her “little boy.” When she does talk about him, it’s naturally in glowing terms, but even a mother can be overwhelmed by all the great things she hears her son did during his life.

Rod would give the shirt off his back for his friends, and often did. He also gave space in his home, wherever he was living, for friends and fellow soldiers who needed a place to stay.

Lupe and her younger son, Christopher, now 16, receive calls from Rod’s fellow Rangers on a regular basis, a demonstration of the care the soldiers have for each other and their families.

“Every single day a Ranger talks to me or Christopher,” she said.

“We have Rangers on our foundation board, and they say they are so grateful, but I’m so grateful for them,” Lupe said. “You always hope your children will find something they love to do. Antonio loved his job. He said he couldn’t imagine doing anything else. And he found another home in his brothers.”

‘He can still help’

Lupe, who grew up just north of Las Cruces in San Isidro, also went to Mayfield, graduating in 1989. Although she and her husband, Javier Jaramillo, now live in North Carolina with Christopher, they believed the first golf tournament should take place in Rod’s hometown.

To help coordinate the tournament, the family came back to Las Cruces a week ahead of time.

At one point, during a planning meeting at the NMSU clubhouse, Lupe looked out past the golf course, which offers a beautiful view of the Mesilla Valley. She gazed at the city and the horizon beyond.

“It’s like my little boy is still here,” she said, with a faraway look. “He can still help.”

Lupe and Javier marveled at all the Las Crucens who had come together to help bring the scholarship, the foundation and the tournament to fruition.

“We thought we could do it ourselves, but we need all these people,” Javier said.

“It’s coming through all of us,” Lupe said of the progress. “But you see Antonio in it.”

Immediately after Rod’s death, one of the Rangers started a GoFundMe account to help the family.

“The donors were people I don’t even know,” Lupe said. “Rangers and others. Rangers might give $25 and I know they can’t really afford to do that. Or they might give $37.50 (to represent the 3rd Battalion, 75th Ranger Regiment).

“But I couldn’t use that money for me,” Lupe said.

And so it became the seed for the scholarship and the foundation.

‘No way we can repay’

With the foundation still in its infancy, the family is hopeful it can grow to help many others.

The first fruit of the foundation is to channel funds into the NMSU scholarship.

They’d like the foundation to focus on special operations military - Rangers, Green Berets, Navy SEALs, and others – to provide support for them and their families in times of need.

“They definitely don’t do that job for money,” Lupe said. “There’s no way we can repay what they’ve done for us. It was my son today, but tomorrow, it’s going to be another mother. We see the need and we wanted to help.”

Anyone else can help, too, she said, by visiting www.arrfoundation.org to learn how.