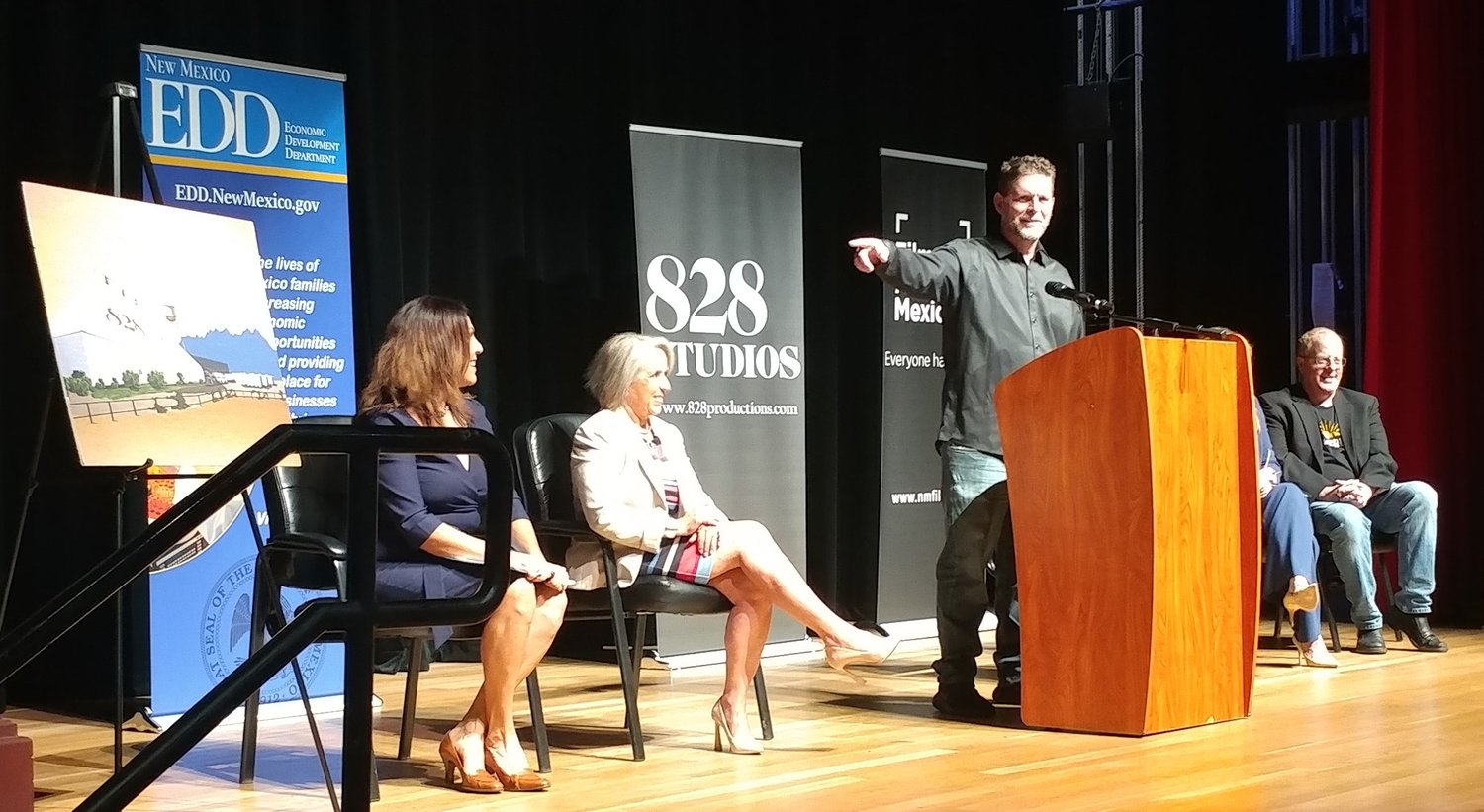 828 Productions CEO and founder Todd Lundbohm points to an artist’s rendering of the film studio he will bring to Las Cruces. With him on stage at the Rio Grande Theatre during the announcement were, left to right, Las Cruces Mayor Pro Tempore Kasandra Gandara, Gov. Michelle Lujan Grisham and state Sen. Jeff Steinborn. On the other side of the podium is New Mexico Economic Development Dept. Sec. Alicia J. Keyes.
Bulletin photo by Mike Cook 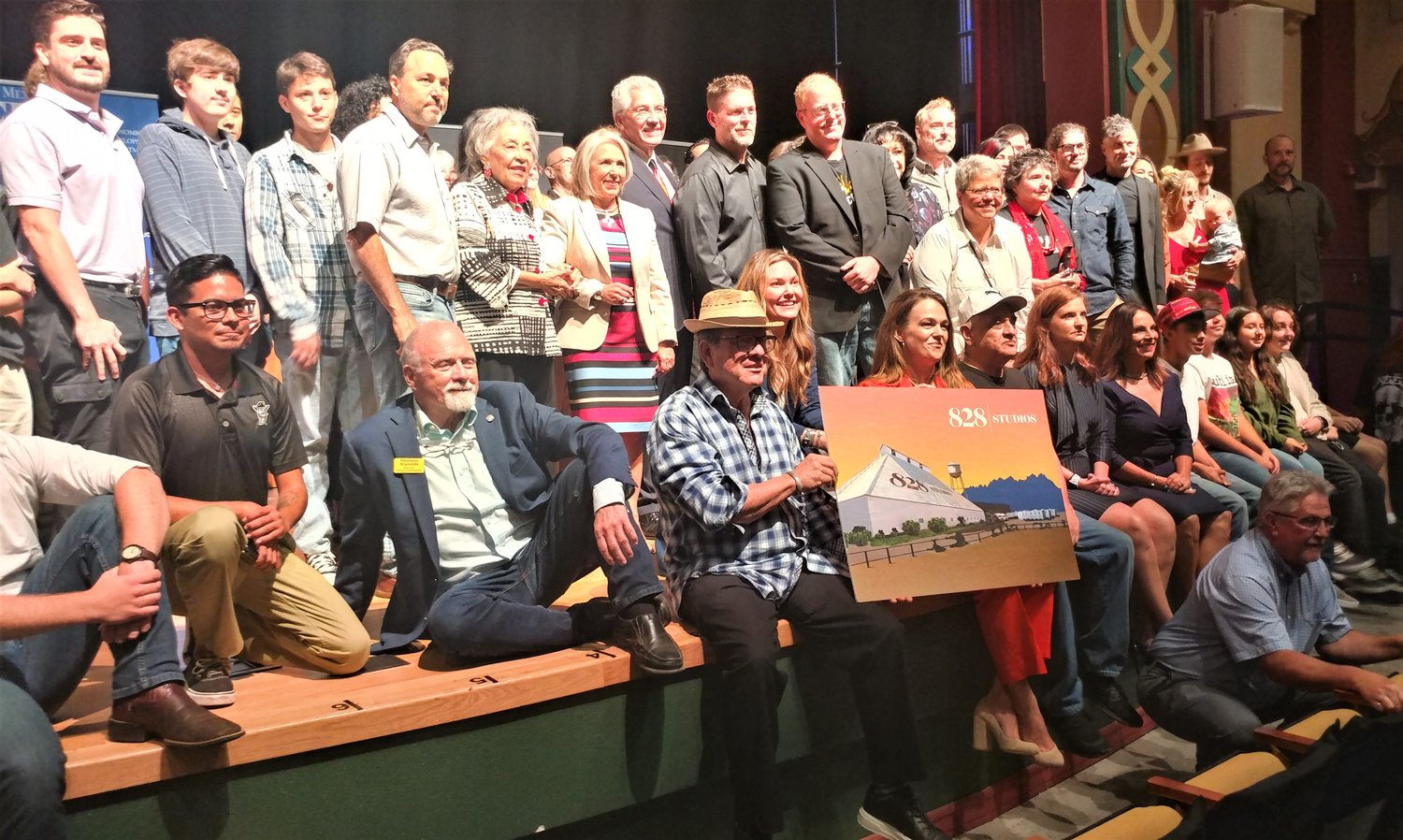 “We have found our partner,” said state Sen. Jeff Steinborn, D-Doña Ana. “It is definitely an incredible day for Las Cruces. This is a very big deal for our community. We have dreamed of this day for a long time,” said Steinborn, who is president of Film Las Cruces, the nonprofit he helped create that brings film and television production to Las Cruces and Doña Ana County.

Lujan Grisham said Lundbohm and 828 have pledged to create 100 jobs in Las Cruces, and the state of New Mexico will support the new studio with $3 million in Local Economic Development Act (LEDA) funds.

The studio will bring $350 million in direct spending to New Mexico, said New Mexico Economic Development Dept. Sec. Alicia J. Keyes, referring to the film and television production revenue it is expected to generate during the next 10 years.

Lundbohm said he came to Las Cruces for the first time about a year ago to make a movie. His conversations with local filmmaker Rob Dean and his first impressions of Las Cruces – “there was just this community where everybody was happy” – convinced Lundbohm Las Cruces was the place to open his studio, which will be “a house for artists to tell their story,” Lundbohm said.

“It started to feel like home instantly,” he said. “Wherever you go, you see those mountains (the Organs) and it anchors you. This is the place to do it,” he said. “Let’s go make some movies.”

“We look forward to working with you,” Mayor Pro Tempore Kasandra Gandara told Lundbohm during his announcement, which took place at the Rio Grande Theatre.

“This is the tipping point for the film industry in southern New Mexico,” said Las Cruces Film Liaison Jon Sepp. “Our work is far from over, but we are continuing to make great strides in cementing this industry into our local economy.”

Steinborn said state Rep. Nathan Small, D-Doña Ana, also deserves credit for the work he did as a member of the Las Cruces City Council on the development plan for Amador Proximo, the area west of Downtown Las Cruces that includes an iconic water tower and cotton gins, where Lundbohm plans to build the studio.

The studio is “the beginning of a whole new, exciting journey in film” for Las Cruces, Steinborn said.

A news release from the governor’s office said the City of Las Cruces is considering an additional $900,000 in LEDA funding for the project, in addition to the $2.8 million the city has set aside for film infrastructure.

828 Productions plans to invest $75 million to build the studio and create a 20-acre back lot, the news release said.

“828 began ramping up its production efforts in May 2022, filling key positions and purchasing a 7,500-square foot office building in downtown Las Cruces for training, post-production, and visual effects work,” the news release said.

The company has pledged to shoot its first production in the new Las Cruces studio before the end of 2022.

With the LEDA agreement and other guarantees from the company to invest in workforce training, 828 Productions is set to become New Mexico’s third film partner, joining Netflix and NBCUniversal, the governor’s office said.

Romantic getaway just a drive away