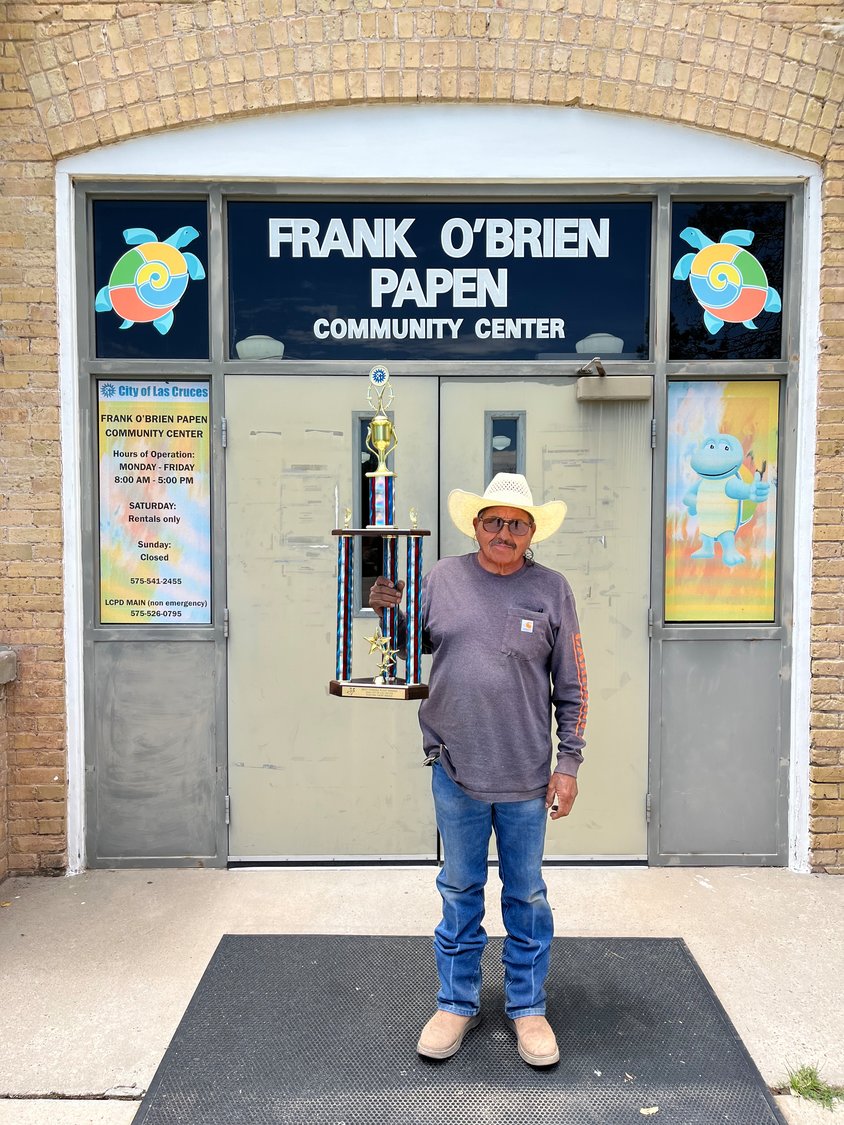 Nick Hernandez of Hernandez Plumbing, Heating and Cooling with one of his many parade trophies. 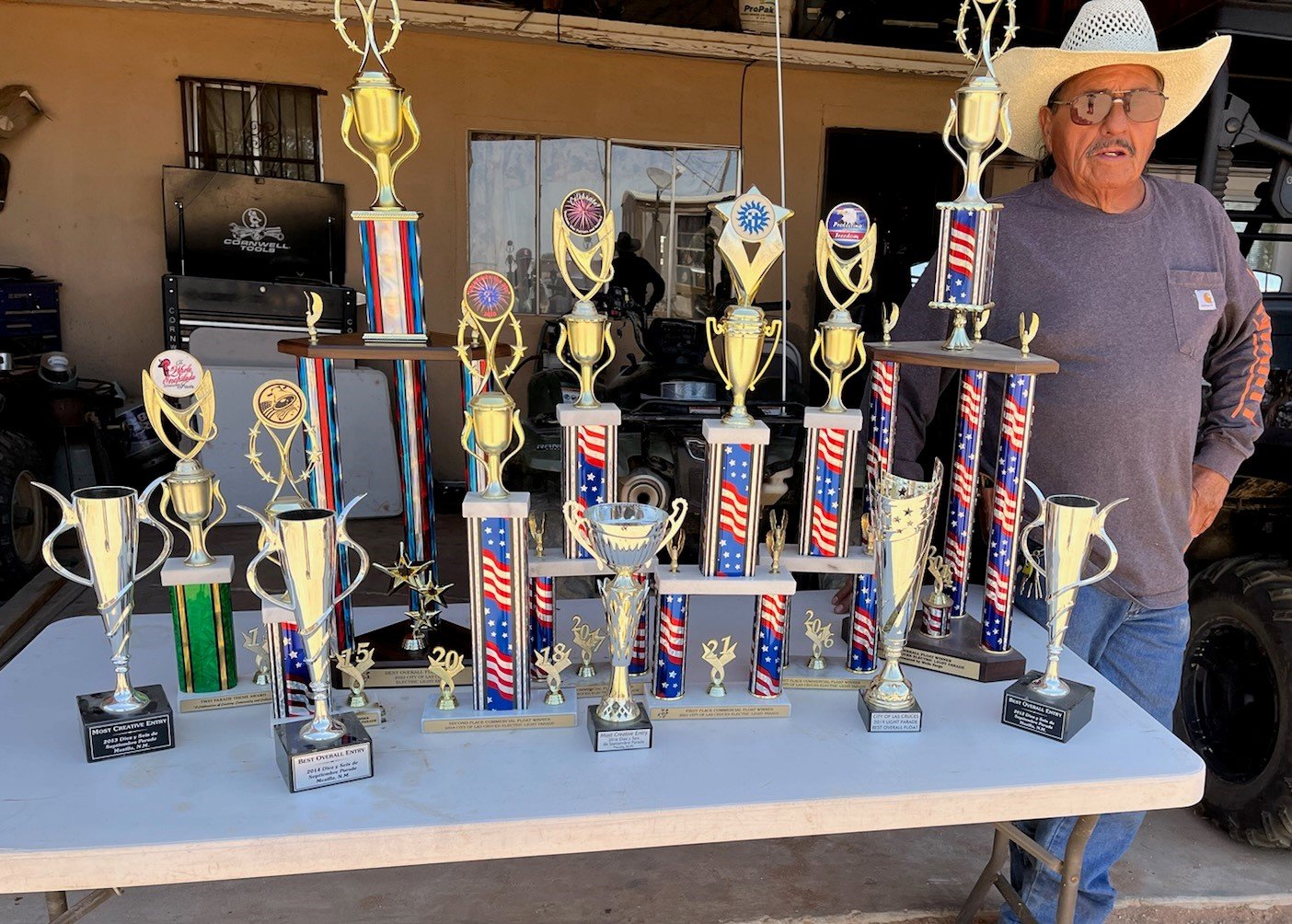 Nick Hernandez with some of the many parade float trophies he has won in the past 20 years.

Hernandez Plumbing’s entry in the 2022 Electric Light Parade winning entry in daylight, with its trophy from the City of Las Cruces for best overall float. 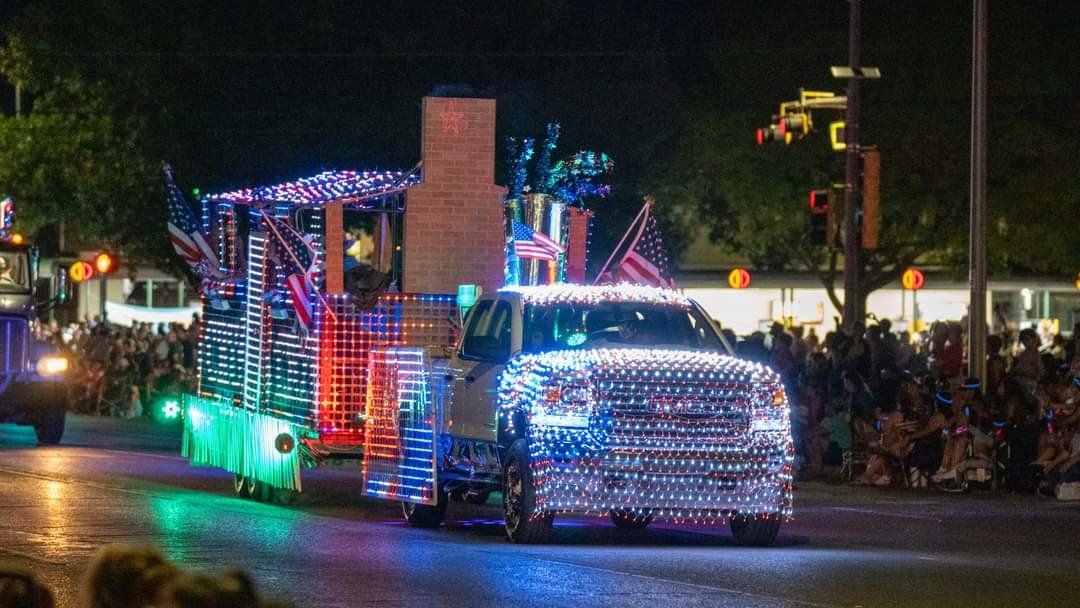 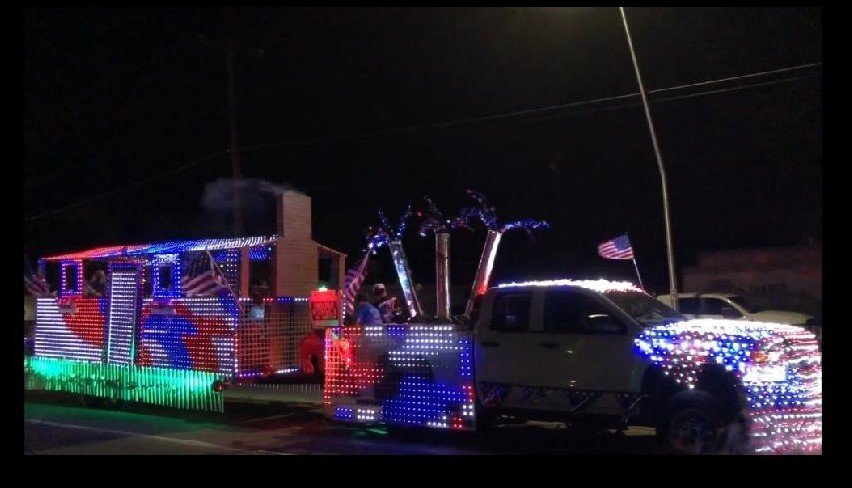 Hernandez Plumbing’s best overall float winning entry in the 2022 City of Las Cruces Electric Light Parade. Owner Nick Hernandez thanked Steve Misquez from “Cruces Christmas” for the lighting of the float and “Twilight Entertainment” for the music.
Previous Next
Posted Thursday, August 4, 2022 11:21 am
By Mike Cook

Hernandez Plumbing, Heating and Cooling’s entry was the best overall float winner in this year’s City of Las Cruces Electric Light Parade. Last year, it won best commercial float in that parade. Hernandez and his team have also won many trophies in the annual Diez y Seis de Septiembre parade in Mesilla and took first place in the last Whole Enchilada Fiesta parade in 2014. He also had a float at the grand opening of the Vado Speedway in 2019.

“It’s a lot of work,” said Hernandez, a Las Cruces native. “We’ve been doing it a long time. It’s enjoyable.”

Hernandez has used the same trailer for all his floats. He built it for a local band to use in a parade a couple of decades ago and even pulled it for them for a year or two before making his own company float and beginning the long tradition of winning the biggest trophies.

The building takes place in a barn Hernandez owns, and every float includes some of the PVC pipe he uses in his plumbing business.

The Hernandez trophy-winning parade float team includes friends and family like his 17-year-old grandson, Nicholas, and Hernandez’s friend, Steve Misquez. Misquez does a lot of the work with the lights for the entries in the Electric Light Parade, Hernandez said. That is a time-consuming effort, he said, because each bulb must be installed by hand, and getting them right is critical for the Electric Light Parade, which is, of course, held at night.

“There is a lot of creativity,” Hernandez said. “Every single one is a different experience. They’re all my favorite.”

Hernandez said about a half-dozen people work on each float, starting about a month before the parade and spending 50-60 hours getting the float in award-winning form.

“When I see the spectacular effort and hard work that goes into these patriotic works of lighted, living art, I am blown away,” said City of Las Cruces Recreation Services Supervisor Crystal Copper. “The creativity never ceases to amaze me. Hernandez Plumbing’s dedication to bringing the best float for all the community to behold is beyond commendable, it’s trophy-tastic! And their wall of trophies says it all. It says, WINNERS!”

Hernandez Plumbing has often traded the top spot in the Electric Light Parade with Zia Natural Gas Company, which won best commercial entry in this year’s parade and has won best overall float trophies in the past.

It’s a friendly rivalry between two companies that often work together in the business world, Hernandez said, giving the winner bragging rights.