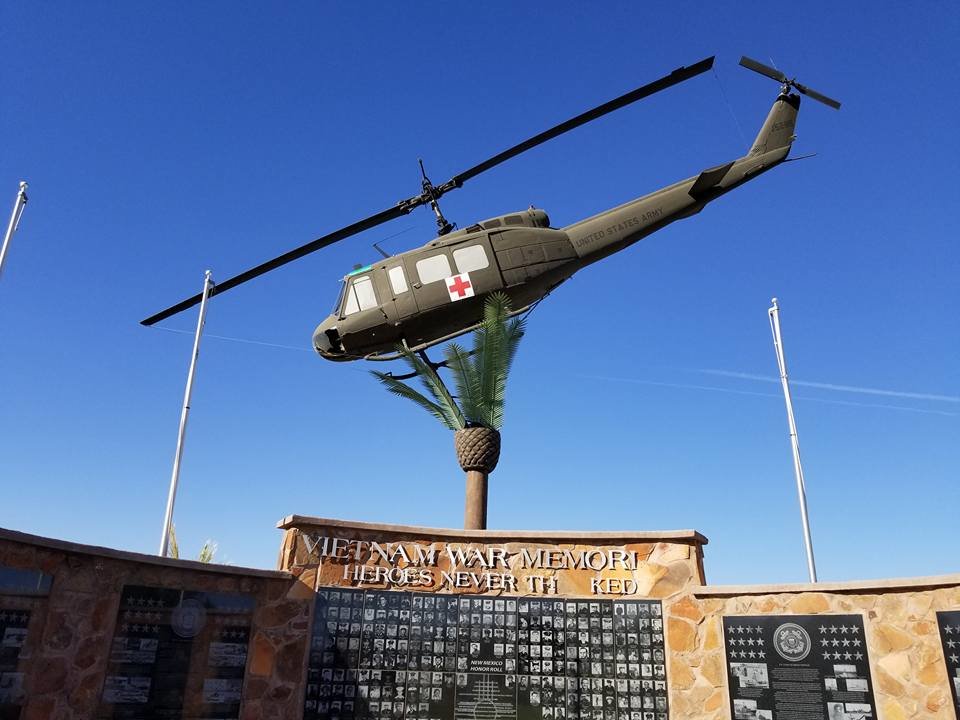 The small, simple chapel at the Angel Fire Memorial used to be locked nightly, until one morning the caretaker found a note written on scrap wood: “Why did you lock me out, when I needed to come in?”

Since then, the chapel has remained unlocked.

That question, though, could be a metaphor for all Vietnam veterans: “When I returned from battle, why did you shut me out and scorn me, when I needed to come home, and to feel at home?”

It’s been almost 50 years since the end of the Vietnam War. For those too young to remember, America’s presence helping the South Vietnamese fight the North Vietnamese was controversial. From the mid-1960s through the war’s end in 1975, there were frequent protests all over the country against our being in the war. At the same time, there were many Americans who believed it was the right thing to do, battling communism. The debate deeply divided our nation.

The worst result was the horrible reception for American military members when they came back. They were shunned, spat on, called hurtful names and, in many cases, denied jobs. Many were physically maimed in the war. Probably all of them dealt with mental trauma. These were young men who, for the most part, didn’t ask to be there. The military draft was in place, and when your number was up, it was up. The war pulled disproportionately from America’s poor, uneducated and minority populations.

Vietnam veterans got no hero’s welcome like their predecessors who fought in World War II. Because of lessons learned post-Vietnam, Americans do a better job of supporting our returning veterans now. The Vietnam veterans, however, were stuck in the middle. And they’re still dealing with it.

“Welcome Home” is a ironic for Las Crucen veterans Robert Galaz and Rudy Gutierrez. Their tours in Vietnam were the only times in their lives they were NOT home in Las Cruces.

Galaz and Gutierrez were both born in Las Cruces, growing up a few blocks from each other in one of the oldest sections in the city, often known as “Chiva Town.” Galaz lived on Kansas Avenue and Gutierrez on Texas Avenue. Galaz’s first job was working as a shoeshine boy on Main Street, in front of Vic’s Barber Shop.

Both graduated from Las Cruces High School, Gutierrez in 1966 and Galaz in 1970. Each enlisted before their draft numbers came up. Galaz signed up in the Army. Gutierrez joined the Marines, which peeved his father, who had been in the Army during the Korean War. Galaz’s family also served. His grandfather was in World War I, and his father and uncle were both in World War II. And one of Galaz’s sons, Dominic, is currently in the Navy.

Galaz was part of the 101st Airborne Infantry Division. While he did not parachute out of planes, he did rappel out of helicopters.

He made his way fine, however, through swamps that never got much more than waist deep. He also made it through a terrifying ambush one day in the jungle. “They were everywhere,” Gutierrez remembered. But only he and one other Marine from a unit of 200 men made it back to camp. Gutierrez, who spent a month in the hospital, never knew anything about the other 198.

Veronica (Ronnie) Galaz, Robert’s wife of 50 years, recalled the day Robert came back to the States after his duty in Vietnam.

She was at the airport in El Paso, anxiously waiting for his plane. Again, despite Robert’s Purple Heart, Bronze Star and other medals and commendations, there was no hero’s welcome.

“It was only his mom and dad and me and his sisters,” Ronnie said. “It was very sad.”

Among his other honors, Gutierrez also earned a Purple Heart, but it took 41 years to receive it. After years of delays and paperwork issues, he was finally presented his Purple Heart in a ceremony in Las Cruces in 2009.

Despite disappointments, neither Gutierrez or Galaz complain or harbor any ill will. Each have dealt with health issues from frequent exposure in combat to Agent Orange, which no one understood at the time and often looked as innocent as dewfall. They simply came back home to Las Cruces and went about the business of life, taking care of work and family.

Galaz and Ronnie were junior high school sweethearts, having met in ninth grade typing class at Court Junior High, the building now occupied by Alma d’Arte charter school. They got married the day after Christmas, 1971, when Robert was home on leave. They wanted to wed at San Albino Church in Mesilla, but it was unavailable, so the ceremony was at St. Genevieve’s.

Robert earned a mechanic’s certificate at Doña Ana Community College and worked for 32 years at White Sands Missile Range. He and Ronnie raised four boys. Robert Galaz Jr. is about to retire after 25 years with the Las Cruces Fire Department. Gabe Galaz is also with LCFD, serving as battalion chief at the training center. Adrian Galaz is principal at Holy Cross Catholic School and recently completed his fifth marathon. The youngest, Dominic Galaz, is a Lt. JG in the U.S. Navy, currently stationed in Seattle.

“I didn’t push my boys into the service, in fact I tried to talk them out of it, but they all wound up in some kind of uniform,” Robert said.

Gutierrez met his wife, Margarita, when he first returned from the service and worked for the city as a meter reader. They had four children: Rudy Jr., Claudia, Oralia and Javier, and later adopted two more, Luis and Selena. Perhaps even more difficult than raising children, Rudy and Margarita raised a business, Los Compas restaurants.

Not long after returning from Vietnam, Rudy signed on with the National Guard, where he worked as a cook for 18 years. He and Margarita initially joined forces in the restaurant with Ramon Carnero, who owned Ramon’s Garage and was Rudy’s compadre, or “compa.” Hence the name “Los Compas.” They eventually bought out Carnero and have grown the business into three separate restaurants in Las Cruces.

Despite their accomplishments, coming back was not always a picnic.

“We had our struggles,” Ronnie said. “But we got through it, with help from our faith in God.”

To see Robert and Rudy today, in their 70s, is to see two heroes. They seem humble as elders, each walking with a cane illustrated with military service insignia, and each graciously accepting people’s recognitions: “Thank you for your service.”

What they did in Vietnam was brave, courageous and patriotic. But I see them as heroes more for what they’ve done since then, right here in Las Cruces, raising wonderful families and creating happy opportunities for many people. If you doubt that, I invite you to join me some time at Los Compas for a steak picado burrito.