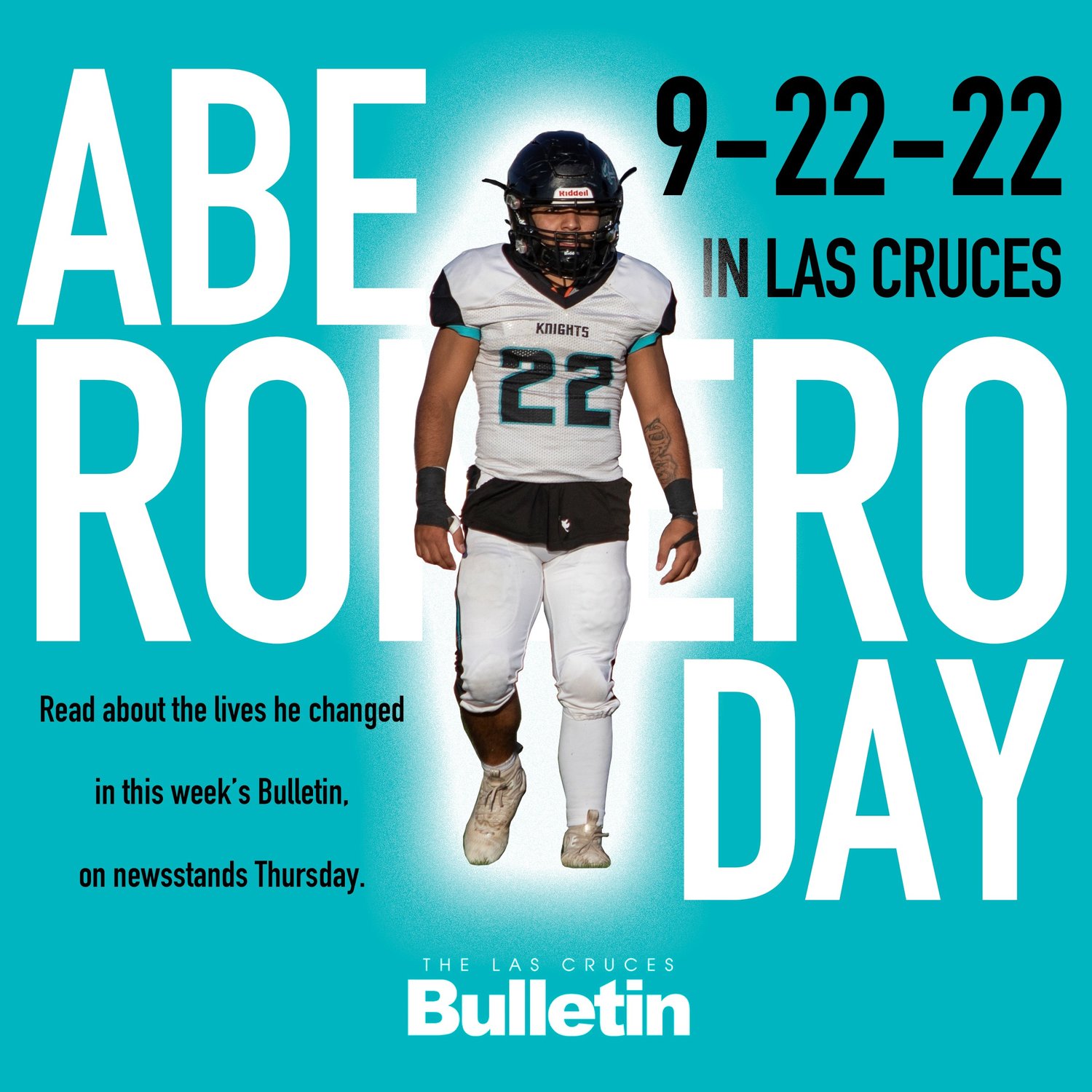 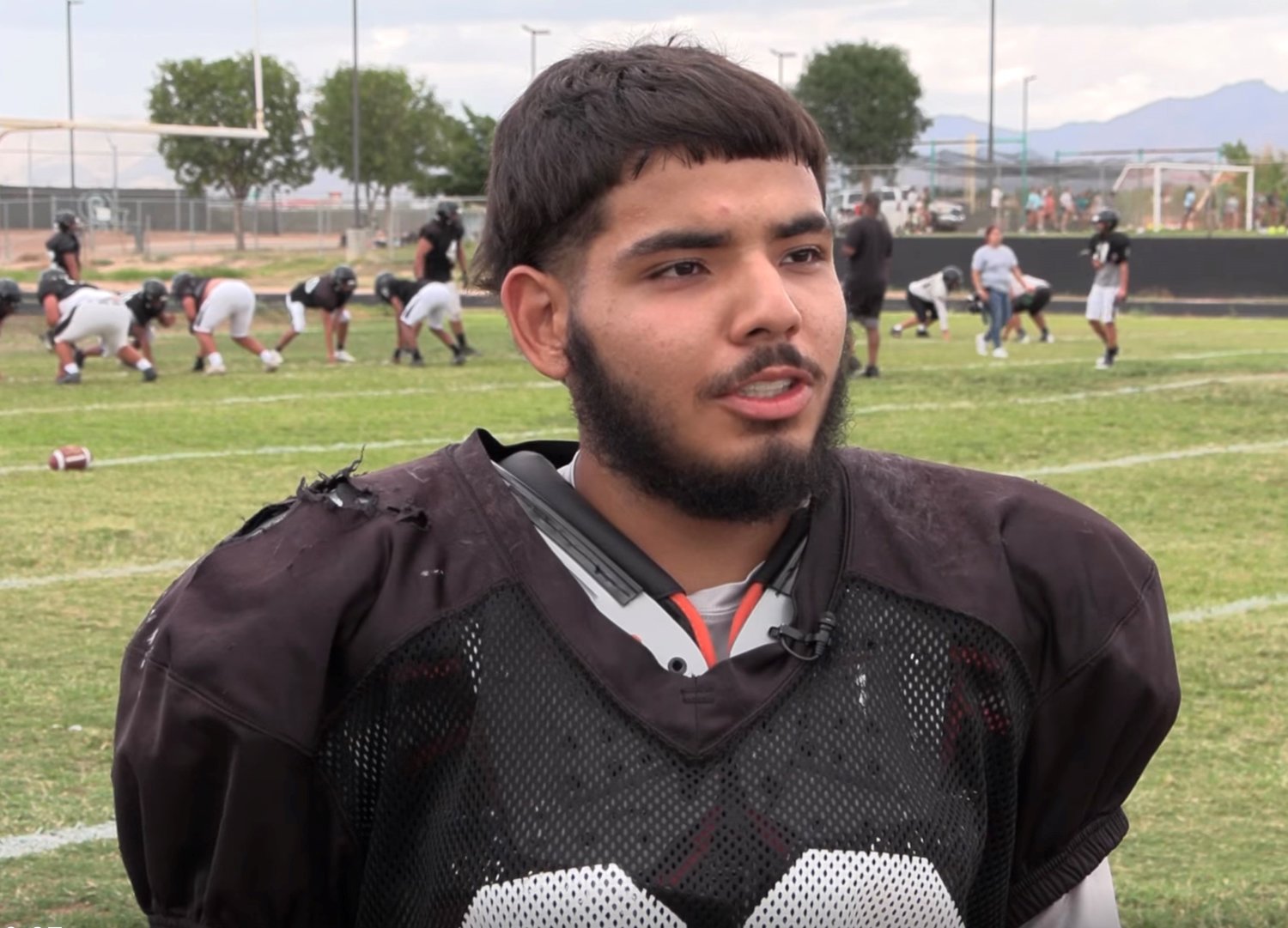 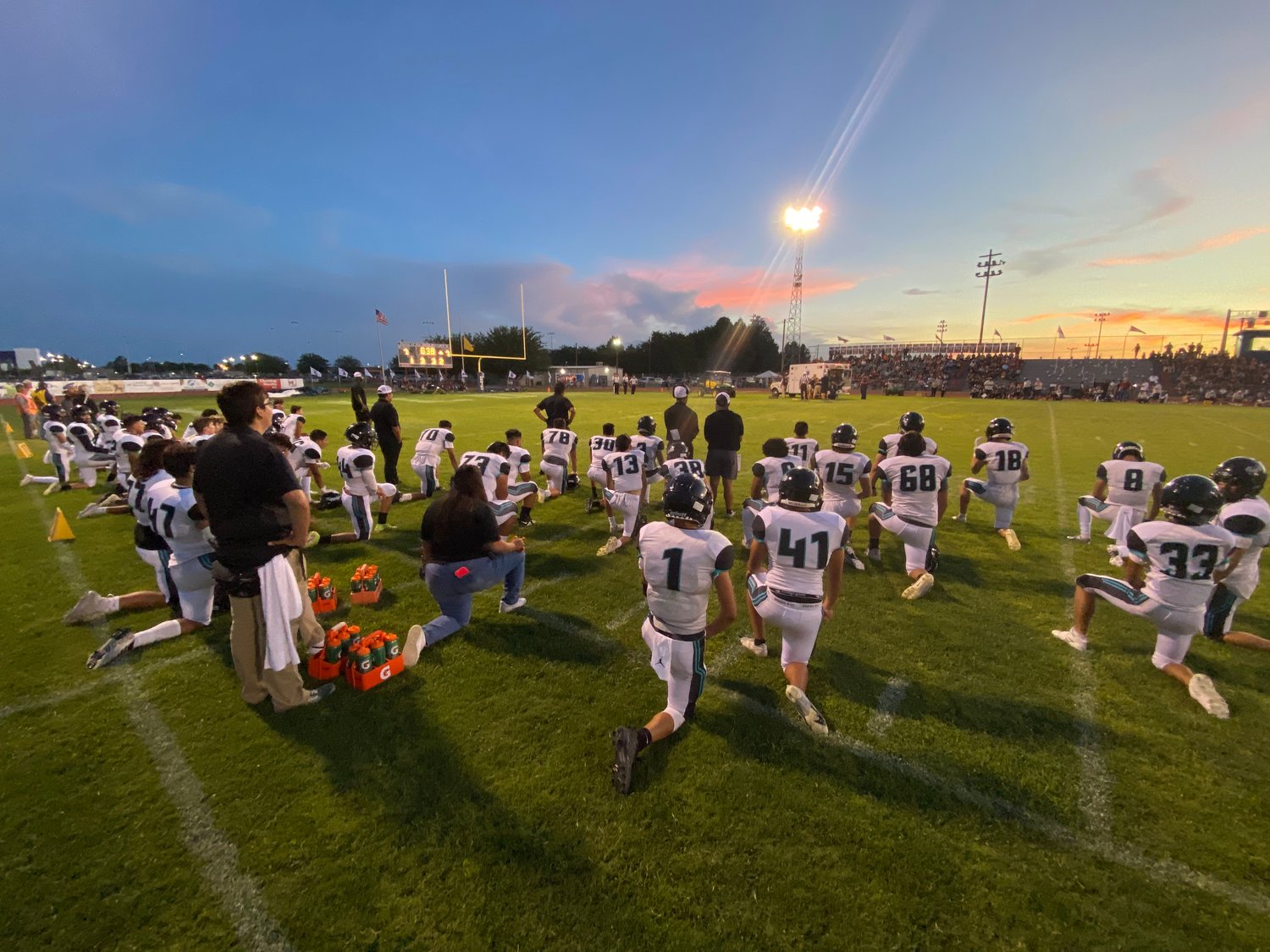 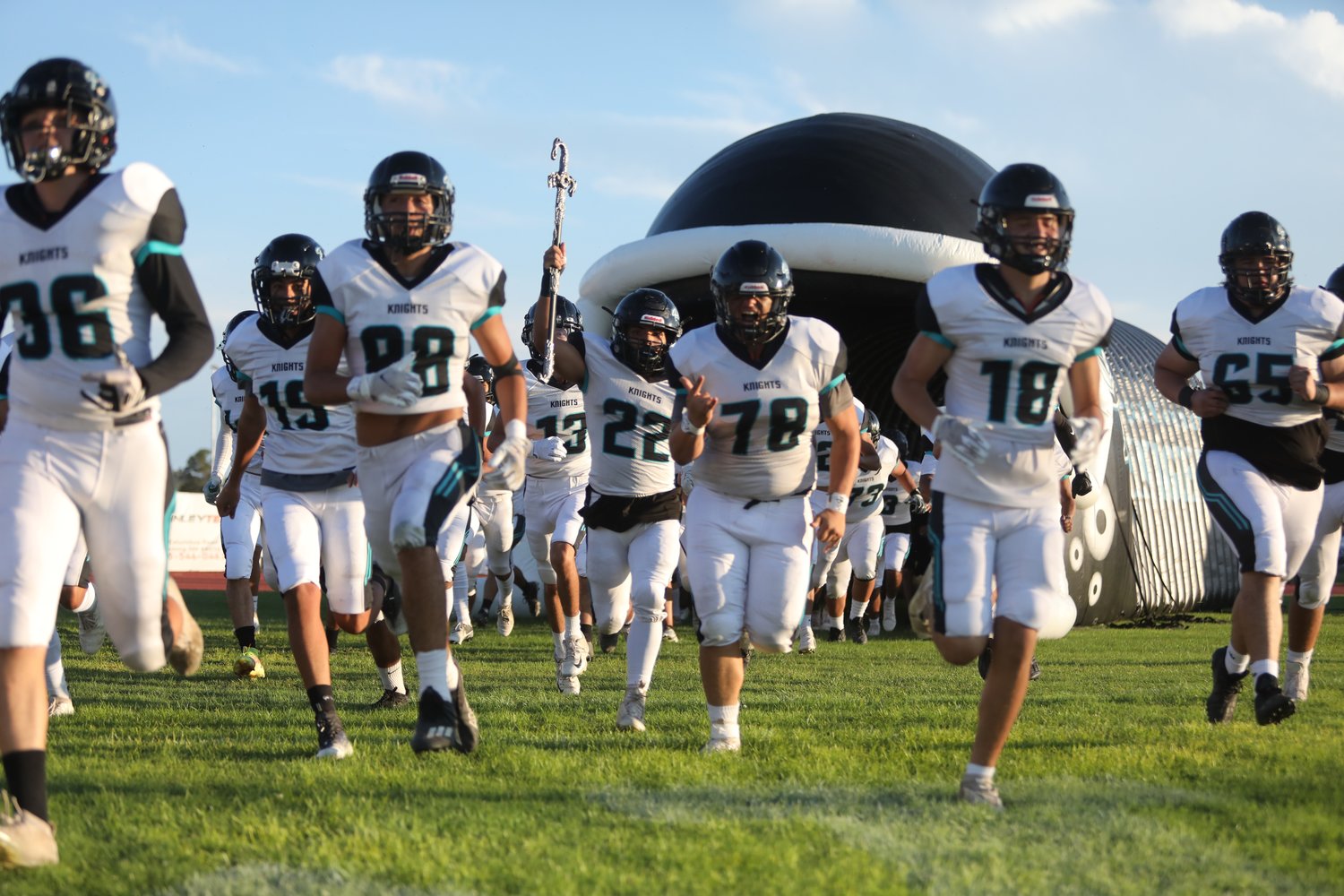 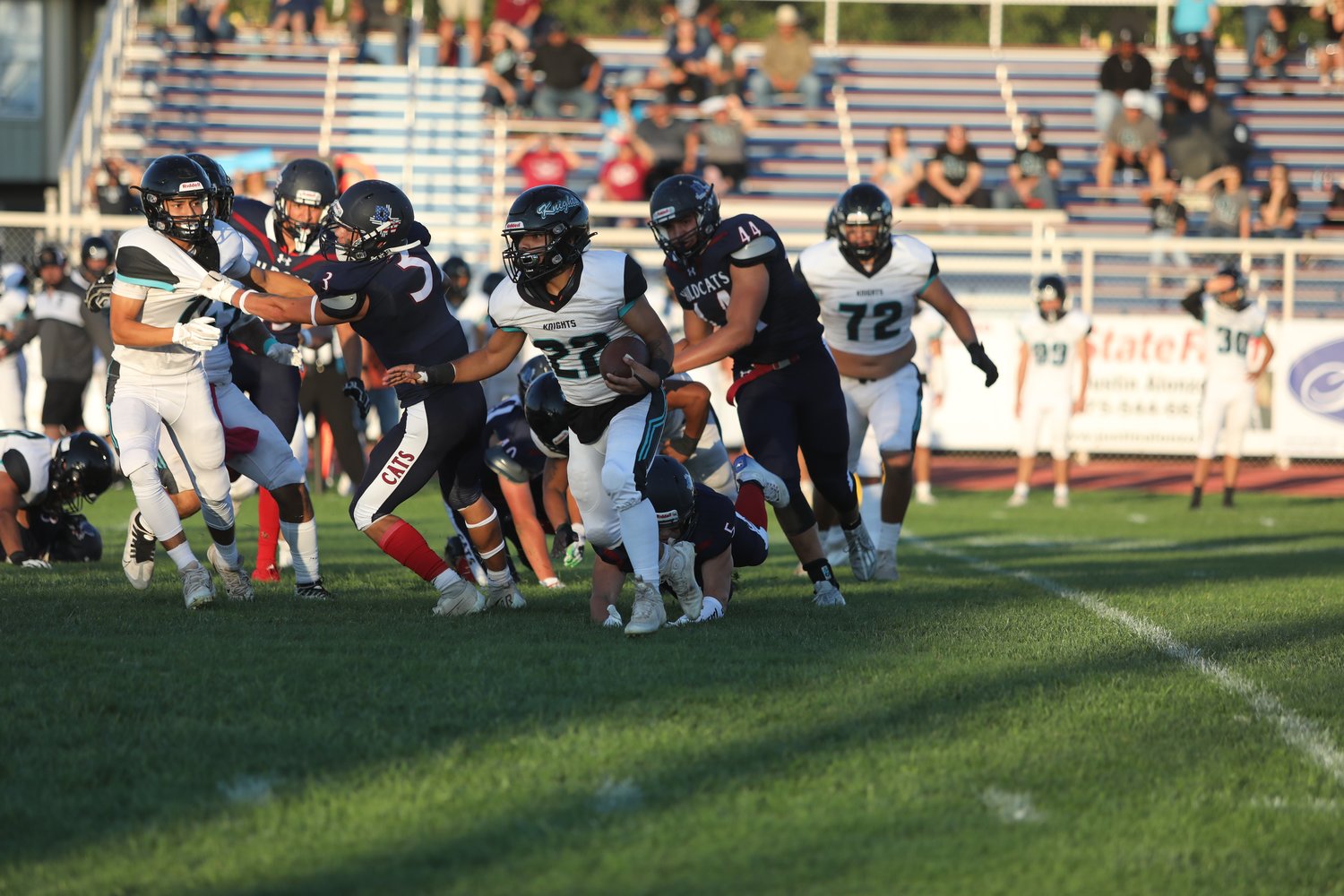 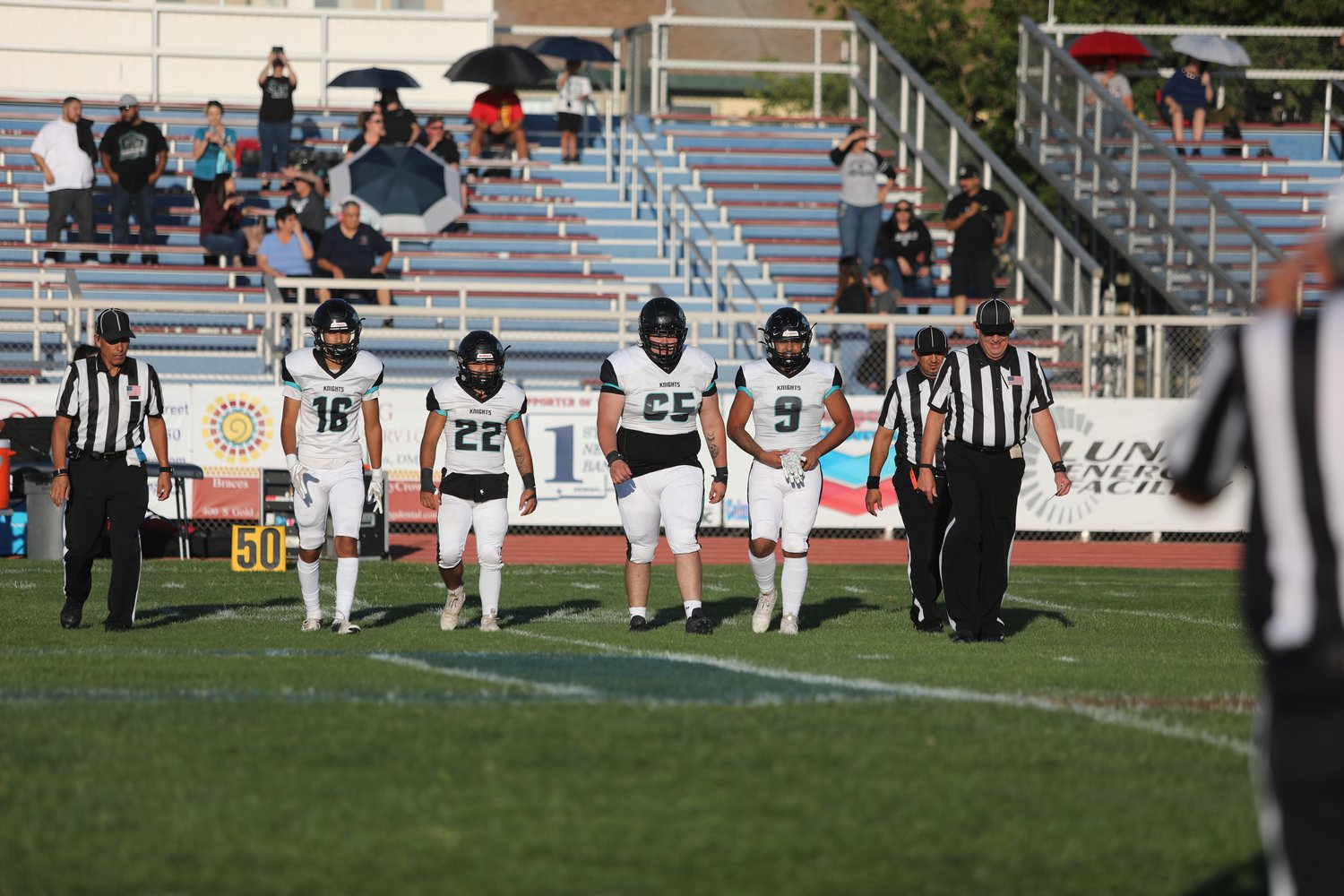 Though small in stature, No. 22 was big in leadership and respect from his team, which was why Romero earned the status of captain for the Knights football team.
Photo by Jason K. Watkins
Previous Next
Posted Wednesday, September 21, 2022 9:30 pm
Services planned for weekend

Following are the services for Abraham Y. Romero.

Abe will be laid to rest following the services at St. Joseph’s Cemetery, 100 S. Espina St.

Those planning to view the procession are asked to do so in a manner that is respectful to Romero’s family and the many businesses along the route. Mourners should remain on public sidewalks and refrain from parking or standing on Main Street and Solano Drive. Motorists should avoid blocking cross-streets and private driveways that limit access to area businesses.

Those planning to view the procession are asked to do so in a manner that is respectful to Romero’s family and the many businesses along the route. Mourners should remain on public sidewalks and refrain from parking or standing on Main Street and Solano Drive. Motorists should avoid blocking cross-streets and private driveways that limit access to area businesses.

I was on the sideline when Abraham Romero was injured. Photographing the game for local newspapers, I saw every play on the field up close that night. By the third quarter, I knew people's lives had changed.

I've been photographing football games for almost 32 years, and I don't remember ever seeing so many injuries. Half a dozen players required some kind of medical attention that night, and at one point, three were in the Deming emergency room at the same time.

When Romero, a 17-year-old senior at Organ Mountain High School, first got tackled by a couple of Deming defensive players, he got right up.

"It didn't seem that bad," Wildcat junior Aiden Jaquez told me after the game. "There were a couple of us who hit him, but we don't know who hit him before he collapsed."

One Wildcat player said Romero may have taken a knee to the helmet, but no one could pinpoint the specific impact or the player who did it. When he collapsed on the field a couple of plays later, his teammates still didn't seem worried. They took a knee as the ambulance drove up next to him, and then the game resumed. Not long after, a helicopter passed over the stadium, and whispers of "Abe" started spreading down Organ Mountain's sideline. "This is for Abe," they started saying on each play, or "do it for Abe."

The helicopter passed right back over the stadium sometime before the end of the game, and it became clear something was wrong. "That's Abe!" the players started shouting. "It's Abe!" They took a knee again as their team captain flew overhead on his way to El Paso.

Abe, a 5-foot-3, 155-pound powerhouse linebacker who was called the heart of the team by many players, was placed in a medically induced coma that Friday night, Aug. 28. He passed away Sunday, Sept. 18, with his mother, Elizabeth Alonzo, by his side.

By comparison, Abe's injury didn't seem like the worst one on the field that night. In the first quarter, Deming kicker Fabian Reyna's hand got smashed by a couple of Organ Mountain players, and he had to leave the game temporarily. Then, two Knights landed on Wildcat junior Adrian "A.J." Flores' elbow and badly broke it. He had to have surgery the following week, and he'll lose about eight weeks of games.

The seemingly worst hit of the game came in the third quarter against the Wildcats’ sophomore quarterback Ryan Alfaro. Knights senior Ben Cruz, a 6-foot, 160-pound tackle, took advantage of a quarterback carry and thin coverage by crashing into "Ryno" in the most violent tackle I've ever seen.

"It was pretty scary for a moment there," Ryno said. Or terrifying, his mom would say. Her bright-eyed, 5-foot-10, 150-pound son was knocked out cold.

"We knew it was bad," she said the day after the game. "We were on the opposite side at the top of the stadium and it looked terrible."

From where I stood, three feet away, I believed I had just seen lives change. Two wide-eyed EMTs rushed past me, all of us expecting the worst. I turned and I sat down, almost sick. The stadium was on its feet and the field was on its knees for around 10 minutes until, slowly, Ryan got up and walked off the field. I was relieved, but I couldn't stop thinking about what it would feel like to see your child get hurt.

Melanie Alfaro knows how it feels. Not only is she Ryan's mom, she is a New Mexico State University Aggie Hall of Fame basketball player who graduated in 2002 and is raising the next generation of star athletes. She is also an acclaimed educator in Deming. She says she thanks God Ryno woke up the day after the game feeling better; she kept him on the sidelines for three weeks, just to be safe, and when he made his return to the field in Belen Sept. 16, he led his team to a 51-20 victory.

"As a mom, you don't ever want to see any harm come to any child on that field, regardless of whether they're wearing the same colors," she told me. "I'm sure most people feel like that. I just hope the family knows we are with them."

Parents across southern New Mexico might be asking questions right now. How safe is football? How do you stop a child from participating in it, especially if they're good? Why does one family escape tragedy and another doesn't?

'This is for Abe'

Quarterback Logan Tarango, a junior at OMHS and one of Abe's best friends, is taking it hard.

"I feel empty," he said. "It's not the same out there with him. I can hear him in my head, too, telling me what to watch out for."

He dedicated the season to Romero on the field that night, when his condition was unknown.

"They grew up together," John Tarango, Logan's dad, said later. "Abe is over here all the time. He comes every Sunday and gets his haircut.

"[Fabian] Lozoya and the rest of the seniors, it's their team," John said. "Logan might call the cadence on the offensive side of the ball, but he knows it’s a senior-led group. He is doing the best he can to make sure the team has a chance at making the playoffs."

The Knights' motto is "Protect the family," and it has taken on new meaning in grief. Tarango says he and his teammates are united, and they are going to "continue to be there as Knights for Abe's family." Tarango and senior middle linebacker Isaiah Dunn had Knight helmets and the number 22 tattooed on their forearms Sept. 17, then they visited Abe in the hospital.

"He was a captain on both sides of the ball for us," Logan said. "At the beginning of the season, he made a promise to my dad to keep me safe and to keep me calm, cool, and collected. He is our twelfth man out there now. He is gonna look out for us out there."

A candlelight vigil was held Sunday night at OMHS where hundreds of balloons were released in the air, and other memorial events and tributes are being planned. The reaction not only in Las Cruces but across all of southern New Mexico has been heartening: schools around the state have hosted fundraisers and moments of silence for Abe and his family. Organ Mountains' homecoming game last week was dedicated to him, and his classmates elected him King.

Now his story is reaching people across the country.

"Seventeen years is not nearly long enough, but it’s all he was given," the team's booster club said in an announcement Sunday. "It is very easy to focus on what we lost, but the true measure of a life is in the impact it makes on our world, not on the time he was with us."

"I'm sad and shocked, and his family has my prayers," said Gabriel Villegas, a star senior Wildcat cornerback who was on the field with Abe in Deming. "The game was very physical. Everyone was playing hard, and I don't think anyone was expecting what happened."

"It's sad and I'm truly sorry for the family," Ryan Alfaro said on Sunday.

'Football is his life'

Abe's mom never left his side. Elizabeth Alonzo, a single working mother, maintained a gracious vigil by her son's bed for more than three weeks.

"He loves the game and he loved to play," Alonzo said the day after the game. "Football was the first thing in his life, so much so that he didn't say anything about his injuries until his body gave up on him."

She maintained hope and faith throughout, but she also kept her grace. "My heart is filled with love hearing stories that everyone has shared with me about my son."

Alonzo welcomed more than a dozen players from Organ Mountain in the weeks following the injury when it became clear Abe's condition wasn't improving. Prayer vigils took place in the hospital waiting room. The number of calls and visitors was a testament to how loved her son was and how many lives he touched.

"I have no words or ways to thank everyone who has been praying for him," she said.

On Sunday, after three weeks of fighting and with his mom by his side, Abe died. Las Cruces, and all of New Mexico, seemed to stop and take note.

"He fought until the last minute," she said. "His body was so strong, and that fighter heart he had was unstoppable, like him."

Again, she thanked the community and everyone who had her in their thoughts.

"The pain of living without him will be forever, but I know he is in heaven now completely healed," she said. "I wish I could thank every person that did a prayer for Abe, the entire Las Cruces community, and every other city and every other school. My son is truly what Coach [Stephen] Castille called him, 'the ultimate Knight.'"

Despite her loss, Elizabeth Alonzo got to see how well she raised her son and how many lives he touched during his brief time. She'll continue to see generations of young Knights find inspiration and strength in his story. And she has gained a new family, Abe's numerous classmates and friends, as well as a community of supporters who won't let her forget him or what he meant to the community.

"I will see Abe in each of them on that field," his mom said.

Jason K. Watkins was a Bulletin reporter from 2003 to 2005. He is now a freelancer covering Southwestern New Mexico. He can be reached at jasonkwatkins.com.