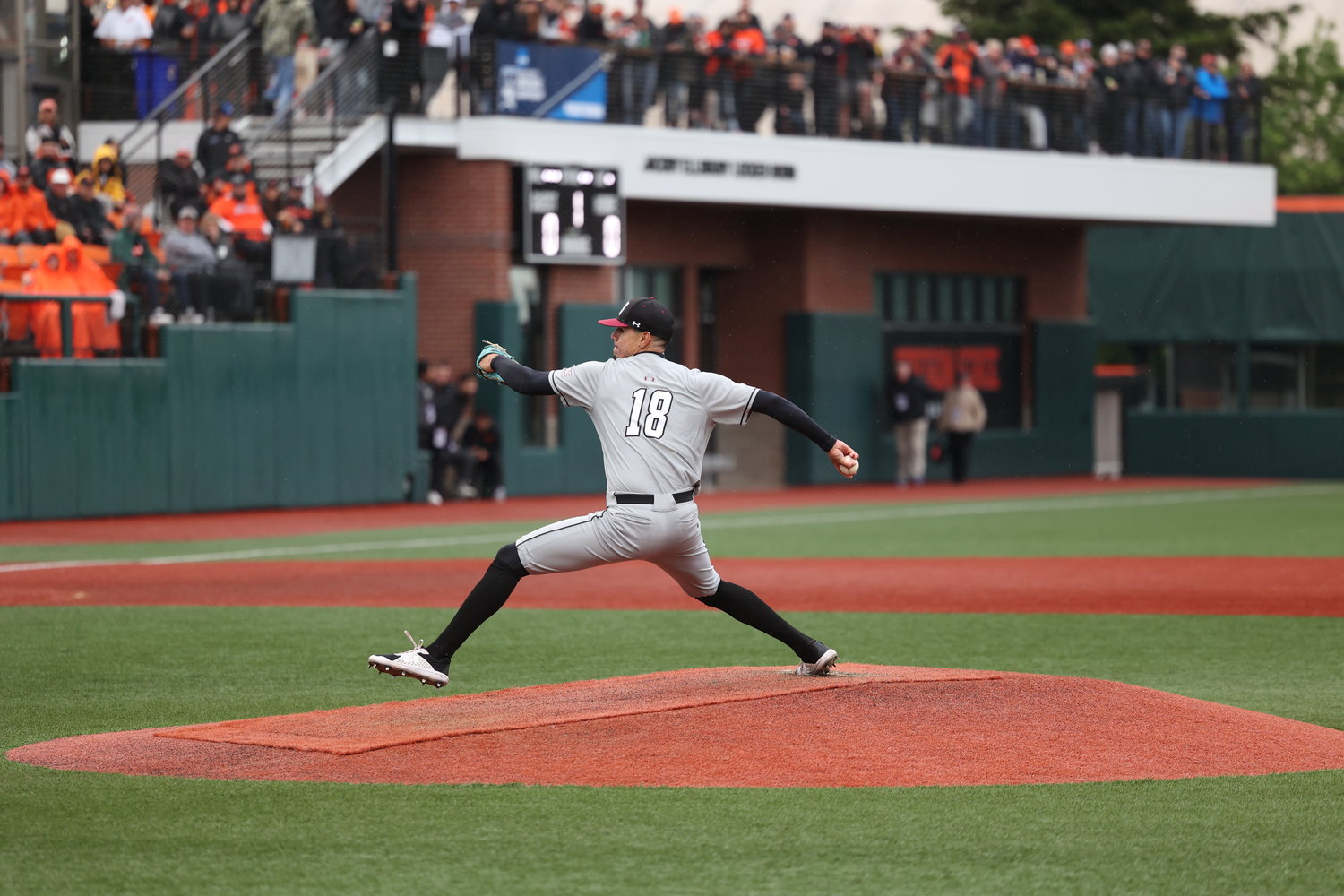 NM State's Ian Mejian threw 124 pitches while keeping the Aggies in the game against No. 3 Oregon State in the Corvallis regional.
From NMSU Athletics
Posted Monday, June 6, 2022 4:17 pm
By Dave Burge

The New Mexico State University baseball team saw its Cinderella run through the postseason come to an end in the Corvallis, Oregon, NCAA regional June 3-4, but not before making an impression on the national stage.

The Aggies, who barely made the Western Athletic Conference tournament only to run the table and win the conference title, gave No. 3 national seed Oregon State all it could handle in the opener before falling 5-4 in 10 innings.

The Aggies, 24-34 overall, were eliminated from the NCAA tournament the next day with a 21-1 loss to Vanderbilt, which was the national runner-up last year and had won the College World Series in 2019 and 2014.

Head coach Mike Kirby said he will always be proud when he thinks back about this year’s team and what they were able to accomplish.

“I am just so proud of this team for overcoming all the adversity they had to overcome,” Kirby said in a phone interview a couple hours after the Aggies’ season-ending loss. “It will only make them become better people and will help our young guys (become better players).

“Some nights, I’m starting three freshmen,” Kirby said. “No one is doing that (playing in the NCAA tournament).”

The Aggies had to overcome a rash of injuries this season, having young players get adjusted to key roles on a college Division I program and having to play some players out of position.

As Kirby likes to point out, with a college baseball team, you can’t just call up another player from a lower level when someone gets hurt or is academically ineligible.

Heading into the final regular-season series of the year, the Aggies had to beat Utah Valley two out of three on the road just to qualify for the WAC tournament. The first game against Wolverines, the Aggies scored seven runs in the ninth inning to win the game. They followed that up by scoring 17 runs the next game to clinch a spot in the conference tournament.

“That is when I thought the baseball gods were on our side for the first time,” Kirby said.

NM State then proceeded to go 4-0 in the WAC tournament in Mesa, Arizona, to earn the conference’s automatic bid to the NCAA tournament.

Against Oregon State, the Beavers paid the Aggies the ultimate compliment by throwing their top pitcher, Cooper Hjerpe, against them.

New Mexico State countered with another gritty performance. Aggie ace Ian Mejia threw 124 pitches in 7 1/3 innings to keep the NM State in the game. When he left the game, he was given a standing ovation by nearly 4,000 Oregon State fans in attendance at the regional. Outfielder Tommy Tabak had two clutch hits and knocked in three runs against the Beavers.

“They could have easily cashed in the tent this year,” Kirby said. “It would have been easy to do that. They wouldn’t have any part of that. As a result, they got rewarded by the baseball gods and got to have this great experience. I told them they would remember this the rest of their lives.”

Undergraduate assistants Nick Rogers, Connor Laux and Ryan Olson took a lot of mundane tasks off Kirby’s hands, like getting the team fed while on the road, and that allowed Kirby to concentrate on being the head coach.

“It was all awesome,” Kirby said.