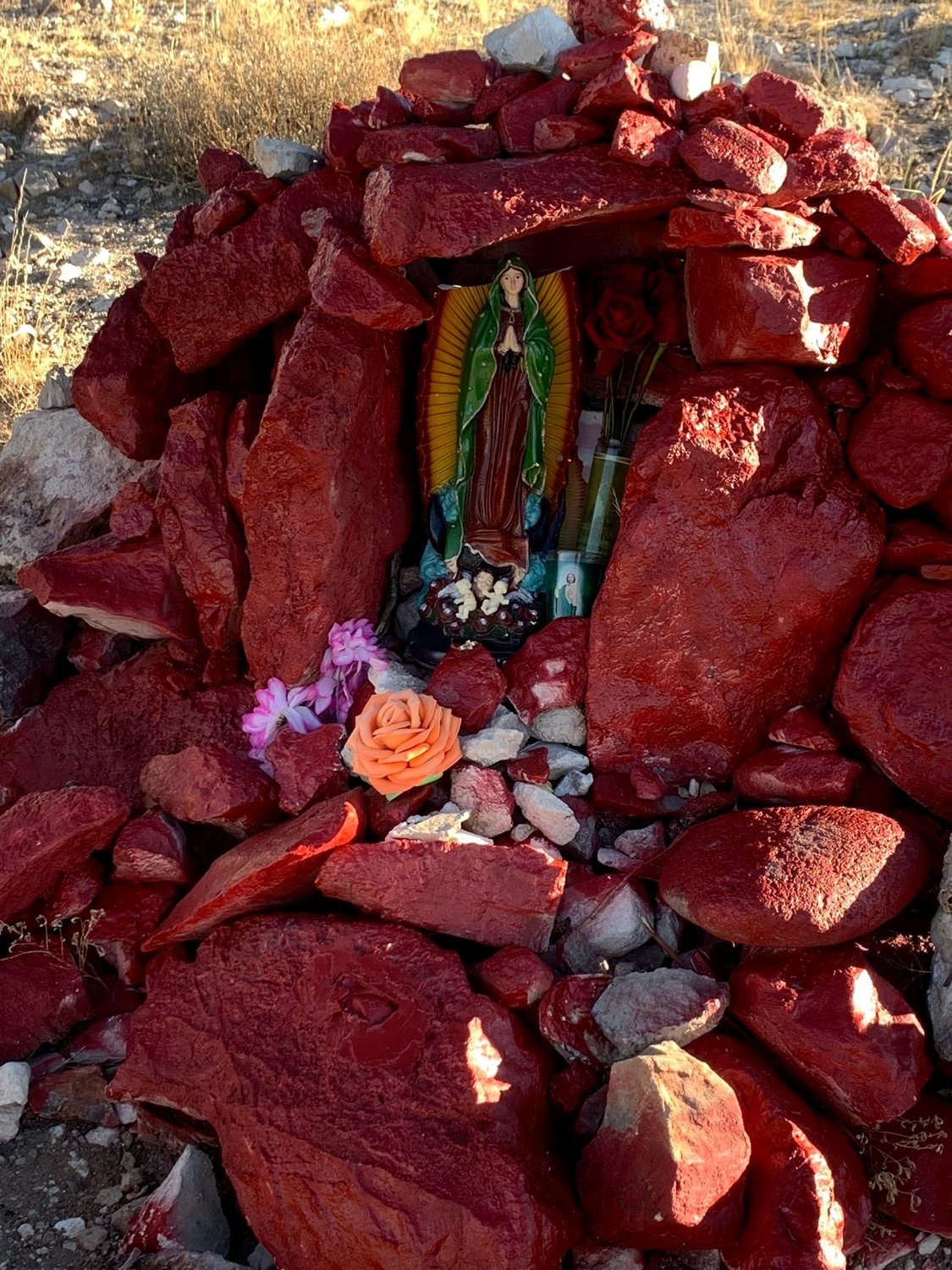 This shrine to Our Lady of Guadalupe is one of a handful of tributes at the top of Tortugas Mountain. For more than 100 years, the Tortugas Pueblo and parishioners of Our Lady of Guadalupe Church in Tortugas have made a Dec. 11 pilgrimage to the mountaintop in celebration.
BULLETIN PHOTO BY RICHARD COLTHARP
Posted Friday, December 17, 2021 10:18 am
By Richard Coltharp

When you live at the southern end of the Land of Enchantment, where the high temperatures in December frequently hit the 60s and 70s, it can be hard to get in the Christmas spirit.

Last Saturday morning, however, when it was pretty chilly, I saw on the New Mexico State University campus, from a distance, two ladies rollerblading on the track at the Pat and Lou Sisbarro Community Park.

From my vantage point, I could not see their feet, nor could I see the track itself. But their movements, and their attire, made it look just like they were ice skating.

My mental soundtrack filled in the scene with the Vince Guaraldi Trio’s “Skating,” from “A Charlie Brown Christmas.”

Suddenly, I realized the Christmas spirit had quietly set up shop in the Mesilla Valley.

Holiday greetings decorate store windows all around town. Grocery stores are stocked with foods and beverages of the season. People are breaking out their “ugly sweaters.”

Even some automobiles sport decorative designs. Although I did get a little chuckle when I saw the driver of a car adorned with “Peace On Earth” flip someone the bird after getting cut off in traffic.

Once the sun sets, the spirit really shines.

The plazas in both Mesilla and Las Cruces are joyfully decked out. It’s difficult NOT to get in the Christmas spirit when you stroll around either one, shopping at the unique stores and restaurants in both locations.

Saturday night was the night of Light Up Las Cruces on Mesquite Street. There were lots of lights, music and merriment, and Santa Claus himself was making the rounds. In La Nueva Casita Café, local singer Orlando-Antonio Jimenez was singing carols as Santa took photos with diners in the restaurant.

All along Mesquite Street luminarias lined the street. These little brown bags, glowing from within, can’t fail to bring a smile to people’s faces, wherever you find them in New Mexico.

I commend all the people who do the preliminary work of setting out the bags, filling them with sand, placing the candles and lighting them. If you’ve done this – and if you’ve lived in New Mexico very long, you’ve probably done it at least once – you know it’s not the easiest of tasks.

The end result, though, is more than worth it.

Some people poo-poo the electric luminarias, with their hard plastic “bags.” I disagree. While they don’t have the warm flicker of the natural candles, they still set the mood in a great way. It also allows them to be placed on roofes and walls in a safe way, and lets them be lit the whole season, not just for a night or two.

Saturday night included a showing of the Christmas classic “It’s a Wonderful Life” at the Rio Grande Theatre.

After all, where else do people so often order their dishes “Christmas style” year round?

Everyone is making and baking their favorite holiday treats and giving them to friends and family. Big on the list are cookies, especially that traditional favorite Las Cruces artist Bob Diven sings about in his song “Christmas in New Mexico.” His line goes: “The biscochos were tasty, both dozen of them …”

One of the longest-running December traditions in our area is the Our Lady of Guadalupe celebration among the Tortugas Pueblo. It’s a beautiful blend of indigenous, religious and family cultures that includes native dances, delicious food and the annual Dec. 11 pilgrimage up Tortugas Mountain (also known as “A” Mountain).

The Pan Am Center is always festive during December basketball games, as many fans wear their holiday sweaters and Santa caps. There are two men’s basketball games coming up: A 4 p.m. matinee Saturday, Dec. 18, against Northern New Mexico, and a 7 p.m. Monday, Dec. 20, affair against University of Texas-Permian Basin.

Another festive public place is the Downtown Las Cruces Farmers & Crafts Market, which is also great for finding last-minute, locally made, Christmas gifts.

Those are just some of the ways the Mesilla Valley gets its Christmas on, regardless of the lack of snow.

To steal another quote from Diven’s holiday tune, “My fire and spirit burn bright.”

I could write more, but all this talk about food reminds me I need to go get my Christmas tamales.