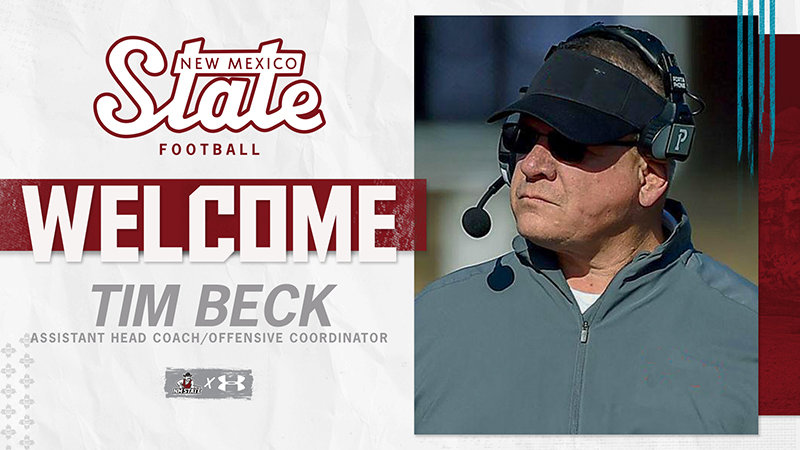 Less than 48 hours later, he went to work on building his coaching staff.

As announced by Kill Wednesday afternoon, Tim Beck has been installed as the Aggies' offensive coordinator and assistant head coach. Like Kill, Beck heads to New Mexico directly from TCU in Fort Worth, Texas, where he served as an offensive analyst for the Horned Frogs' football program.

Though Beck's most recent coaching stop prior to NM State was in Fort Worth, Texas, it was at the NCAA Division II level where he spent the vast majority of his career. From 1987-2019, Beck served in a coaching capacity for Pittsburg State in Pittsburg, Kan., where he helped lead the Gorillas to national prominence during his 30+ years affiliated with the program.

Through the last decade of his tenure at Pittsburg State (2010-19), Beck served as the program's head coach and made sure the Gorillas maintained their status as one of the nation's premier NCAA Division II programs. In that time, Beck compiled an 82-35 (.701) mark which included a 69-34 (.670) showing in Mid-American Intercollegiate Athletic Association (MIAA) tilts.

With Beck leading the way, the Gorillas generated three seasons of double-digit wins, the most memorable of those coming in 2011 when they went 13-1 and claimed the NCAA Division II National Championship. The Gorillas' national title that season came exactly 20 years after their last in 1991 - a season in which Beck patrolled the sidelines as the Gorillas' inside linebackers coach under head coach Jerry Kill.

A head coaching job at Pittsburg State seemed to be in the cards for the Kansas native who began his long tenure with the Gorillas as a student assistant coach in 1987. A one-year stint as a graduate assistant (1988) followed before Beck was elevated to the program's inside linebackers coach from 1989-91. Beck maintained his responsibility of overseeing the program's inside linebackers, too, during his time as its defensive coordinator (1992-93).

Beginning in 1994, Beck switched sides and was named the Gorillas' offensive coordinator - a position he held through the team's 2009 campaign. Pittsburg State's offenses were some of the best in the nation with Beck overseeing things as the Gorillas played their way to NCAA Division II runner-up finishes in 1995 and 2004. Pittsburg State's 2004 club made a name for itself across all NCAA divisions by amassing an all-division record in both rushing (5,320 yards) and total offense (8,976 yards).

Through the course of his 32-year tenure with Pittsburg State, the Gorillas went 314-85-2 (.786) and cemented themselves as one of the best NCAA Division II programs in the nation.

After not serving in a coaching capacity in the 2020 season, Beck took on the role of offensive analyst for TCU at the start of the 2021 season. With Beck on their side, the Horned Frogs ranked 37th among all FBS programs in total offense, racking up 435.8 yards per game and claimed a 30-28 victory over 12th-ranked Baylor on Nov. 6.

A 1988 graduate of Pittsburg State, Beck and his wife, Gena, have four children.