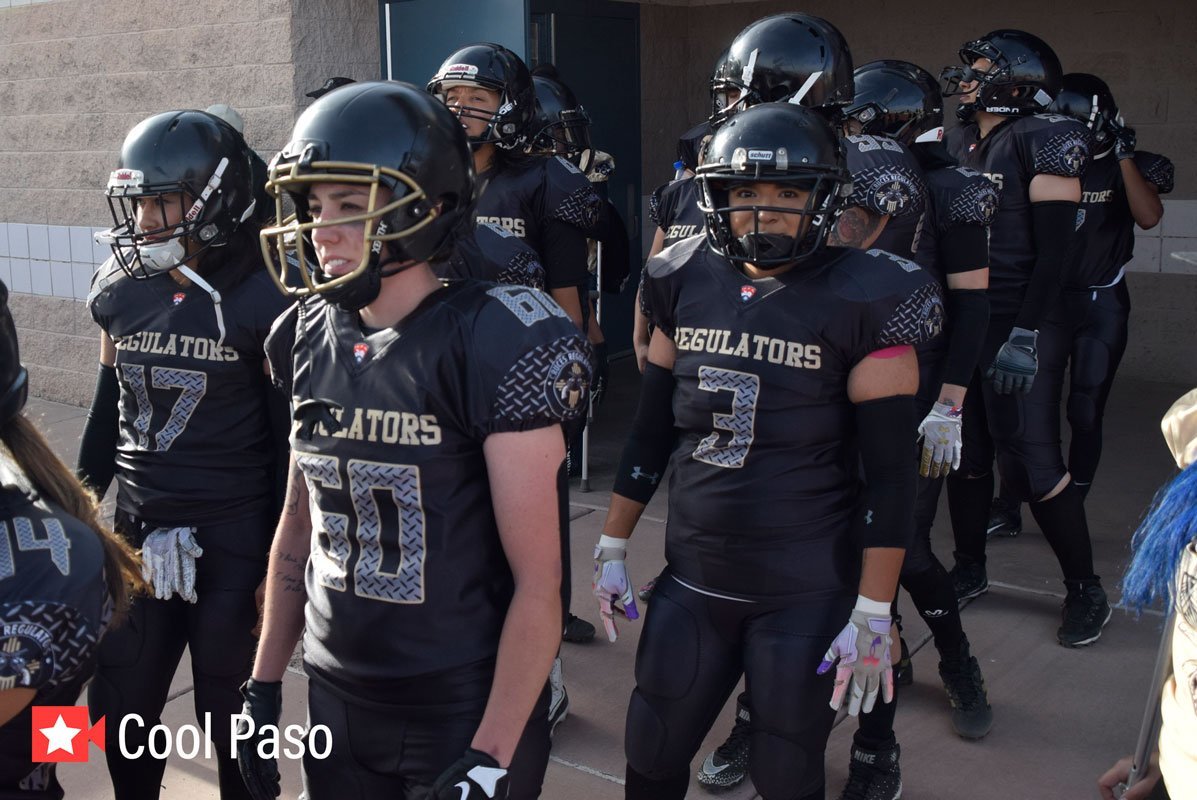 Cruces Regulators taking the field against the Rocky Mountain Thunderkatz.
Photos are from www.facebook.com/Crucesregulators 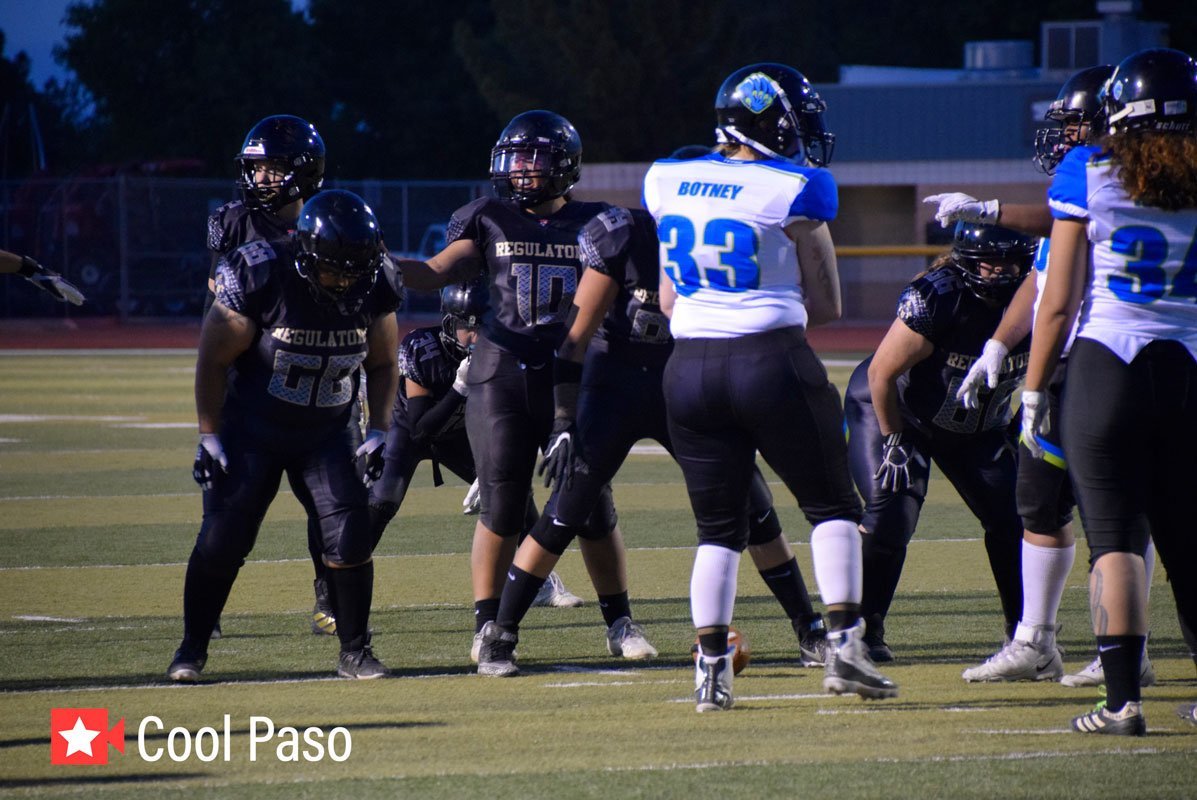 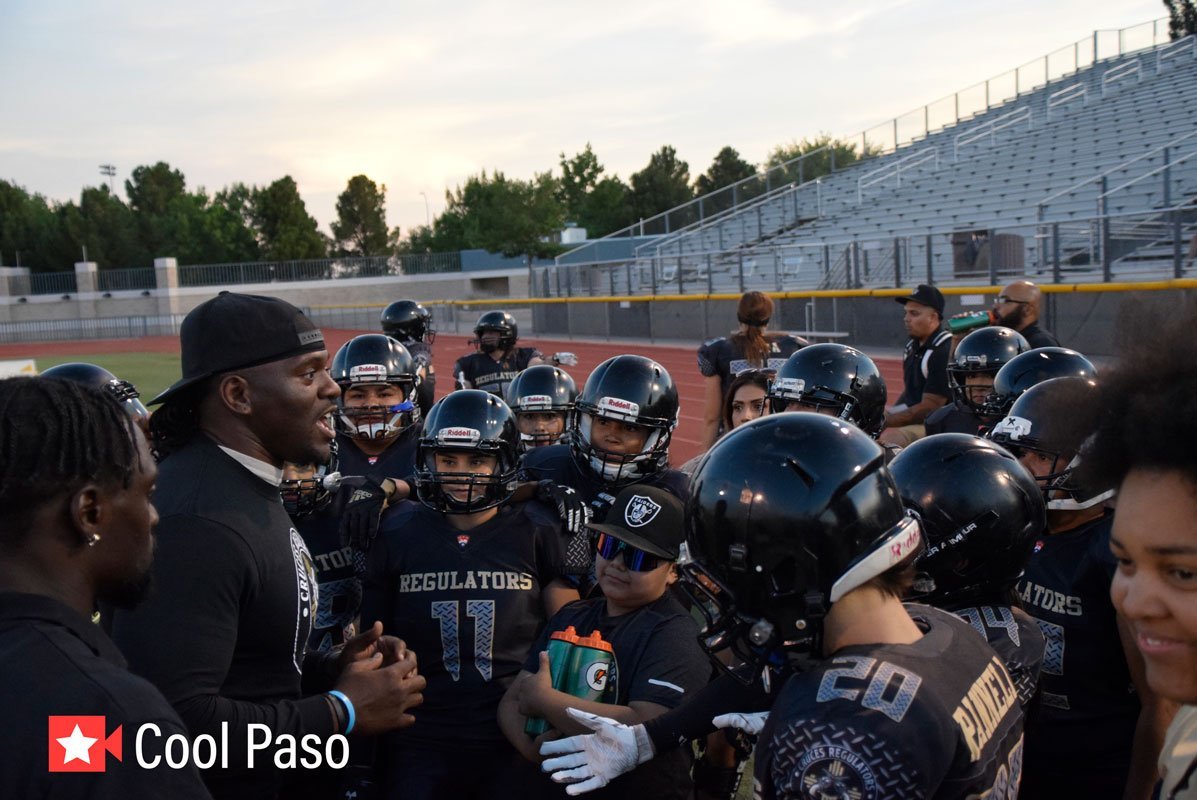 The Cruces Regulators in action May 28 against the Rocky Mountain Thunderkatz at the Field of Dreams in Las Cruces.
Photos are from www.facebook.com/Crucesregulators
Previous Next
Posted Monday, June 20, 2022 5:37 pm
By Mike Cook

It was a successful first season for the Cruces Regulators, the city’s professional women’s tackle football team, which finished 4-2.

“It was a great first season and we plan to come back even better than ever for the next one,” Regulators General Manager (GM) Jamar Cotton said on the team’s Facebook page. “I can say with much love and respect we have one of the best D3 (Women’s Football Alliance [WFA] Division 3) teams to do it.

“We look forward to the growth this off-season will give us to come back and represent our city, state and women’s football,” Cotton added.

The Regulators closed out their season May 28 with a 20-6 win over the Rocky Mountain Thunderkatz at the Field of Dreams in Las Cruces – they also beat the Thunderkatz May 7 in Colorado Springs. On May 21, Las Cruces completed a two-game sweep of the Sun City Stealth 48-20 in El Paso.

The team’s only two losses of the season were to the top two seeds in the WFA’s American Conference – the Arizona Outkast and the Oklahoma City Lady Force.

“We had a lot to prove and we proved it,” tight end Cindy Pitts said before the Regulators’ final game of the season.

The entire team is grateful to the community for its support, Pitts said.

For the Regulators, the season began as a hobby for team members who are now “living as a dream,” said cornerback Karla Garcia Romero.

All of the Regulators coaches had played football before, and some had coached women, wide receiver Mia Melchor said. “We learn as we go. We respect each other.”

All seven of the team’s 2022 All Americans said they recognize that the Regulators are blazing the trail for girls and women who want to play professional tackle football.

“This is just the beginning for the Cruces Regulators,” Pitts said.

“The success in our first year wouldn’t have been possible without dedicated women, coaches, support staff, community sponsors, family/friends and the owners, Derek Smith and Robert Rodriquez,” Cotton said.

The Regulators will hold tryouts later this year for their 2023 season.