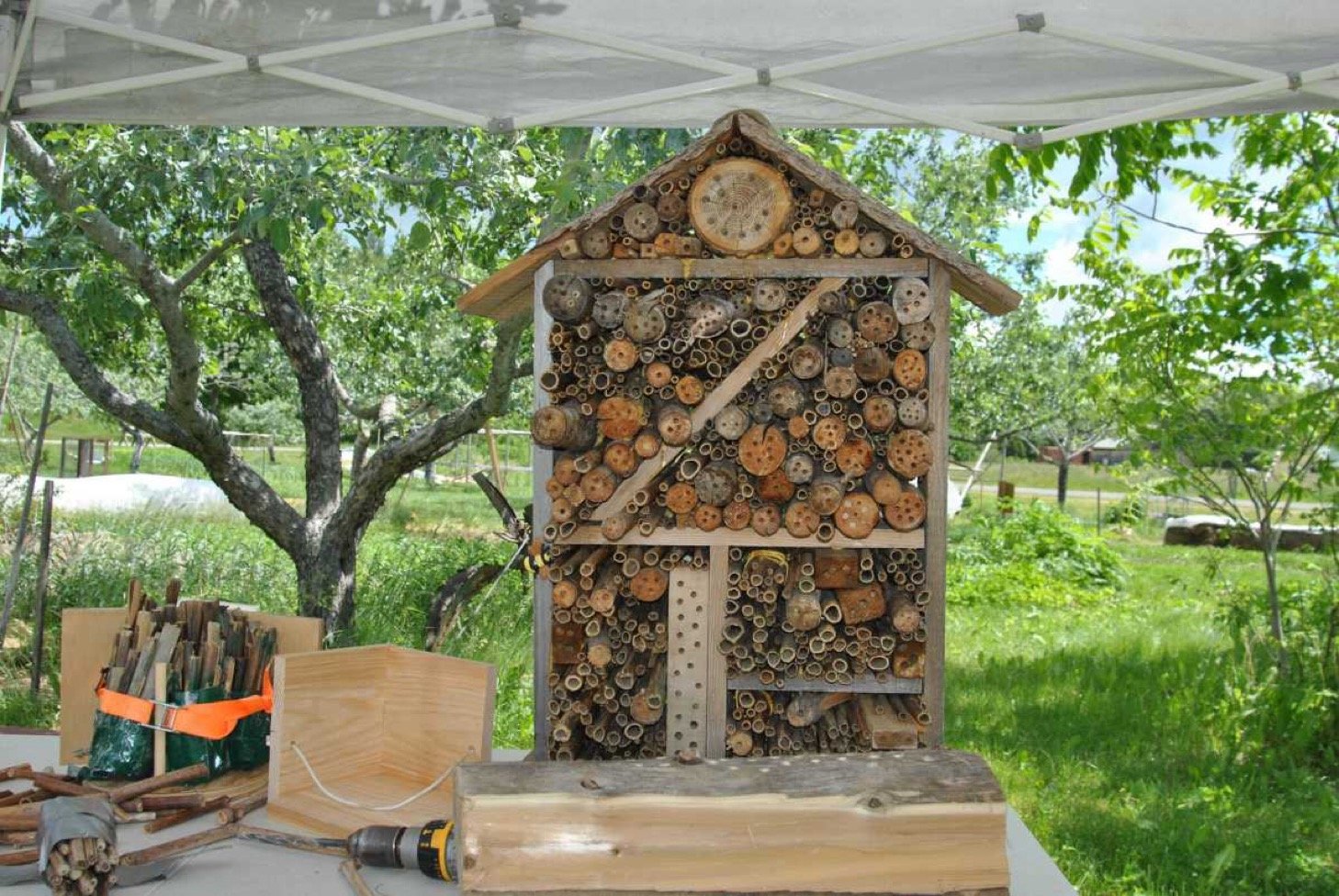 Bees and bats and butterflies…oh my! A new Fly-Inn is winging its way to Las Cruces thanks to the Daughters of the American Revolution.

Hailed as a Bee Hotel, the unique boutique abode is the project of Patricia Barger, state regent of the New Mexico Society Organization of the Daughters of the American Revolution (NMSODAR).

Barger, of Rio Rancho, initiated the bee hotel effort as her state regent’s project to help save the planet.

“We are in the middle of an insect apocalypse,” she explained. “Pollinators are in crisis and dwindling in great numbers due to the loss of critical feeding and nesting habitat.”

Enter the bee hotel, a provider of nesting habitat for pollinators and positioned in a spot of diverse plants. Bees are the predominant pollinators, but the bee hotel should also attract beetles, flies, ants, moths, butterflies and even bats, to name just a few.

Las Cruces is one of five bee hotel sites Barger has so that the DAR project reaches each corner of New Mexico. Other hotels are planned for Albuquerque, Santa Fe, Farmington and Portales. She hopes other New Mexico cities and towns follow the organization’s lead and build pollinator hotels in their communities.

“The greatest threat to our planet is the belief that someone else will save it,” she said. “People can, on a very local scale, do positive things to protect pollinators, as opposed to larger scale environmental issues.”

“We hope the community gets excited about it, too, and helps make southern New Mexico a little more hospitable to the dwindling numbers of pollinators, a world-wide problem,” Bartlett said. “Making the hotel successful can definitely raise awareness and ‘bee’ a community effort.”

The hotels will be made of recycled materials, “which can be anything … roof tiles, pieces of lumber, gravel, bricks, felled trees, tree trunks, or pine cones, for example,” Barger said. She is asking Las Crucens to “keep your eyes open for items that are good for insects.”

Barger said there should only be a subtle difference between bee hotels and a bee’s natural habitat.

“That being said, it should be more organized and built to attract a larger variety of pollinators in a more concentrated space. I often encourage people who want to attract pollinators to start by creating a pile of pottery shards, wood or twigs, rocks, sunflower stalks and leaves in a corner of their garden.

“There is no special criteria for building the hotel,” Barger said, “except that it be made of materials found in the pollinators’ natural habitat and that the objects be safe and untreated.”

Hotels should be securely anchored and raised off the ground a sufficient height so that the bugs are not harmed if there is a heavy rain, she said.  If trying to attract bats or other nocturnal pollinators, the structure should be a minimum of 7 feet tall. A height of 12 feet would be even better, Barger said.

The spaces to include when building the hotel will be suggested by the building criteria, she said, but will often depend on the up-cycled materials available.

Barger also asked for the public to keep their eyes open for appropriate hotel sites. She suggested that Las Cruces walkers and hikers be on the lookout for open spaces that could support the hotel, ideally where a diversity of plants in need of pollination already grow.

“If an entire community made small-scale changes, the payoff would be widely felt,” Barger said. “Ask yourself, ‘How can I help bees and other pollinators?’”

“We can all fight climate change by adopting sustainability behavior,” she said. “Everyone can do their part by planting a diversity of plants so a diversity of pollinators is attracted. We need to be biodiverse, and we want as many insect residents as possible.”

The hotel structures can be built by volunteers, although some funds have been set aside to pay for the construction, if necessary, Barger said.

Barger said she is a life-long bug-lover. She grew up in the Midwest and was always fascinated by insects, especially ladybugs and praying mantis.

Some of her happiest times are working in her garden, she said, and she is determined to do her part so that, “the next generation of pollinators be given safe, sheltered places to lay eggs, raise their young and overwinter.

“The next time you see a pollinator visiting a flower, know that their species has a better chance at survival with the launch of projects like this,” Barger said.

For more information about the Las Cruces DAR chapter or to volunteer for the Bee Hotel project, contact Mary Lee Bailey Shelton at 575-644-5121 and mlbs1@aol.com.