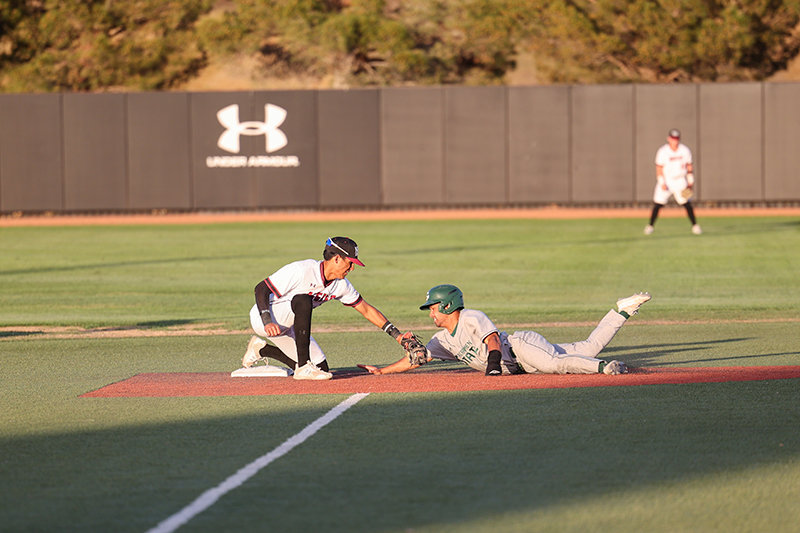 NM State’s Kevin Jimenez tags out a base runner trying to steal second April 8 in a game with Sacramento State.
COURTESY PHOTO FROM NMSU ATHLETICS 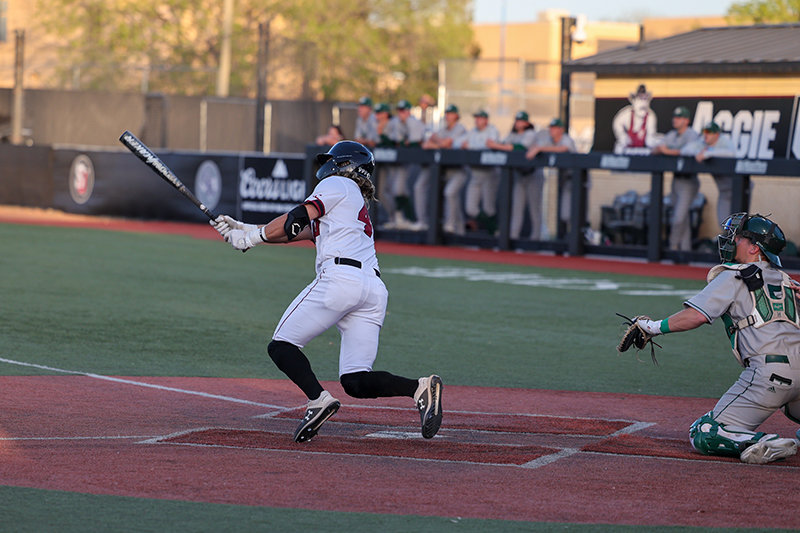 The New Mexico State University baseball team has been going through some growing pains and is still trying to hit its stride about halfway through the season.

The Aggies are 12-17 overall and 4-11 in the Western Athletic Conference after winning one game out of a three-game series at home with Sacramento State April 8-10. The series included a walk-off win by the Aggies and a one-run loss, their sixth of the season.

“I thought our records would be flipped around, and we’d have a few more wins,” third-year head coach Mike Kirby said in a recent interview.

The Aggies have had some injuries, some inexperienced players playing in new roles and some trouble finishing out games, Kirby said.

The Aggies’ usual Friday starting pitcher, Sammy Natera from Juarez, Mexico, has been injured for a couple of weeks, but has recently been cleared to return to the mound.

They are starting a freshman at catcher, Cal Kilgore from Kansas, and have a new closer in Alex Bustamante, a junior from Tucson, Ariz.

Both are talented but are still trying to figure everything out, Kirby said.

The Aggies have played some good baseball but have struggled at times in the late innings.

“Those are all learning things,” Kirby said. “The hardest innings to win are the last three – seven, eight and nine. We need to do a better job of finishing and win those last three innings.”

During a recent series against Grand Canyon University, which is in first place in the WAC’s West Division, the Aggies played the Lopes tough but lost two out of three in Phoenix. The series finale was a particularly tough loss. NMSU led 6-0 going into the bottom of the seventh, before losing 7-6.

Kirby dubbed this team “Los Grinders” before the season started and that moniker still fits, he said.

“These kids are awesome,” he said. “Baseball is a difficult game. If you are not learning something, you probably aren’t paying attention.”

The field has a series of improvements, including new dugout railings, a new mound, upgraded bullpen areas and new paint on the outfield fences.

But the biggest improvement is a new $900,000 indoor batting cage that was donated by longtime fans Mike and Judy Johnson.

The new batting cage is covered, shaded and has giant fans inside that help keep it cool, Kirby said.

With their former hitting facility, only two players could hit at one time. Now, eight can.

The Aggies will be at home this weekend in a nonconference series against WAC member University of Texas Rio Grande Valley. First pitch is 6 p.m. Friday, April 15, at 2 p.m. Saturday, April 16 and noon on Sunday, April 17.

The Aggies will officially dedicate the indoor hitting range at 1 p.m. Saturday and recognize the Johnsons for their generous gift.