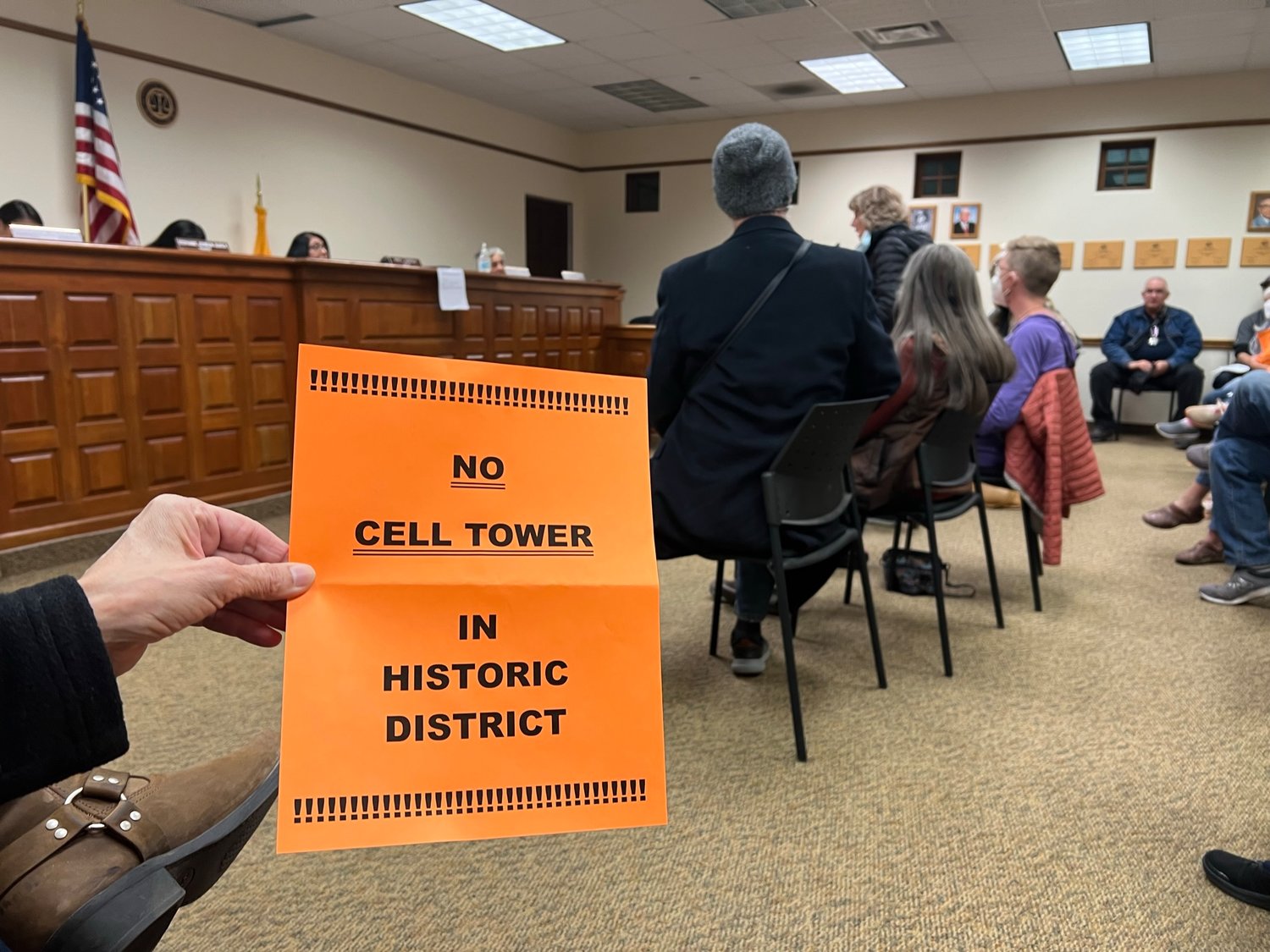 This tower would make a mockery of the historic district.”
Mesilla resident
By Elva K. Österreich

Citizens voiced their concerns over a proposed Verizon cell tower being built in an historic district park. Filling the Mesilla Board of Trustees council chamber Monday, Nov. 14 more than 20 Mesilla residents filed into the room and 14 of them stood to take turns to speak.

Following a Nov. 9 public hearing about the Verizon proposal of a 60-foot pine tree cell tower in Town Hall Park, just to the east of the fire station, residents made their feelings known at the Monday meeting.

Concerns were voiced about noise pollution and electromagnetic radiation. The tower will require diesel generators, tested weekly for an hour each time creating an additional hum. One resident said he has experience with living close to such a tower and that there actually is a constant hum, not only when a generator is tested. The science is still being studied, said one resident, regarding electromagnetic radiation.

The tower would be 60-feet tall, poorly disguised as an evergreen tree with potential for cautionary lighting, and 8-foot perimeter wall with surrounding 25 square feet around the structure, and possibly with protective metal fencing and/or barbed wire, stated one protester.

People also shared their concerns about home values, with the United States Department of Housing considering cell towers a nuisance with the potential to negatively impact home values from 7 to 20 percent.

“This tower would make a mockery of the historic district,” one man said.

Additional residents pointed out that cell towers have been proposed in the park before and turned down several times. And the town’s codes expressly prohibit a tower in the historic residential areas.

Rene Beltran lives across the street from the park and said she moved to Mesilla because she needed a save refuge for her family.

“I visit that park so many times a day with my dogs and I see it out my window and I see the many many families that visit the park,” she said. “I am disheartened to think how it will change the culture, the ambiance, the use of the park which I see as integral to the quality of Mesilla.”

Beltran said she has an immune compromised home bound child to worry about. She urged the trustees to look at the issue from the eyes of the people in the town.

“A park is another holy place for the community because it’s our access to the outdoors.” She said.

A single dissenter, a firefighter, stood up to support putting the tower in the park. He spoke about the importance of connectivity. He said emergency services use cell services to respond to emergencies.

“We get more than 500 calls a year for service from our residents needing our emergency help,” he said.

“There are places and places to put this cell tower,” Melanie Goodman responded. “I strongly encourage you all to find another location that would be more appropriate.”