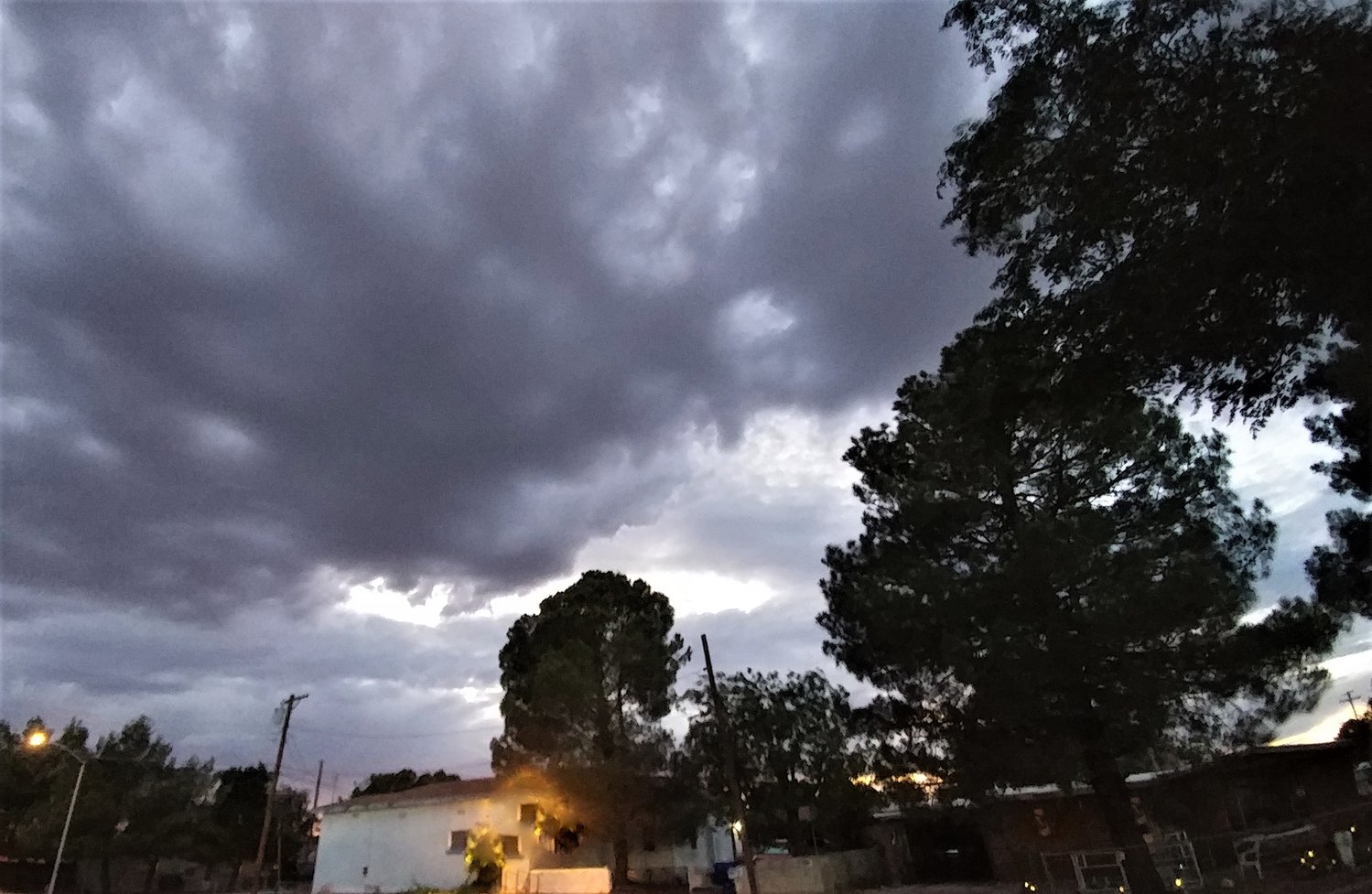 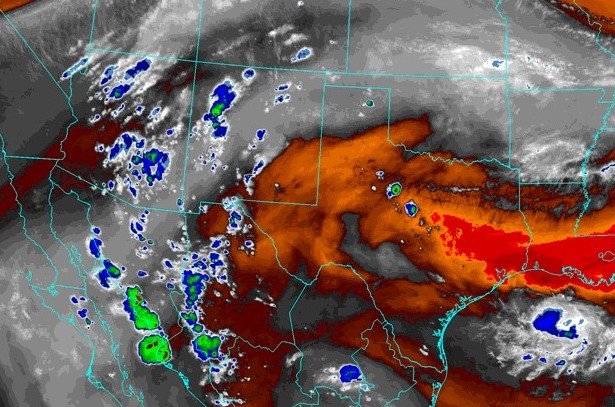 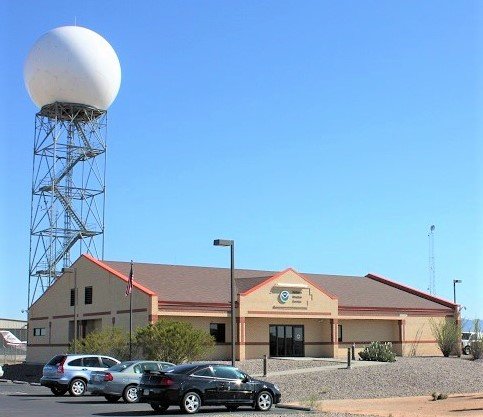 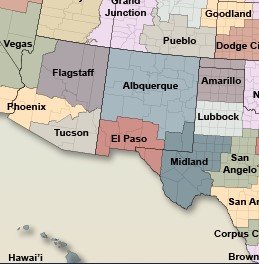 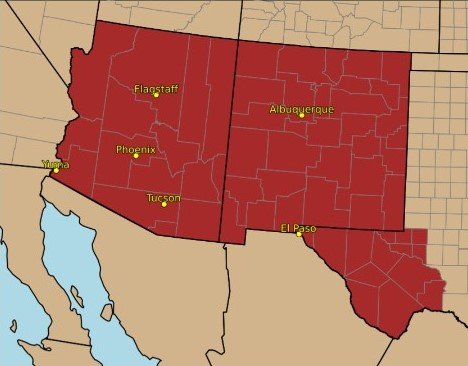 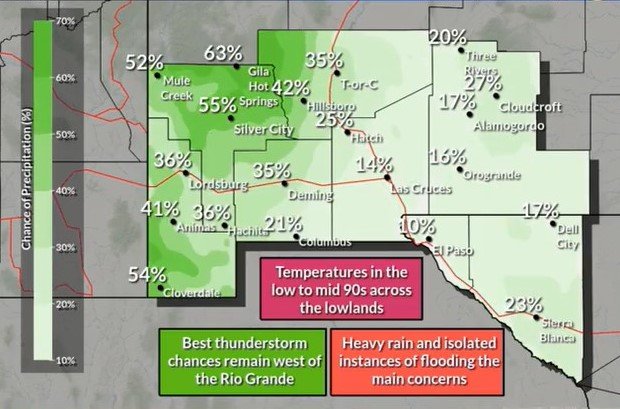 July 2, 2022 National Weather Service map predicting the chance for thunderstorms in the Southwest. 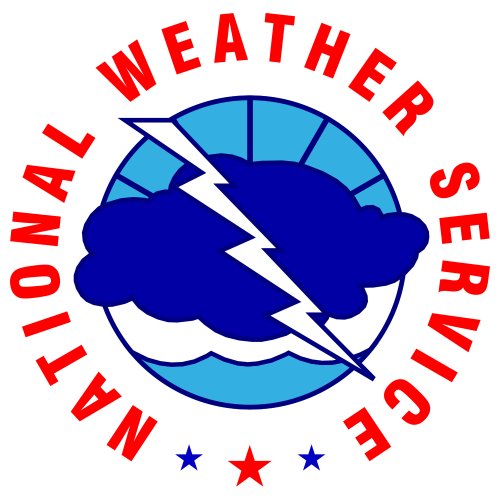 To help residents of Doña Ana County prepare for monsoon season, the Office of Emergency Management is setting up distribution sites for empty sandbags to help residents with flood mitigation.

City and county officials are assisting residents with preparation for potential flooding caused by heavy rain in a short period of time.

It is recommended to fill the sandbags close to where they are going to be used. It is advised to fill sandbags with either clean sand or soil. While yard dirt can be used, it is not ideal if it contains debris that could puncture the bag, providing an opening for water to penetrate the bag therefore weakening the ability to prevent flooding.

Good sources of sand are designated sand piles (at or near some County fire stations), as well as from arroyos. Sand can also be purchased in bulk (usually by the ton) from a variety of landscaping and sand/gravel companies (for those wanting to have it delivered to their houses).

Each household is allowed up to 25 empty bags, but in flood-prone areas, up to 50 per household will be provided. County residents may pick up sandbags at the following fire stations and community centers in Doña Ana County.

It’s an early start for the monsoon season, which could produce a total of six to seven inches in the Southwest United States by the end of September, Laney said in a telephone interview. He is the warning coordination meteorologist for NWS’ El Paso weather forecast office in Santa Teresa, New Mexico.

But even a wetter-than-usual summer won’t end the region’s drought, driven by a third consecutive La Niña climate pattern that forecasts a cold, dry winter, he said.

NWS defines the monsoon season as June 15-Sept. 30, but it doesn’t usually start in the El Paso-Las Cruces region until mid-July, Laney said. This year, however, the conditions that define the onset of the monsoons were in place in June.

“We really started seeing monsoon conditions full force on (June) 21,” Laney said, when both a high-pressure air mass and rising dew point (measuring moisture in the air) were in place. The 2021 monsoon season official started June 28, he said.

But a monsoon isn’t a rainstorm; it’s a seasonal reversal of winds.

In the desert Southwest, prevailing winds are from the west and southwest, Laney said. They come off other desert regions, so they don’t produce a lot of moisture. The pattern shifts in the summer “and we begin to have more of a flow from the south or southeast,” he said. “Most of the time it picks up moisture when it happens.”

An area needs to receive at least 50 percent of its annual rainfall as a result of the wind change for it to be a true monsoon, Laney said. Since El Paso gets an average of 5.7 inches of rain during the monsoon season (59 percent of its annual total) and Las Cruces gets about 5.5 inches (57 percent), “we definitely qualify to be a monsoon,” he said.

Because “summer thunderstorms can be quite isolated,” Laney said, “the numbers only tell part of the story. So much of it is who gets what,” he said, noting that west El Paso “took the brunt” during heavy monsoons in 2006 and La Union had severe flooding issues because of last year’s monsoon precipitation.

But even with a wetter-than-usual summer this year, the region’s drought is likely to continue, Laney said.

That’s because a La Niña weather pattern is in place for the third year in a row, creating a dryer, colder winter than one experienced during an El Niño.

El Niño is the warm phase of the El Niño–Southern Oscillation (ENSO) weather pattern (winds and sea-surface temperatures) in the equatorial Pacific Ocean that impacts weather around the world. La Niña is the opposite – a cooling phase of ENSO. There is also a third, neutral phase. (“El Niño de Navidad,” a reference to the Christ Child, was given to the warm, south-flowing air current centuries ago by Peruvian fishermen because it was most noticeable around Christmas. “La Niña” [the girl] came into use sometime later to denote the opposite air current.])