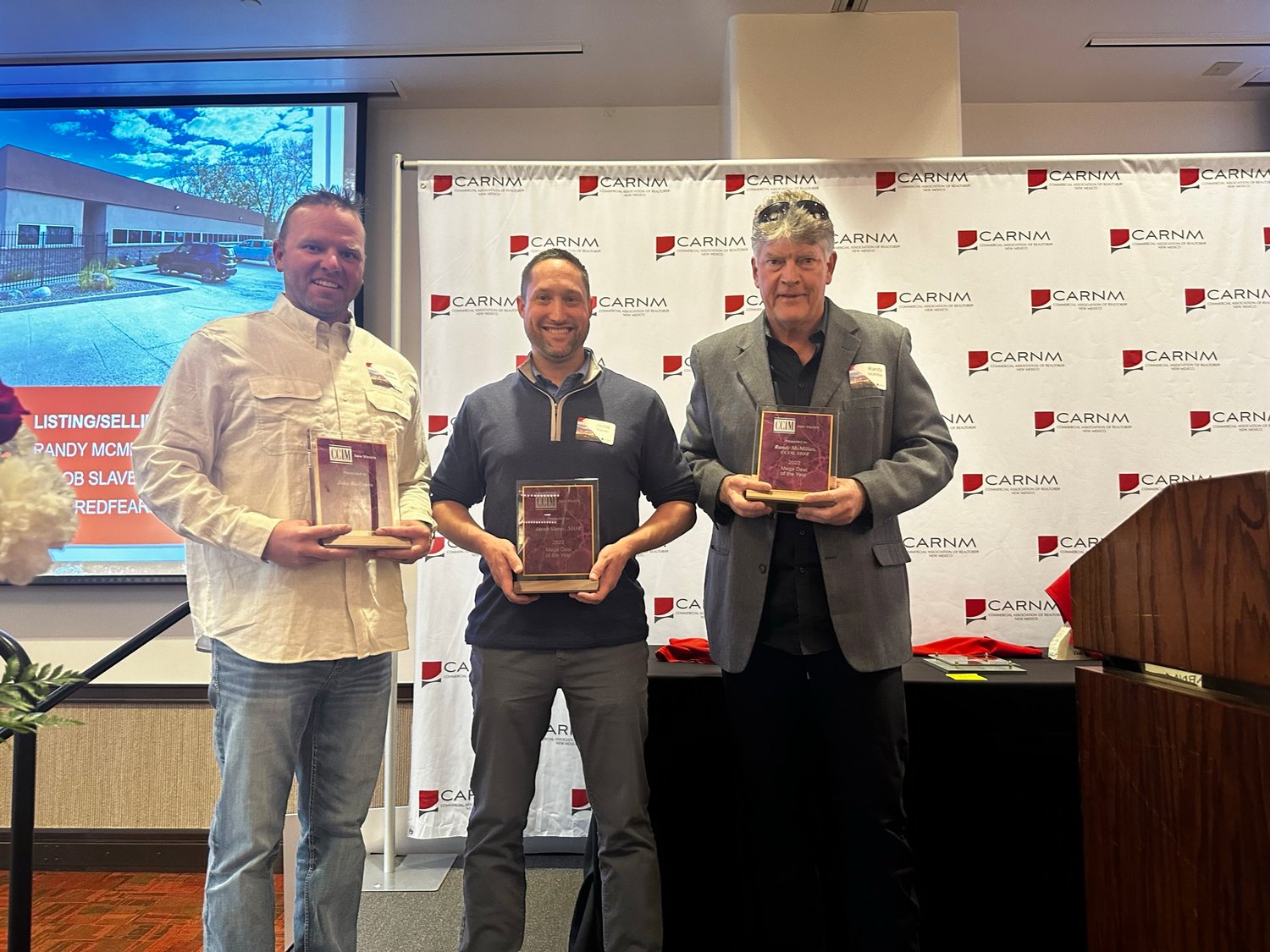 NAI First Valley Realty Inc. of Las Cruces won the 2022 CCIM Mega Deal of the Year award during the Commercial Association of Realtors New Mexico (CARNM) meeting in Albuquerque in November. The deal was completed by Randy McMillan, Jacob Slavec and Jake Redfearn.

It’s the third time in the last five years (2018, 2020 and 2022) the Las Cruces real estate company has won that top honor, Redfearn said, and “really the second time a row,” he said, as CARNM did not hold an annual conference or make the award in 2021 because of COVID.

NAI 1st Valley was also the runner up for this year’s mega deal award with a major real estate transaction in Santa Fe, Redfern said.

All those wins by a company “in little Las Cruces (has) the big boys in Albuquerque scratching their heads,” said McMillan.

McMillan said NAI 1st Valley competed against real estate agents “coast to coast” to get the listing. He said NAI “got a seat at the table” thanks to the late Walter Skowronski of Las Cruces, with whom McMillan worked for 25 years. Skowronski, he said, sold much of the land on which the office buildings in this portfolio were constructed.

“He gave us the listing proposal along with all the others,” Redfearn said.

“The way we won the listing assignment was, everyone else that put in a proposal … listed the buildings as a whole,” he said. “We actually went to every single building before the presentation in 19 different cities in New Mexico, walking the properties,” Slavec said, and putting together a spread sheet that listed each property’s age, condition, lease, expenses and pricing.

“We worked for two months putting together our leasing presentation,” he said.

During the three-hour presentation, the NAI 1st Valley team was told, “’You guys did your homework. You know the properties,’” Redfearn said. “’Nobody else has put in the time and effort to analyze.’”

The NAI proposal generated three offers that were within 1.5 percent of each other,

McMillan said he has worked on $25-$50 million real estate deals in the past, but the project is “three times the size of any transaction we’ve had the opportunity to do.”