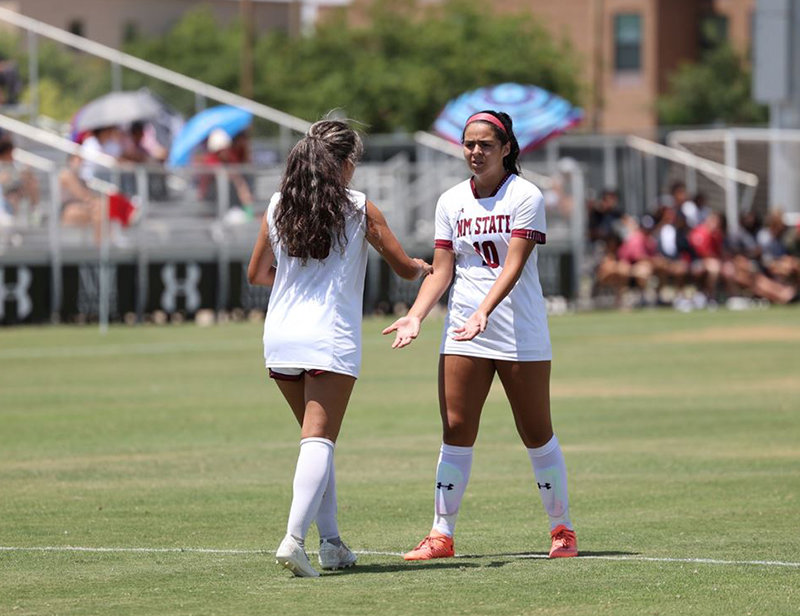 VOLLEYBALL: NMSU won two of three matches Aug-26-27 in Tucson at the Cactus Classic. They beat Alabama State and LIU Brooklyn, both by scores of 3-0, and fell to host Arizona 0-3. The weekend of Sept. 2-3, the 2-1 Aggies will be in Davidson, North Carolina, competing in the Davidson Classic before returning home for a pair of matches against UC-Santa Barbara Sept. 9-10 at the Pan American Center.

WOMEN’S SOCCER: Coming off a narrow 2-1 loss at Texas A&M in College Station, the Aggies will host rival UTEP 7 p.m. Thursday, Sept. 1, at the NM State Soccer Athletic Complex. They’ll follow that with another home game at 7 p.m. Saturday, Sept. 3, against Portland State. NMSU is 0-2-1 on the season.

FOOTBALL: Following its 23-12 loss in the home opener against Nevada, NMSU travels to Minnesota for a 7 p.m. Thursday, Sept. 1 game against the Golden Gophers, Aggie Coach Jerry Kill’s former team. The next game will be in El Paso as the Aggies make the short trip to UTEP for a 7 p.m., Saturday, Sept. 10, game against the rival Miners, who lost their home opener 31-13 against North Texas. NMSU drew a good crowd against Nevada; the 23,371 attendance is 81 percent capacity for Aggie Memorial Stadium. The game was delayed 35 minutes in the first quarter due to lightning strikes in the area. The next home game is Saturday, Sept. 24, versus Hawaii.