Reigning national player of week strikes out 11 in Friday's loss 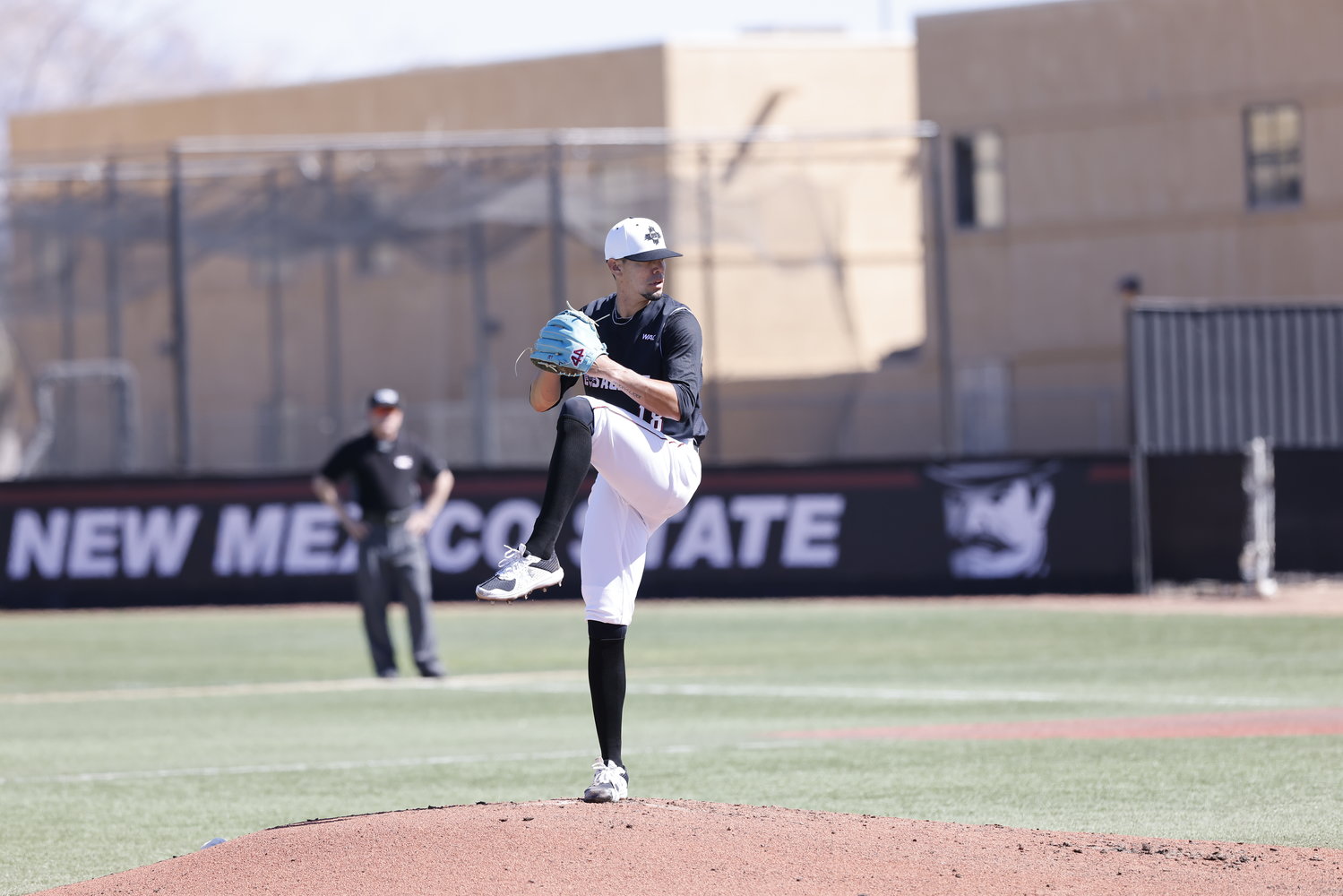 NM State's Ian Mejia on the mound from a game earlier this year.
NMSU Athletics
Posted Saturday, May 7, 2022 8:12 am
From NMSU Athletics

RIVERSIDE, Calif. –  Sometimes a dominant start on the mound is not quite enough to lift a baseball team to victory. NM State learned this the hard way, despite Ian Mejia's stellar start. In the series opener, the Aggies fell 6-2 to California Baptist on the road.

There's being in a zone and there's whatever Mejia is doing currently. After earning National Player of the Week honors from Collegiate Baseball for his dominant start over Dixie State, Mejia put up similar numbers on Friday against California Baptist. The Tucson, Arizona native fanned 11 more after striking out 13 Trailblazers in his last start.

Offense was minimal for the Aggies in the series opener. Logan Gallina broke the no-hit bid from the Lancers in the fourth inning with his 17th home run of the season. The towering home run was the lone hit of the game for NM State.

The Aggies got another run back in the fifth inning without producing a run. Cal Villareal drew a walk before AJ Garcia reached on an error. With two aboard, Nolan Funke was hit by a pitch to load the bases for Cal Kilgore. The freshman catcher hit a ball weakly back to the pitcher but the Lancer arm was unable to make a clean play, allowing Villareal to score from third.

Three runs from California Baptist got the Lancers on the board early. Taking advantage of a pair of errors, the Lancers jumped out to the hot start, highlighted by back-to-back doubles.

Mejia and the Aggies held California Baptist at bay until the seventh inning. After striking out the first two hitters of the inning, Mejia induced what appeared to be a routine fly ball. The ball was lost in the lights, allowing the Lancers to score a run. Another single gave California Baptist their second run of the inning and pushed the lead back to three runs.

California Baptist added an insurance run in the bottom of the eighth inning. Leading 6-2 going to the ninth inning, the California Baptist reliever was looking to finish off a 12-out save. He did just that as the Aggies had two runners reach without a true scoring threat in the frame.

On-Deck
NM State will be back in action on Saturday against California Baptist. First pitch will be thrown at 6 p.m. MT with all of the action being streamed on ESPN+.