Aggies will battle in the Corvallis regional with No. 3 Oregon State, Vanderbilt and San Diego 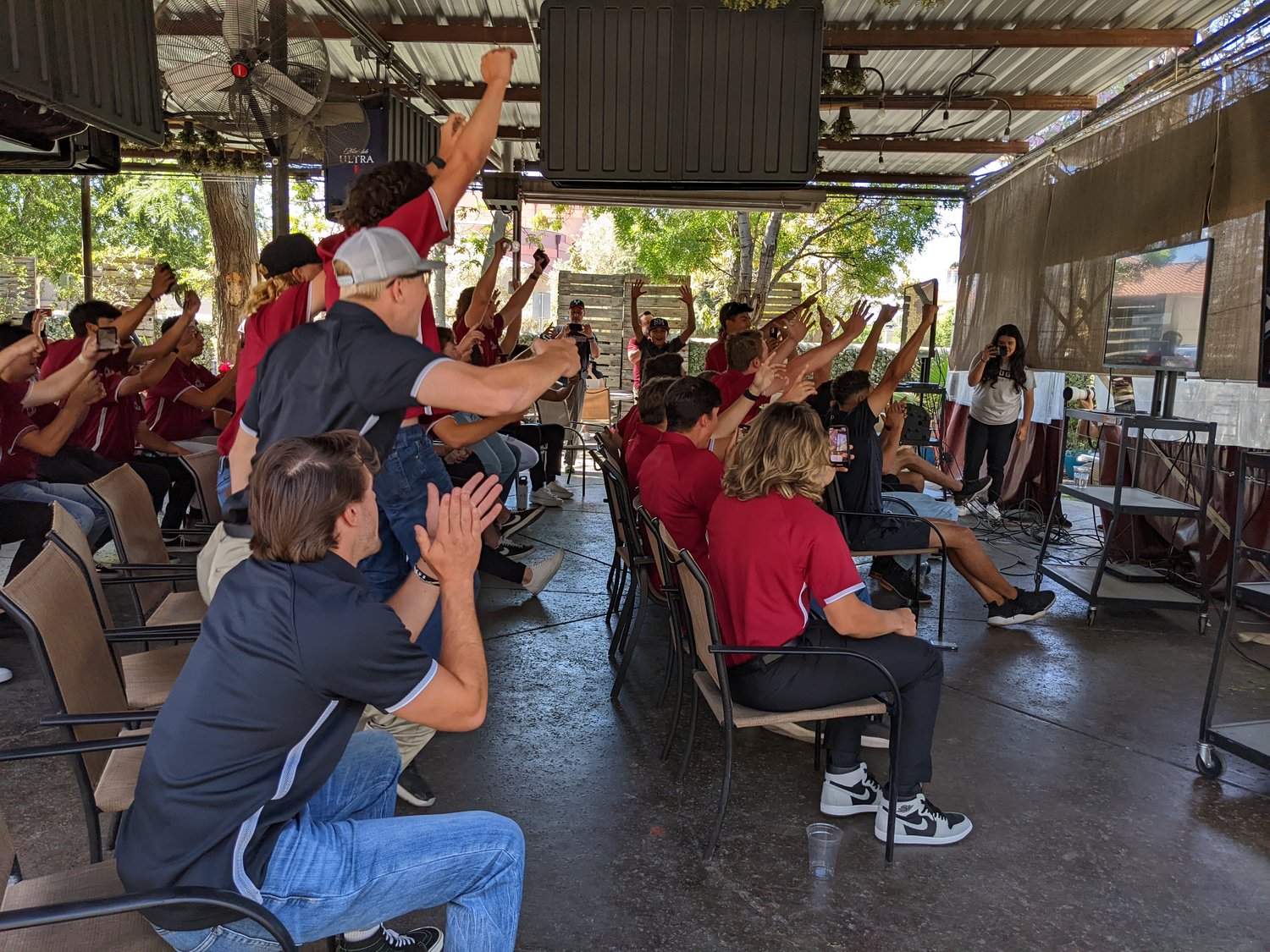 The NM State baseball team reacts to be selected to face No. 3 Oregon State in the Corvallis regional.
Bulletin photo by Dave Burge
Posted Thursday, June 2, 2022 12:02 pm
From NMSU Athletics

NM State vs. No. 3 Oregon State

CORVALLIS, Ore. – For the second time in four seasons, the NM State baseball program is heading back to the NCAA Tournament. While the Aggies had made a pair of postseason appearances recently, it will be just the sixth time in school history that the Aggies are going dancing.

On Friday night, the Aggies will get underway with regional host and No. 3 Oregon State at 8:00 p.m. MT on ESPN U. Ian Mejia will get the ball for NM State, opposing top prospect Cooper Hjerpe who will throw for the Beavers.

ABOUT THE BEAVERS
The Beavers enter the 2022 Corvallis Regional as the third-overall seed across the country. The Beavers fell in the Pac-12 championship game to Stanford, 9-5. In conference play this season, Oregon State finished with a 20-10 record, winning the Pac-12 regular-season title.

In two games against Grand Canyon, the Beavers split the series. Oregon State was also slated to play Seattle U but the game was canceled.

The Beavers have lifted the trophy in Omaha three times before. In 2006 and 2007, Oregon State claimed back-to-back College World Series titles before once again reaching the mountain top in 2018. The Beavers have claimed 26 conference championships and made 20 NCAA Tournament Appearances, making it to Omaha seven times.

Mitch Canham is in his third season as the head coach of Oregon State baseball. Thus far, Canham has posted an 81-42 record. Legendary OSU head coach Pat Casey retired after the 2018 College World Series championship, winning 900 games in his career.

Former Beaver and top prospect Adley Rutschman made his MLB debut on May 21. Rutschman, a catcher and former number one overall pick, was the battery mate of former NM State pitcher Kyle Bradish in his first Major League game.

ABOUT THE COMMODORES
The Commodores head to Corvallis as the number two seed in the regional. Vanderbilt suffered back-to-back losses to Tennessee and Kentucky in the SEC Tournament to be eliminated. Nonetheless, the Commodores captured an at-large bid with a 36-21 record.

In the last postseason trip to Corvallis, the Commodores were eliminated by the Beavers in the 2017 Corvallis Super Regional.

Throughout the 2022 regular season, Vanderbilt played ranked opponents 19 times and posted an 8-11 record.

The Toreros took two of three games over Grand Canyon and swept the two-game season series against California Baptist, posting a 4-1 record against WAC opponents.

The trip to Corvallis will be the ninth postseason trip in San Diego's history and the first trip since 2013 when future MLB Rookie of the Year and Most Valuable Player Kris Bryant led the Toreros.

Much like NM State, the Toreros were considered a bid stealer in the NCAA Tournament after winning the WCC Tournament, upsetting nationally-ranked Gonzaga twice.

ABOUT THE CORVALLIS REGIONAL
The Corvallis Regional will begin with a game between No. 2 Vanderbilt and No. 3 San Diego at 1 p.m. PT on Friday. The Aggies and Oregon State will meet at 7 p.m. PT with the game being televised on ESPN U.

John Schriffen and Kevin Stocker will have the call for ESPN while Adam Young will be on 99.5 FM Zia Country and ESPN Radio 101.7 FM  The TEAM Albuquerque bringing the call back to fans in New Mexico. Fans can also find Young's call on The Varsity Network app.