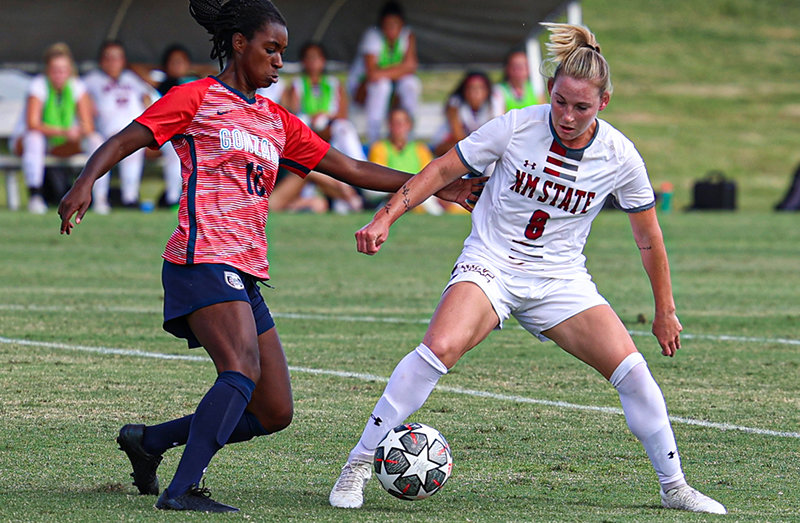 THE KICKOFF
• With its non-conference schedule a matter of record, the NM State women's soccer team turns its attention to its 10-match WAC slate. The Aggies start league action Thursday night at 7:00 p.m. when they make a first-time trip to St. George, Utah, for a battle against Dixie State.
• The WAC Digital Network will stream every second of the action from the Beehive State.

THE SERIES
• One of the newest teams both in the WAC and in the NCAA Division I ranks, Dixie State had not played NM State prior to the 2021 calendar year. The Aggies hold a 1-0-1 all-time record against the Trailblazers with both games having been played at the NM State Soccer Athletics Complex.
• The Aggies outscored the Trailblazers 3-2 in last season's pair of showdowns. Two of the Aggies' three goals against the Trailblazers came off the feet of Hannah Leitner while Megan Ormson added another.
• Thursday night's tilt marks the first time Dixie State will play NM State in St. George, Utah.

WAC ATTACK
• In the WAC Preseason Women's Soccer Poll, NM State was picked to finish fifth among the six teams in the league's West Division.
• NM State has constructed an all-time record of 4-6-2 in WAC openers. Fourth-year head coach Rob Baarts has gone 1-2 in league lid-lifters, with his lone win coming last season as the Aggies took down Chicago State by a 5-0 score.

ABOUT THE AGGIES
• With WAC play starting Thursday evening, NM State sets its sights on its first season with an at or above-.500 mark in league action since 2017 (3-3-1). In the history of its program, NM State has finished .500 or better in league action twice - first in 2009 (4-3-1) and the second time in 2017.
• Now in his fourth season in charge of the Aggies, Baarts has succeeded in increasing the Aggies' win total in league action every single season. After going just 1-7 in WAC play during his inaugural 2018 campaign, Baarts and his crew went 3-5 the following year and matched the program record for regular-season league wins in a single season (four) with a 4-9-1 showing in WAC play during the spring of 2021.
• NM State possesses a 29-68-10 all-time record in regular-season WAC showdowns.
• Junior forward Hannah Leitner continues to lead both the Aggies and the WAC in terms of total assist (four) and assists per game (0.50). The Tucson, Ariz., product is the program's all-time leader in career assists (12) and also ranks 10th all-time in with eight goals in her career.
• Senior Corey Kizer is making her way up the Aggies' all-time goal scoring charts, too. The Placitas, N.M., product has amassed 10 goals in her career - good for seventh all-time.
• Another Aggie who has made her way into the program's top-ten career goals list is Xitlaly Hernandez. Her eight career scores are tied for the 10th-most in a career in the history of the program.
• Shea O'Connor serves as another important piece of the Aggies' attack plan. The senior out of Eugene, Ore., is tied for the team lead in goals scored this season (two) and like Kizer has pumped in 10 goals throughout her tenure in an NM State uniform.
• Senior goalkeeper Makenna Gottschalk ranks second among all WAC netminders with two clean sheets so far in 2021 and the Broomfield, Colo., native has been moving up the program's all-time saves list since the season began, too. Gottschalk has made a total of 85 stops in her NM State career - the eighth-most by any goalie in the history of the program.
• Staying healthy has, unfortunately, been somewhat challenging for NM State this season. The Aggies haven't had the benefit of playing with their full compliment of players since their showdown at Big 12 foe Texas back on Thursday, Sept. 2.

SCOUTING DIXIE STATE | ROSTER | SCHEDULE | STATISTICS
• A 2-1 victory at Southern Utah last Thursday night represents the Trailblazers' lone victory in their last five matches. Three of Dixie State's four triumphs this far in 2021 came in its first five matches.
• So far, senior Whitley Griffiths is living up her 2021 Preseason All-WAC Team hype. The senior currently leads the team in both goals (three), points (seven) and shots on goal (11).
• In net, Kayla Gonzales has taken up the lion's share of the minutes. Her 64 saves represent a large portion of the team's 67 and she has also constructed a 5-5 record with a 1.91 goals against average.
• Dixie State was picked to finish sixth out of the six teams in the WAC's west division in 2021.
• Since joining the WAC, Dixie State has posted a 1-8-1 home record. That includes this season's 0-2 mark. The Trailblazers' lone win at home came on Sunday, April 4, 2021 when they took down WAC adversary UTRGV by a 2-1 tally.
• Dixie State has already exceeded its win total from the 2021 spring season. Last spring, the Trailblazers went 3-10-2 which featured a 3-8-1 showing in WAC contests.

COMING UP NEXT
• The highly-anticipated rematch of the 2021 WAC Women's Soccer Tournament semifinal bout between NM State and eventual NCAA Tournament second-round participant Utah Valley is next on the Aggies' docket. NM State and Utah Valley will duke it out in Orem, Utah, at 7:00 p.m. Saturday night just a few months after the Wolverines eliminated the Aggies in a penalty kick shootout at the WAC Tournament. ESPN+ and the ESPN app are set to stream to the showdown.