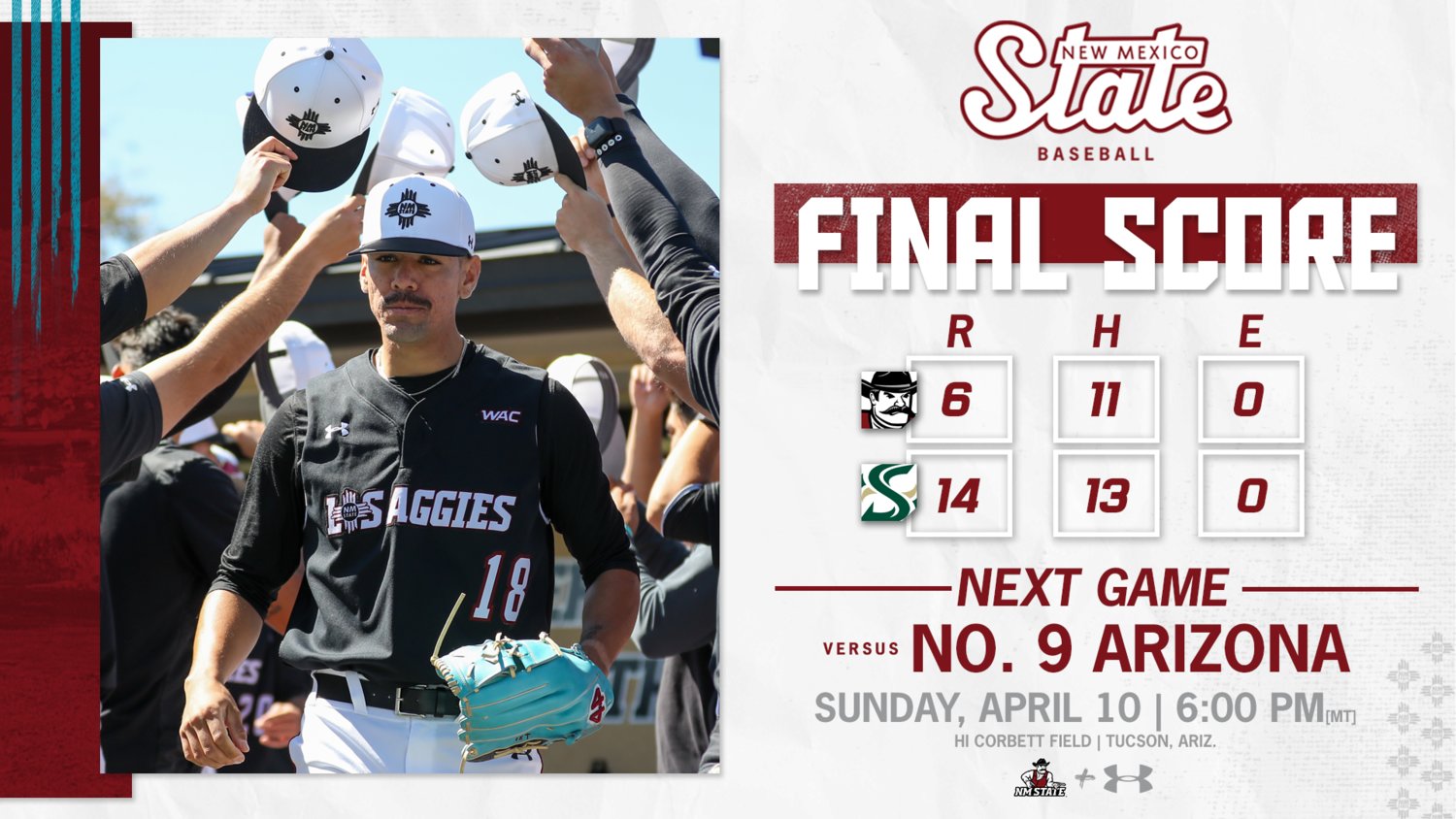 LAS CRUCES, N.M. –  The NM State baseball team took to the ‘Skew on a windy Sunday afternoon to close out the three-game series against Sacramento State, dropping the contest 14-6.

The Hornets jumped on Ian Mejia early, taking a quick 3-0 lead off a three-run blast to centerfield. Mejia would recover quickly, striking out the next two batters.

Tommy Tabak put the Aggies on the board making it a 3-1 game in the bottom of the second with a solo home run, his third of the season.

Sacramento State tacked on a run in the top of the fifth and sixth innings, increasing their lead into a 5-1 Hornets advantage.

The Aggie bats went to work in the bottom of the sixth, Ryan Grabosch getting it started with a single to center field followed by a Brandon Dieter double down the left field line to put two in scoring position. Logan Gallina came up to bat next, knocking a single through the left side to score Grabosch and make it a 5-2 game.

After a pitching change by the Hornets, Tommy Tabak stepped into the batter’s box and launched his second home run of the day, a three-run shot to right field to tie the game 5-5.

Sacramento State battled back in the top of the seventh, adding a quartet of runs breaking the tie and making it a 9-5 affair.

Ryan Grabosch stepped up to the plate in the bottom of the seventh, blasting a solo home run to left field, his third of the season to bring the Aggies within three, 9-6.

A three-run homer by the Hornets stretched their lead back to six, 12-6 before the Aggies second 6-4-3 double play of the afternoon ended the top of the eighth.

Brandon Doty came in for the top of the ninth in his second appearance of the season, before the Hornets hit their third home run of the game to make it a 14-6 lead. Kevin Jimenez recorded his second hit of the game in the bottom of the ninth, but a 3-6-3 double play ended the inning and the game.

On-Deck
Coming off a four-game homestand, the Aggies face a quick turnaround for their next matchup, a Tuesday night affair in Tucson against No. 9 Arizona. First pitch is scheduled for 6 p.m. MT.
For complete coverage of NM State baseball throughout the Aggies 2022 campaign visit NMStateSports.com - the official home of Aggie athletics - and follow the Aggies on Facebook (NM State Baseball), Twitter (@NMStateBaseball), and Instagram (@NMStateBaseball).