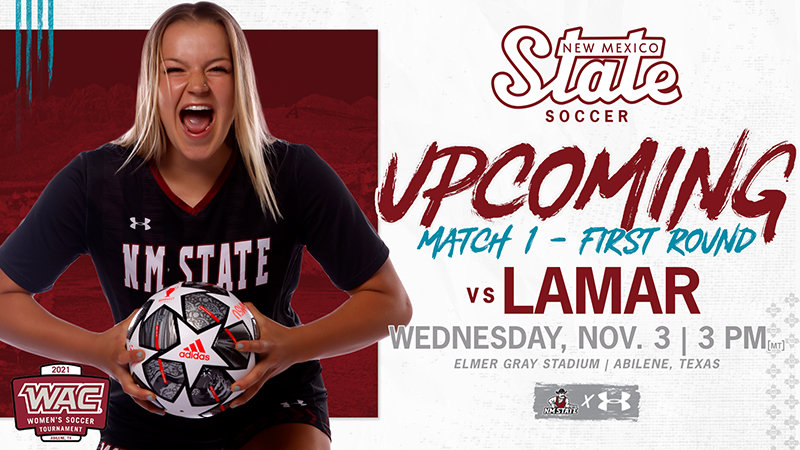 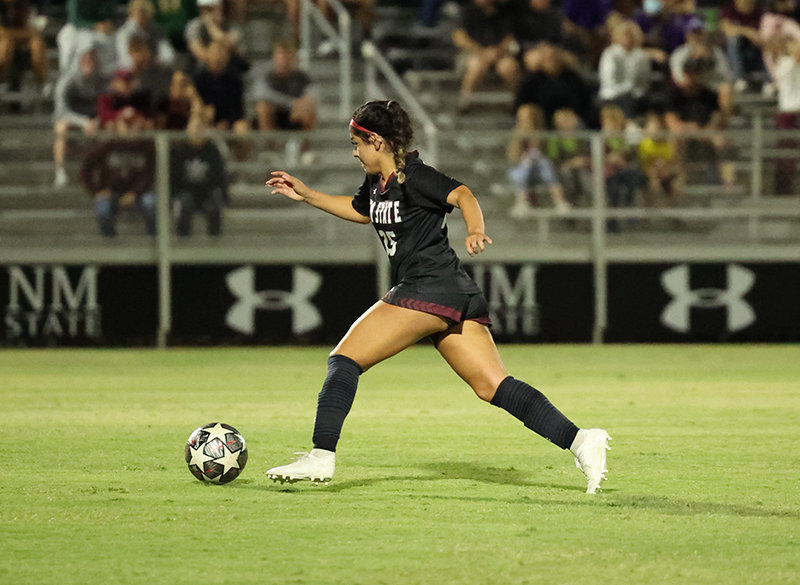 THE KICKOFF
• For the second-straight season and the eighth time in the history of the program, the NM State women's soccer team has made the cut for the WAC Tournament. As the third seed in the league's West Division, the Aggies' tournament run begins at 3:00 p.m. Wednesday afternoon at Elmer Gray Stadium in Abliene, Texas, when they take on second-seeded Lamar.
• ESPN+ and the ESPN app are set to stream the first postseason matchup between the Aggies and Cardinals.

THE SERIES
• Wednesday afternoon's matchup marks the fourth all-time meeting between NM State and Lamar.
• The Aggies own a perfect 3-0 record against the Cardinals with the last meeting between the two clubs coming on Sept. 6, 2015 in Las Cruces. In that game, NM State stormed back from a 3-1 deficit with a trio of goals in the final 8:14 of regulation to earn a 4-3 win.
• NM State has outscored Lamar by a 10-4 margin in the three previous meetings between the two programs.
• Wednesday's match marks the first matchup between NM State and Lamar as WAC adversaries.

LAST TIME OUT | NM State 2, vs. Dixie State 1 | Saturday, Oct. 30
• NM State matched the program's second-highest single-season win total by posting a 2-1 victory over Dixie State last Saturday night at the NM State Soccer Athletics Complex.
• Corey Kizer and Hannah Leitner each netted goals in the Aggies' win with Leitner's score in the 73rd minute serving as the game-winner.
• One of the Aggies' 11 seniors who were taking part in the final home match of their respective careers, goalkeeper Mia Montano received her first start of the season in net. The Bernalillo, N.M., product made a pair of saves in order to secure her first win of the year.
• The win hiked the Aggies' all-time record against Dixie State to 3-0-1.

ABOUT THE AGGIES
• A repeat trip to the WAC Tournament is just one of the highlights for the Aggies under fourth-year head coach Rob Baarts this season. The fall 2021 campaign has so far featured the Aggies win more conference matches in a single season (five) than any other year in program history while generating nine victories - the second-highest single-season win total in NM State lore.
• Baarts and his staff have succeeded in increasing the Aggies' win total every single season during his tenure. After winning just two matches in 2018, the Aggies won four in 2019 and five in the 2021 spring season.
• All told, Baarts has amassed 20 wins through his time as the Aggies' head coach. That win total is the second-highest by any NM State bench boss in program history and Baarts has been directly responsible for 26-percent of the Aggies' 77 victories in their program history.
• Fifteen NM State players have points to their credit this season. Among other WAC clubs, only Grand Canyon (20 players) and SFA (17 players) have more student-athletes who have either scored goals or registered assists in 2021.
• Possessing a varied offense, NM State boasts seven players with multiple goals this season. Among all other WAC teams, only Grand Canyon (10 players) and SFA (nine players) boast more players with multiple goals this year.
• NM State goalkeeper Makenna Gottschalk has been steadily moving up the program's all-time statistical charts in a number of categories. For her career, the Broomfield, Colo., product has amassed 141 saves - the fourth-most in the history of the program. Gottschalk's 82 saves this season rank as the sixth-most in a single season in program history as well as the third-highest total among all WAC goalkeepers.
• In terms of total wins, Gottschalk has eight this season and 11 for her NM State career. Her eight this year are tied for the second-most in a single season in program history while her 11 career victories are the second-most in Aggie lore, too.
• Hannah Leitner is the program's all-time leader in assists with 12 throughout her career in the Crimson and White. Additionally, Leitner ranks seventh all-time on the NM State goal scoring charts with 11 in her career. Four of those goals have been of the game-winning variety, making Leitner fifth all-time in NM State history in that statistical category.
• Like Leitner, both Corey Kizer and Shea O'Connor have booted in 11 goals in their respective NM State careers. That places them in a three-way tie with Leitner for the seventh-highest career goal total in program history.
• Bella Garcia is tied with Leitner for the team lead in game-winning goals this season with two.
• Tuesday afternoon, Leitner, Xitlaly Hernandez, Thalia Chaverria and Mya Hammack were named to various All-WAC teams in a release issued by the league office. Both Hernandez and Leitner carved out a spot for themselves on the All-WAC Second Team while Chaverria and Hammack were two of the members of the WAC's 11-woman All-Freshman Team.
• Each and every member of the Aggies who accounted for points in the team's most recent WAC Tournament run is back for NM State. Kizer has accounted for two goals in her WAC Tournament career while Leitner ranks second on NM State's team in total WAC Tournament points with three (three assists). Megan Ormson (one goal, one assist) also has three points in the WAC Tournament to her credit while Hernandez (one goal) has two. Emma Smith (one assist) has also posted an assist in WAC Tournament play.

SCOUTING LAMAR | ROSTER | SCHEDULE | STATISTICS
• Unbeaten over the course of their last three matches, the Cardinals head to Abilene as the second seed in the WAC's Southwest Division. Lamar has been playing extremely well as of late, owning a 5-1-1 mark over its last seven matches. Through that seven-match stretch, opponents have put in just three goals against the Cardinals.
• The Cardinals are taking aim at their third conference tournament title in the last five seasons when the hit the pitch in Abilene Wednesday afternoon. A former member of the Southland Conference, Lamar won that league tournament in 2017 and 2019 en route to NCAA Tournament appearances.
• On offense Lamar is led by Isela Ramirez who leads the team in both goals (seven) and points (17). In addition to Ramirez, Christina Kitaru poses another goal-scoring threat as she ranks second on the team in goals scored with six.
• Hollie Massey is the third Lamar player who has double-digit points to her credit this season with 13. Her five assists lead the team as well.
• One of the best goalkeepers in the WAC sports Lamar colors. Nicole Panis leads the league in both total saves (99) and saves per game (5.82). All but one of the Cardinals' nine goalkeeping wins belong to Panis, too.
• Lamar has dropped each of its last two neutral-site matches dating back to the 2020 season.