NM State lines up preseason trip to the Bahamas 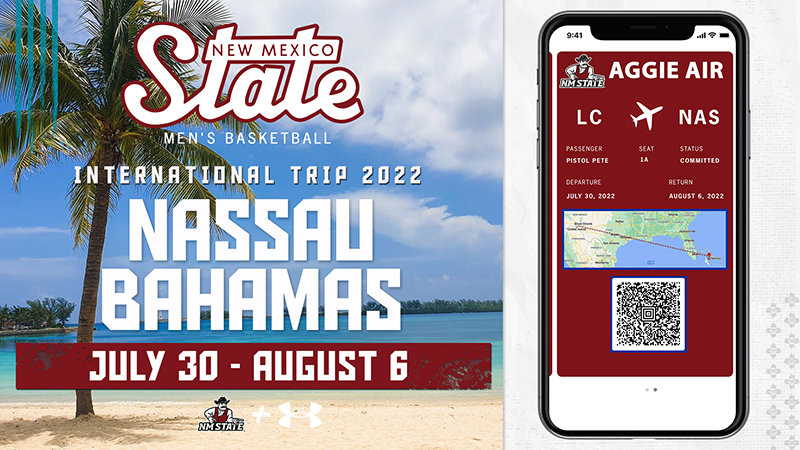 Head Coach Greg Heiar announced Wednesday that he and his squad will be heading to Nassau, Bahamas, to compete in a series of exhibition contests ahead of the 2021-22 season.
Posted Wednesday, June 15, 2022 3:03 pm
NM State Athletics Release

The Aggies' new-look roster will get its first opportunity to create some chemistry against opponents not wearing NM State practice jerseys when they head overseas for a series of preseason exhibition games. Head Coach Greg Heiar announced Wednesday that he and his squad will be heading to Nassau, Bahamas, to compete in a series of exhibition contests ahead of the 2021-22 season. The Aggies will make the trip to the island destination on July 30 with a return date of August 6 set on the itinerary. The team will be staying at the Baha Mar Resort, a five-year-old resort that sits on 1,000 acres and is located on the pristine white sands of Cable Beach on the island of New Providence in The Bahamas. The schedule of games and opponents have yet to be determined. This will mark the first trip to foreign lands since the Aggies competed in the Cayman Islands Classic in 2019. While in The Cayman Islands, the Aggies went 2-1 with wins coming over Colorado State and South Florida. NM State's trip to The Cayman Islands in 2019 was also the only other time in program history that the Aggies ventured to an international land. For complete coverage of NM State men's basketball as the Aggies prepare for the 2022-23 campaign, visit NMStateSports.com - the official home of Aggie athletics - and follow the Aggies on Facebook (NM State Men's Basketball), Twitter (@NMStateMBB) and Instagram (@NMStateMBB).