Aggies and Minutemen both searching for second win of 2021 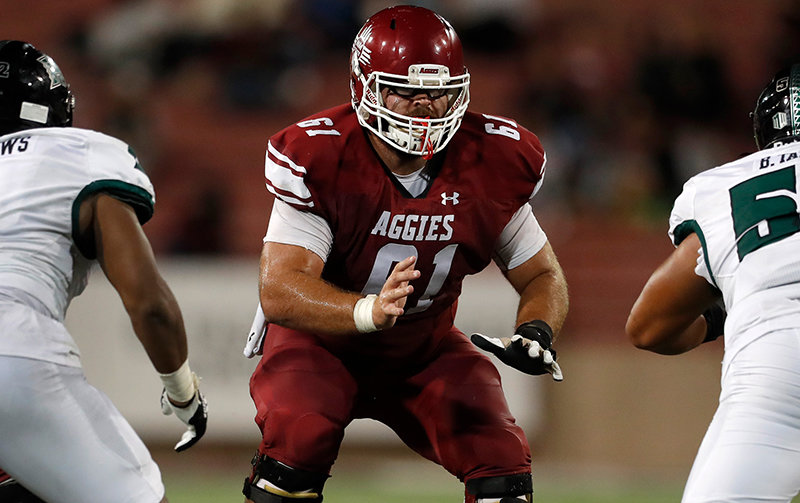 THE KICKOFF
• NM State closes out its 2021 campaign Saturday afternoon at Aggie Memorial Stadium by taking on fellow independent program UMass for the first time in program history. Kickoff is set for 1:00 p.m. MT.
• A multitude of television networks are set to carry the inaugural meeting between the Aggies and Minutemen. Bally Sports Arizona Plus, The CW El Paso/Las Cruces and Comcast New Mexico will televise the clash while FloFootball will carry an online stream of the showdown. Adam Young (play-by-play), Danny Knee (analysis) and Tatiana Favela (sideline reporter) will be on-site to call the action.
• Fans who purchase a $10 ticket for Saturday's season finale will receive two free general admission/upper deck tickets for the NM State men's basketball team's first WAC home game of the season on Saturday, Jan. 1, 2022 against Chicago State.

PICK SIX
• Nine NM State seniors - Jared Wyatt, Robert Downs III, Andre Bodison, Caleb Mills, Austin Reeves, Eli Johnson, Doro Omerhi, David Ash and Sage Doxtater - will all be taking part in their final game in an Aggie uniform Saturday afternoon against UMass.
• Trevor Brohard's 25-yard fumble return touchdown at Kentucky last Saturday made the NM State linebacker the first Aggie defensive player to return a fumble for a touchdown since 2018. That year, Shane Jackson scooped up a loose ball and returned it 34 yards to the house against Texas State on Oct. 27.
• Ethan Albertson matched his career-long for a field goal by drilling a 50-yarder right before the conclusion of the first half at Kentucky last Saturday. Albertson has made his last five field goals tries including a pair of 50-yarders. His 1.45 field goals per game at the most among all FBS independent kickers and rank 23rd in the nation.
• With a team-leading three interceptions in 2021, junior defensive back D.J. McCullough leads all FBS independent players in picks this year. That total is the 22nd-highest among FBS players from all around the nation and make him one of three Aggies with multiple interceptions this year.
• Jared Wyatt (503) and Isaiah Garcia-Castaneda (511) are the first Aggie duo since 2018 to each record 500 yards receiving in a season. The last duo to accomplish this was Johnathan Boone and OJ Clark. Boone had 715 yards while Clark had 512.
• Linebacker Chris Ojoh continues to shine in his first season with the Crimson and White. Ojoh now has 63 tackles on the season and 13.0 tackles for loss. He's the first Aggie since Rashie Hodge Jr to have 10 TFLs in a season (2019).

NIFTY FIFTY
• Ethan Albertson has connected on 50-yard field goals in back-to-back games. His 50-yard make in the first quarter at third-ranked Alabama on Saturday, Nov. 13, gave NM State a 3-0 lead.
• It marked the first time Alabama trailed to a non-SEC opponent at home since trailing Chattanooga 3-0 at the end of the first quarter on Nov. 19, 2016.

SEASON FINALE
• NM State has won their final game of the season three times under head coach Doug Martin. Most recently, the Aggies collected a 36-29 triumph over Dixie State at the Sun Bowl in El Paso, Texas, to cap off a two-game spring 2021 season.
• Martin also led the team to season-ending wins in 2013 (24-16 over Idaho at Aggie Memorial Stadium) and in 2017 with a 26-20 victory over Utah State in the NOVA Home Loans Arizona Bowl.

NOTABLES vs. KENTUCKY | Saturday, Nov. 20, 2021
• Another trio of pass breakups hiked Syrus Dumas' season total to a team-leading eight.
• Trevor Brohard put forth a monstrous effort in defense, finishing with seven tackles including 1.5 tackles for loss at a 1.0 sacks. He also forced a fumble on the Wildcats' opening drive and took it 25 yards in the other direction for a touchdown to give NM State a 7-0 lead. It marked the second-straight week that the Aggies scored first against SEC opposition.
• For the fourth straight week kicker Ethan Albertson kicked a career-best field goal. After hitting a 44 yard field goal at Hawai'i, a 45 yarder against Utah State, Albertson nailed 50-yarders against both Alabama and Kentucky. With three field goal makes against Kentucky, Albertson is now 16-of-21 on the season. His 16 makes are the second-most in a single season in the history of the program and with one more make he would tie Dat Ly for the most makes in a single-season in NM State history.
• JJ Dervil picked off a pass for his first interception of the season. With that pick, NM State has six defensive players who have posted interceptions in 2021. That's the most since seven different Aggies registered picks in 2017.

SCOUTING UMASS | ROSTER | SCHEDULE | STATISTICS
• Like NM State, UMass is going in search of its second win of the season Saturday afternoon at Aggie Memorial Stadium.
• UMass' lone victory of 2021 came on Saturday, Oct. 9, when they took down UCONN by a score of 27-13 in Amherst, Mass. After being limited to single-digit point totals in four of their first seven games, the Minutemen have hit double-digits in the scoring column for four consecutive games.
• Redshirt freshman quarterback Garrett Dzuro took over for Brady Olson under center last Saturday against Army and went 7-of-13 with a touchdown and two interceptions in UMass' 33-17 setback to the Black Knights.
• Gerrell Johnson (76) and Da'Shon Ross (73) top the Minutemen's charts in total tackles this season.
• UMass comes to Las Cruces hoping to put an end to a 16-game losing streak in true road games. The Minutemen's last true road win came on Oct. 27, 2018, when they scored a 22-17 victory at UCONN.

COMING UP NEXT
• Saturday's game marks the final tilt for NM State in the 2021 season. Following Saturday, the Aggies will turn their attention to the 2022 campaign.