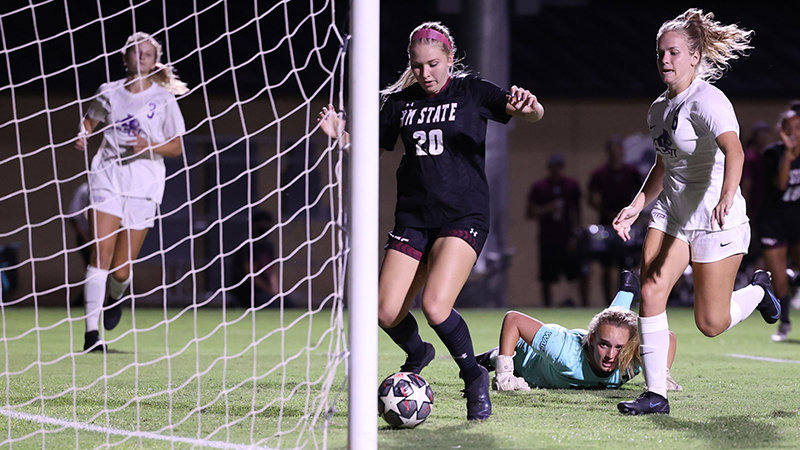 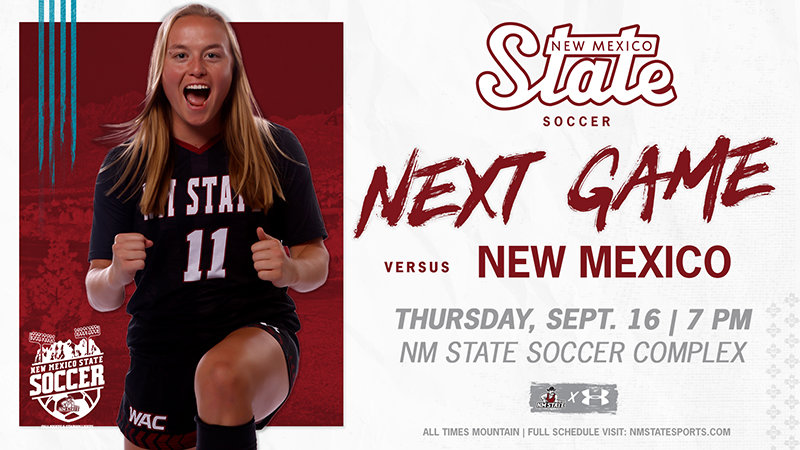 THE KICKOFF
• Back in Las Cruces for the first time in almost one month, the NM State women's soccer team sets its sights on its second rivalry showdown of the season when in-state foe New Mexico pays a visit to the NM State Soccer Athletics Complex.
• The 10th all-time meeting between the two programs is set to begin at 7:00 p.m. Thursday night. Tickets will be available both at the link above and at the gates. Admission is set at $7 for adults and all kids age 12 and under will be admitted free of charge.

THE SERIES
• With the exception of the 2020-21 season (a campaign which was shifted to the spring of 2021 due to the COVID-19 pandemic), NM State and New Mexico have met on the pitch every year since the inception of Aggie women's soccer.
• In that time, NM State holds a 1-8 (.111) record against its in-state rivals. The Aggies' lone victory over New Mexico came on August 24, 2017 in Las Cruces as Audriana Chavez booted in the game-winning goal with 43 seconds remaining in regulation. That goal lifted NM State to a 1-0 win over its in-state rivals.
• Seven of the nine meetings between the two clubs have been decided by a single goal. That includes four of the last five showdowns.
• New Mexico has outscored NM State 16-2 in the all-time series.

AGGIE UPDATE
• After winning their first three matches of the year, NM State has dropped three of its last four.
• The Aggies' last six matches have been on the road. NM State has gone 3-3 in those matches and is one win away from matching the program record for most true road wins in a single season (four).
• With the exception of the spring 2021 season in which the Aggies were prohibited from playing any matches in the state of New Mexico due to in-state COVID-19 restrictions, NM State's three non-conference home matches this season are tied for the fewest in program history. In all, the Aggies will play eight home matches this year - the second-fewest in program history.
• Junior forward Hannah Leitner currently leads the Western Athletic Conference (WAC) in both assists (four) and assists per game (0.57). The Tucson, Ariz., product is also the program's all-time leader in assists with 12.
• Leitner also tops the Aggies' charts in terms of goals (two) and points (eight).
• Six Aggies have scored goals in 2021 and of those six three have multiple goals to their credit. Corey Kizer, Leitner and Shea O'Connor are tied for the team lead with two goals each.
• Senior goalkeeper Makenna Gottschalk ranks second in the WAC with two shutouts. Her goals against average of 1.45 stands as the fourth-best among all WAC netminders.
• NM State has already picked up more non-conference wins this season (four) than they have in nearly any other season in program history. The Aggies' 2011 team secured a program-best eight non-conference wins while the 2010 and 2017 teams amassed six non-conference victories each.
• With a win over New Mexico Thursday night, NM State will have multiple wins over Mountain West programs in a single season for the first time in program history. Earlier this season, the Aggies took down Mountain West foe Nevada by a 3-2 score. That win represented head coach Rob Baarts' first over an MWC foe in his tenure at NM State and the programs first victory over a Mountain West club since August 24, 2017 (New Mexico).

SCOUTING NEW MEXICO | ROSTER | SCHEDULE | STATISTICS
• Hoping to extend their winning streak to four matches, the Lobos roll into Las Cruces sporting the Mountain West's best scoring offense (2.50 goals per game) as well as the league's highest points per game average (7.17).
• As they Lobos seek their third consecutive triumph over the Aggies, they'll rely on the best scoring duo in the Mountain West - Jadyn Edwards and Zaria Katesigwa - to do so. Both players have amassed four goals (second-most in the Mountain West), with Edwards doing so on a high-volume type of game.
• Edwards tops the Mountain West charts in both shots per game (4.67) and shots on goal per game (2.33). Her 10 points also lead the league as does per points per game average of 1.67.
• In net, the Lobos have been going with the duo of Emily Johnson and Malia Vanisi. Both possess identical goals against averages of 1.33 per game while Johnson recorded the team's first clean sheet in its 2-0 triumph over Grand Canyon last Sunday afternoon. In that tilt, Johnson stopped all four shots she faced.
• New Mexico is the favorite to capture the 2021 Mountain West women's soccer regular season title. The Lobos gathered up nine of the 12 available first-place votes in the league's
preseason poll and are seeking their second-straight Mountain West crown. Last season, New Mexico made the cut for the NCAA Tournament for the first time since 2011 and became the first Mountain West club to move on to the second round since 2012.

COMING UP NEXT
• An opportunity to earn the program's fist victory over a WCC institution comes Sunday afternoon at 1:00 p.m. when NM State plays host to Gonzaga. Kickoff at the NM State Soccer Athletics Complex in the inaugural meeting between the two programs is set for 1:00 p.m.