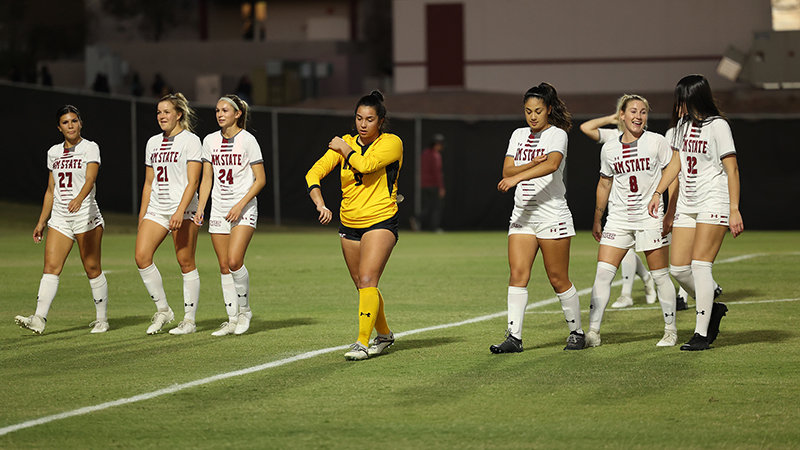 Eleven members of the NM State women's soccer team played in the final home match of their careers Saturday night and the Aggies made sure to celebrate its team leaders by posting a hard-fought victory.

Corey Kizer and Hannah Leitner scored goals and the Aggies sent out their 11-woman senior class with a 2-1 victory over Dixie State Saturday night at the NM State Soccer Athletics Complex.

The win allowed the Aggies' senior class to exit with a victory in the final home match of their respective careers. It also allowed the Aggies to collect a win prior to their WAC Tournament opener Wednesday afternoon.

SCORING SUMMARY
15' | A senior-to-senior connection yielded the Aggies' first goal of the night. Emma Smith fired a long pass up field to Corey Kizer who worked her way past Dixie State's back line. After settling down Smith's pass, Kizer fired her team-leading third goal into the upper left corner of the Trailblazers' net to stake the hosts to a 1-0 lead.
73' | Hannah Leitner matched Kizer for the team lead in goals scored late in the second half with a strike that served as the eventual game-winner. A long cross pinballed around a pair of Dixie State defenders, but Leitner somehow sandwiched her way through the Trailblazers' back-line players and headed in a shot while falling out of bounds that found its way past Dixie State netminder Adelle Brown.
76' | Dixie State made things interesting by cutting the Aggies' lead to one. The Trailblazers' goal scoring leader, Kalea Woodyatt, accepted a pass from Shaylynn Uyeshiro, worked her way past the Aggies' back line and ripped a hard shot past a diving Mia Montano which cut the Aggies' lead to 2-1.

KEY PERFORMERS/STATISTICS OF NOTE
• Getting the start between the pipes in the final home game of her career, Montano played all 90 minutes and made a pair of saves in order to earn her first victory over the season.
• NM State owned a 10-6 advantage in shots over their foes from Utah and put six of its 10 shots on frame.
• The Aggies' all-time record against Dixie State moved to 3-0-1 with Saturday night's victory.
• Kizer's goal was the 11th in her career, giving her the seventh-highest career goal total in the history of the program. Keeping pace with Kizer for seventh place on the Aggies' all-time goals list was Leitner who also netted the 11th of her career.
• With the win, NM State increased its total number of WAC triumphs this season to five. That's the most conference wins by an NM State squad in a single season in program history.
• NM State hiked its win total to nine with Saturday night's victory, too. Those nine wins are tied for the second-most in a single season in program history.
• Saturday night's match represented the final one of the season for Dixie State who was not eligible to compete in the WAC Tournament.

COMING UP NEXT
• For the second-straight season, NM State sets its sight on a WAC Tournament title. As the third seed in the WAC's West Division, NM State will begin its tournament run Wednesday afternoon at 3:00 p.m. at Elmer Gray Stadium in Abilene, Texas, by taking on Lamar.